The Mark 13 guided missile launching system (GMLS) is a single-arm missile launcher designed for use on frigates and other military vessels. Because of its distinctive single-armed design, the Mark 13 is often referred to as the "one-armed bandit."

The Mark 13 is equipped to fire the RIM-66 Standard, RGM-84 Harpoon, and RIM-24 Tartar missiles for anti-air and anti-ship defense, and is capable of firing the Standard at a rate of one every eight seconds.[2] Its 40-round magazine consists of two concentric rings of vertically stored missiles, 24 in the outer ring and 16 in the inner. Total capacity was reduced by 1 due to a requirement to carry a Guided Missile Training Round (GMTR) in order to test system functionality. In case of a fire, the system is equipped with magazine sprinkling, CO2 suppression and booster suppression. It is also equipped with a dud jettison function to eject a round overboard if it fails to fire.[1]

The Mark 22 guided missile launching system (GMLS) is a variation of the Mark 13 launcher which has only the inner 16 round storage ring of the Mark 13 launcher.[2] It was deployed on US-designed, Baleares-class Spanish frigates.[4] and US Navy Brooke class frigates. Another major difference is that on the Mark 22 the magazine is non-rotating. The launcher rotates over the desired missile and it is then hoisted onto the rail. On the Mark 13 the magazine rotates under the launcher.[5]

Training round (GMTR) loaded for testing aboard HMAS Adelaide

Elevated viewpoint of the Mark 13 launcher aboard USS Doyle 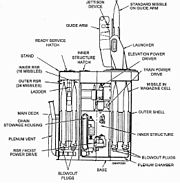 Retrieved from "https://military.wikia.org/wiki/Mark_13_missile_launcher?oldid=4534332"
Community content is available under CC-BY-SA unless otherwise noted.