The Mil Mi-26 (Russian: Миль Ми-26, NATO reporting name: Halo), given the product code izdeliye 90, is a Soviet/Russian heavy transport helicopter. In service with civilian and military operators, it is the largest and most powerful helicopter ever to have gone into production.

Following the incomplete development of the heavier Mil Mi-12 (prototypes known as Mil V-12) in the early 1970s, work began on a new heavy-lift helicopter, designated Izdeliye 90 ("Project 90")[1] and later allocated designation Mi-26. The new design was required to have an empty weight less than half its maximum takeoff weight.[2] The helicopter was designed by Marat Tishchenko, protégé of Mikhail Mil, founder of the OKB-329 design bureau.[3]

The Mi-26 was designed as a heavy-lift helicopter for military and civil use, and was to replace earlier Mi-6 and Mi-12 heavy lift helicopters, with twice the cabin space and payload of the Mi-6, then the world's largest and fastest production helicopter. The primary purpose was to move military equipment like 13 metric ton (29,000 lb) amphibious armored personnel carriers, and mobile ballistic missiles, to remote locations after delivery by military transport planes such as the Antonov An-22 or Ilyushin Il-76.

The Mi-26 was the first factory-equipped helicopter with a single, eight-blade main lift rotor. It is capable of flight in the event of power loss by one engine (depending on aircraft mission weight) thanks to an engine load sharing system. While it is only slightly heavier than the Mi-6, the Mi-26 can lift up to 20 metric tons (44,000 lb). It is the second largest and heaviest helicopter ever constructed, after the experimental V-12. The tail rotor has about the same rotor diameter and thrust of the four-bladed MD 500 main rotor.[5]

The Mi-26's unique main gearbox is relatively light but can absorb 19,725 shp, which was accomplished using a non-planetary, split-torque design. Because Mil's normal gearbox supplier said that such a gearbox could not be designed, the Mil Design Bureau designed the VR-26 transmission itself.[6] In July 2010 a proposed Russian-Chinese development of a 33-ton heavy-lift helicopter was announced.[7]

The Russian helicopter manufacturer, Rostvertol, is in the process of refurbishing and upgrading the entire fleet of Mi-26s serving in the Russian Air Force. The fleet is estimated to number around 20 helicopters. Refurbished and upgraded aircraft will be comparable to an up-to-date variant: Mi-26T. Contract completion is planned for 2015. The same contract covers the manufacture of 22 brand new Mi-26T helicopters. As of January 2012, eight new-production helicopters have been delivered to operational units.[8]

The developers of the Buran space vehicle programme considered using a couple of Mi-26 helicopters to "bundle" lift components for the Buran spacecraft, but test flights with a mock-up showed how risky and impractical that was.[9]

The Mi-26S was a disaster response version hastily developed after the Chernobyl nuclear accident in 1986.[10] Thirty Mi-26 were used for radiation measurements and precision drops of insulating material to cover the damaged No. 4 reactor. It was also equipped with a deactivating liquid tank and underbelly spraying apparatus. The Mi-26S was operated in immediate proximity to the nuclear reactor, with a filter system and protective screens mounted in the cabin to protect the crew during delivery of construction materials to the most highly contaminated areas.[11]

For three weeks in September 1996, the Russian military loaned four fully crewed Mil Mi-26 helicopters and granted the use of its Anapa airbase to the World Team for its skydiving free fall formation world record attempt. The World Team was made up of top-tier skydivers from over 40 countries and led by Hollywood aerial stunt performer B. J. Worth. With the goal of setting a new 300-way free fall formation record and using the high altitude and high capacity performance of the Mi-26, the World Team quickly flew 300 participants, plus aerial judges, photographers, and cinematographers up to 6,700 metres (22,000 ft), then simultaneously dropped them in a tight formation. The Mi-26 helicopter crews and equipment performed flawlessly in their first experience with close formation flying, and flew away with an assist in the new 297-way world record set on 27 September 1996, just three shy of the objective.

In October 1999, a Mi-26 was used to transport a 25-ton block of ice encasing a well-preserved, 23,000-year-old Woolly Mammoth from the Siberian tundra to a lab in Khatanga, Taymyr, where scientists hoped to study the find and perhaps attempt to clone it. The weight was reportedly so great that the Mi-26 had to be returned to the factory immediately thereafter to check for airframe and rotor warping caused by potential structural over-stressing.[3]

In the spring of 2002, a civilian Mi-26 was leased to recover two U.S. Army MH-47E Chinook helicopters from a mountain in Afghanistan. The Chinooks, operated by the 160th Special Operations Aviation Regiment, had been employed in Operation Anaconda, an effort to drive al Qaeda and Taliban fighters out of the Shahi-Kot Valley and surrounding mountains. They ended up stranded on the slopes above Sirkhankel at altitudes of 2,600 metres (8,500 ft) and 3,100 metres (10,200 ft). While the second was too badly damaged to recover, the first was determined to be repairable and estimated to weigh 12,000 kilograms (26,000 lb) with fuel, rotors, and non-essential equipment removed. That weight exceeded the maximum payload of 9,100 kilograms (20,100 lb) at an altitude of 2,600 metres (8,500 ft) of the U.S. military's Sikorsky CH-53E.[3]

The Mi-26 was located through Skylink Aviation in Toronto, which had connections with a Russian company called Sportsflite that operated three civilian Mi-26 versions called "Heavycopters". One of the aircraft, doing construction and firefighting work in neighboring Tajikistan, was leased for $300,000; it lifted the Chinook with a hook and flew it to Kabul, then later to Bagram Air Base, Afghanistan to ship to Fort Campbell, Kentucky for repairs. Six months later, a second U.S. Army CH-47 that had made a hard landing 100 miles (160 km) north of Bagram at an altitude of 1,200 metres (3,900 ft) was recovered by another Sportsflite-operated Mi-26 Heavycopter.[3]

On 19 August 2002, Chechen separatists hit an overloaded Mi-26 with a surface to air missile, causing it to crash-land in a minefield and killing 127 of the people on board.[12]

As a result of the magnitude 8.0 earthquake in Sichuan province of China on 12 May 2008, many rivers became blocked by giant landslides, resulting in the formation of so-called quake lakes: massive amounts of water pooling up at a very high rate behind the landslide-formed dams, which eventually crumble under the weight of the ever-increasing water mass,[13] and potentially endangering the lives of millions downstream. At least one Mi-26 belonging to a branch of China's civil aviation service was used to bring heavy earthmoving tractors to the most precarious of the quake-lakes at Tangjiashan mountain, located in extremely difficult terrain and accessible only by foot or air.[14]

In July 2009, a Moldovan Mi-26 was shot down in Helmand province with the loss of six Ukrainian crew members. The aircraft, belonging to Pectox-Air aviation, was said to be on a humanitarian mission under NATO contract.[15]

On 14 December 2010, an Indian Air Force Mi-26 crashed seconds after taking off from Jammu Airport, injuring all 9 passengers. The aircraft fell from an altitude of about 50 feet (15 m).[16] The Indian Institute of Flight Safety released an investigation report that stated improper fastening of the truck inside caused an imbalance of the helicopter and led to the crash. The Mi-26 had been carrying machines from Konkan Railway to Kashmir Railway project .[17][18]

On 11 December 2012, a Westland Sea King from No. 330 Squadron RNoAF experienced "technical problems" and made an emergency landing on Mount Divgagáisá. The landing caused parts of the landing gear to break. The Sea King was prepared by removing rotor blades and fuel before it was air lifted to Banak Air Station by a Russian Mil Mi-26 on 23 December 2012.[19]

Mi-26 is extensively used in the rescue operations of Uttarakhand floods affecting the northern part of India in 2013. Airlifting heavy equipments for repairing and re-establishing roads and connectivity. Further many flood affected victims were airlifted using Mi-26.[citation needed]

Democratic Republic of the Congo 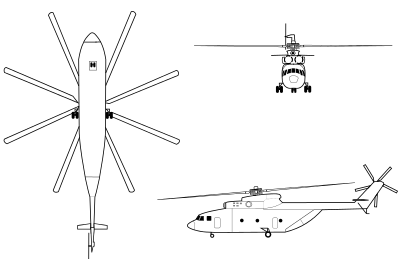