The Mil Mi-8 (Russian: Ми-8, NATO reporting name: Hip) is a Soviet-designed medium twin-turbine transport helicopter that can also act as a gunship. The Mi-8 is one of the world's most-produced helicopters,[1] used by over 50 countries. Russia is the main producer and the largest operator of the Mi-8/Mi-17 helicopter.

Mikhail Mil originally approached the Soviet government with a proposal to design an all new two engined turbine helicopter after the success of the Mil Mi-4 and the emergence and effectiveness of turbines used in the Mil Mi-6 but the military argued against a new helicopter as they were content with the current Mil Mi-4.[2] To counter this Mikhail Mil proposed the new helicopter was more of an update to new turbine engines rather than an entirely new helicopter which the council of ministers decreed shall be built. Due to the position of the engine, this enabled Mikhail Mil to justify redesigning the entire front half of the aircraft around the single engine (designed by Alexander Ivchenko originally made for fixed wing aircraft as all other soviet helicopter turbines had been up to that point). The prototype named V-8 was designed in 1958[2] based on the Mil Mi-4 with a larger cabin.[3] Powered by an AI-24 2,010 kW (2,700 shp) Soloviev turboshaft engine,[4] the single engined V-8 prototype had its maiden flight in June 1961[5][6] and was first shown on Soviet Aviation Day parade (Tushino Air Parade) in July 1961.[7]

During an official visit to the United States in September 1959 Nikita Khrushchev took a flight in the S-58 presidential helicopter for the first time and was reportedly extremely impressed.[8][9] Upon Khrushchev's return he orders the creation of a similar helicopter and wishes it be ready in time for the return visit of the American president to save face.[10] A luxury version of the Mi-4 was quickly created and Khrushchev took an inspection flight where Mikhail Mil proposed that his helicopter in development was more suitable for this role. However, it would be necessary to have a second engine for reliability. This gave Mikhail Mil the power under the orders of Khrushchev to build the original two-engined helicopter which would need purpose built turbine engines created for the first time in Soviet history, rather than those adapted from fixed wing aircraft (as in Mi-6 and the first prototype V-8) and an entirely new main rotor gear box that would be designed in-house for the first time. In May 1960 the order is given for Mikhail Mil to create his twin engine helicopter. The Sergei Isotov Design Bureau accepted the task of creating the engines.

The second prototype (still equipped with the one turbine engine as the Isotov engines were still under development) flew in September 1961. Two months after the engines were completed by Isotov the third prototype designated V-8A equipped with two 1,120 kW (1,500 shp) Isotov TV2 engines, made its first flight piloted by Nikolei Ilyushin on 2 August 1962 marking the first flight of any soviet helicopter to fly with purpose built gas turbine engines.[3] The aircraft completed its factory based testing in February 1963. The fourth prototype was designed as a VIP transport where the rotor was changed from a four blades to five blades in 1963 to reduce vibration and the cockpit doors were replaced by blister perspex slides and a sliding door added to the cabin.[3] The fifth and final prototype was as a mass production prototype for the passenger market. In November 1964 all joint testing had been completed and the soviet government commission orders mass production to start. Production started in the Kazan Production Plant and by the end of 1965 the first aircraft is completed. The Soviet military originally showed little interest in the Mi-8 until the Bell UH-1's involvement in the Vietnam war became widely publicised as a great asset to the United States, allowing troops to move swiftly in and out of a battlefield and throughout the country. It was only then that the soviet military rushed a troop carrying variant of the Mil Mi-8 into production. It was introduced into the Soviet Air Force by 1967 as the Mi-8.

There are numerous variants, including the Mi-8T which is armed with rockets and anti-tank guided missiles, in addition to carrying 24 troops. The Mil Mi-17 export version is employed by around 20 countries; its equivalent in Russian service in the Mi-8M series. The only visible difference between the mi-8 and mi-17 is that the tail rotor is on the starboard side (right side) of the mi-8, whereas in mi-17 it is on the port side. Also Mi-17 also has some improved armour plating for its crew. The naval Mil Mi-14 version is also derived from the Mi-8. The Mi-8 is constantly improving and newest version still remains in production in 2013.

The Yugoslav Mi-8s' first combat operations were transport of army troops and federal police forces to border crossings in Slovenia on 27 June 1991. The members of Slovenian Territorial Defence fired Strela 2 MANPAD, and shot one helicopter down, killing all crew and passengers.

During combat in the winter of 1991 in Croatia and in the spring of 1992 in Bosnia and Herzegovina, Yugoslav People's Army used the Mi-8 fleet for evacutaion of injured personnel, transport of cargo and search and rescue of crews of aircraft forced down. As the most of flights were made behind the front, the Croatian forces were able to down only one helicopter, hit with small arms fire near Slavonski Brod on 4 October 1991.

After Bosnian Serbs declared their state in the spring of 1992, some former Yugoslav Air Force Mi-8s continued service in new armed forces. The inventory of the 82nd mixed helicopter squadron of 92nd aviation brigade of Army of Republika Srpska contains 12 Mi-8T helicopters which continued in service until Operation Koridor. During that period, the Republika Srpska Air Force lost 3 Mi-8 helicopters to enemy fire. Three helicopters painted in a blue and white colour scheme flew in the first part of 56th helicopter squadron of Krajina Milicija, using Udbina military airport in Lika as their main base. The Republika Srpska Air Force continued to operate 9 helicopters, albeit suffering problems with maintenance and spare parts, until it was formally disbanded in 2006.

On the other side, Mi-8 helicopters were also used as main air transport. Croatian National Guard obtained their first on 23 September 1991, near Petrinja, when a Yugoslav Air Force Mi-8 made an emergency landing after being damaged by small-arms fire. A further 6 Mi-8T and 18 Mi-8MTV-1 helicopters were bought from ex-Warsaw Pact countries during the war, but only 16 of those survived the war. The remaining Mi-8Ts were retired from service in the Croatian Air Force after the war, while the Mi-8MTVs continued their service in 20th Transport Helicopter Squadron, and 28th Transport Helicopter Squadron. The latter has been re-equipped with new Mi-171Sh helicopters bought from Russia.

During the 1998–1999 Kosovo war, the Yugoslav Air Force used Mi-8s for transport of personnel and material to forces in otherwise-inaccessible mountain areas. Evacuation of injured personnel also occurred during the 1999 NATO bombing of Yugoslavia, flying at low altitude to avoid detection by NATO aircraft. In 1999, Serbian Mi-8 shot down Hunter UAV. In 2000, an Mi-8 shot down another UAV.[11][12] Two Mi-17V helicopters which were secretly operated by the Unit for Special Operations post-1997 were also active during the Kosovan conflict. After the disbanding of the unit in 2003, the helicopters were transferred to Air Force.

The Finnish Defence Forces and the Finnish Border Guard have been using Mi-8s since the 1970s, with the Finnish Air Force receiving its first, serialed HS-2, on May 28, 1973, and the second, HS-1, on May 31, 1973. Six Mi-8Ts were obtained at first, followed by further two Mi-8Ts and two Mi-8Ps. Three of the helicopters were handed over to the Border Guard Wing. One of these was lost after sinking through ice during a landing in April 1982. It was soon replaced by a new Mi-8. After their Border Guard service, the helicopters were transferred to the civil register, but shortly thereafter to the Air Force. In 1997 it was decided that all helicopters, including the remaining five Mi-8Ts and two Mi-8Ps, should be transferred to the Army Wing at Utti. All Mi-8s have now been replaced with NH90 helicopters. One Mi-8 is on display at the Finnish Aviation Museum in Vantaa, and one is at the Päijänne Tavastia Aviation Museum in Asikkala, near Lahti. The two final Mi-8T copters were given to Hungary in 8/2011 with all remaining spare parts.

Between April and May 1986 many of these machines were used to drop radiation-absorbing materials into the 4th reactor of Chernobyl Nuclear Power Plant after the explosion. Most of them were severely irradiated and abandoned in the giant junkyard (so-called "machines cemetery") near Chernobyl. One crashed near the power plant after hitting the crane's lines; everyone onboard perished.

In Afghanistan, there are several civilian versions flying cargo contracts for the US Army.

On 4 December 2003 a Polish Mi-8 crashed near Piaseczno while carrying Prime Minister Leszek Miller, 10 other passengers and four crewmen. There were no fatalities. The cause of the accident was the icing of the engines. The pilot, Major Marek Miłosz was accused of causing the disaster, but he was found not guilty.

On July 2, 2008, two Mi-17 were used to rescue 15 hostages during the Operation Jaque performed by the Colombian military.

On 19 July 2009 a Mil Mi-8 helicopter crashed at Kandahar Airport during takeoff, killing 16 and injuring 5. The helicopter was owned by Vertikal-T, a Russian air transportation company.

On 21 December 2012, a Mi-8 working for the United Nations Mission in South Sudan (UNMISS) was shot down and crashed near Likuangole in the South Sudanese state of Jonglei during the South Sudan internal conflict. All four Russian crewmembers onboard were killed, and after some initial confusion, a UN spokesman said that the South Sudanese army confirmed on 22 December that it mistakenly fired at the helicopter.[14][15]

On 9 March 2013, a UTair Aviation owned Mi-8 working for the United Nations crashed due to the weather, killing its entire four-man Russian crew. The location of the crash was near Bukavu in South Kivu province.[16][17][18][19][20] The bodies were found at the site of the crash.[21]

On 16 August 2013 the Ministry of Defense of Ukraine reported that one of their Mi-8's (on August 15 at the Kirovske military airfield) had set a world altitude record of 9,150 meters.[22]

V-8 (NATO – Hip-A)
The original single-engined prototype.
V-8A
A twin-engined prototype, featuring TV2-117 turboshaft engines, the prototype underwent further modifications during its life.
V-8AT
Prototype of the Mi-8T utility version.
Mi-8 (NATO – Hip-B)
Twin-engined prototype.
Mi-8TG
Conversion to operate on LPG gas.
Mi-18
Prototype design, a modification of the existing Mil Mi-8. Two Mi-8s were extended by 0.9 meters (3 ft), the landing gear made retractable, and a sliding door added to the starboard side of the fuselage. The Mi-18s were used in the Soviet invasion of Afghanistan, and later used as static training airframes for pilots of the Mi-8/17.

Mi-8IV (NATO – Hip-G, a.k.a. Mi-9)
Airborne command post version fitted with "Ivolga" system, characterized by antennas, and Doppler radar on tail boom.
Mi-8PP (NATO – Hip-K)
Airborne jamming platform with "Polye" (field) system. From 1980, the type was fitted with the new "Akatsiya" system and redesignated the Mi-8PPA. It is characterized by six “X”-shaped antennas on each side of the aft fuselage. Built to escort troop-carrying versions of this helicopter, and disrupt potentially-nearby SPAAG radars, such as those of the Flakpanzer Gepard.
Mi-8PD
Polish airborne command post version.
Mi-8SMV (NATO – Hip-J)
Airborne jamming platform with "Smalta-V" system, characterized by two small boxes on each side of the fuselage. Used for protection of ground attack aircraft against enemy air defenses.
Mi-8VPK (NATO – Hip-D, a.k.a. Mi-8VzPU)
Airborne communications platform with rectangular communication canisters mounted on weapons racks and with two frame-type arials above the rear fuselage. 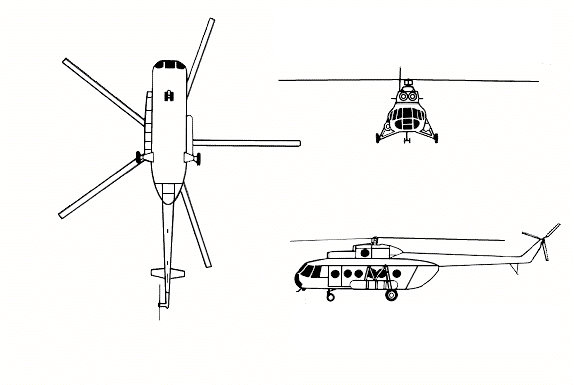 The initial version of this article was based on material from aviation.ru. It has been released under the GFDL by the copyright holder.

Retrieved from "https://military.wikia.org/wiki/Mil_Mi-8?oldid=5023339"
Community content is available under CC-BY-SA unless otherwise noted.