MACV was created on 8 February 1962, in response to the increase in United States military assistance to South Vietnam. MACV was first implemented to assist the Military Assistance Advisory Group (MAAG) Vietnam, controlling every advisory and assistance effort in Vietnam, but was reorganized on 15 May 1964 and absorbed MAAG Vietnam to its command when combat unit deployment became too large for advisory group control.[3] MACV was disestablished on 29 March 1973.[3]

Major component commands of MACV were:[4]

COMNAVFORV also commanded the Naval Advisory Group and the Seabees of the 3d Naval Construction Brigade; the Military Sea Transportation Service Office, Vietnam, which coordinated the gargantuan sealift to Southeast Asia; the Officer in Charge of Construction, Vietnam, who handled in-country construction by civilian contractors; the Naval Research and Development Unit, Vietnam, which tested new equipment in the field; and Commander Coast Guard Activities, Vietnam.

The Commander, U.S. Military Assistance Command, Vietnam was known by the abbreviation COMUSMACV (/ˌkɒm.juːɛsˌmækˈviː/ "com-U.S.-mack-vee").[5] COMUSMACV was in one sense the top person in charge of the U.S. military on the Indochinese peninsula; however, in reality, the CINCPAC and the U.S. ambassadors to Vietnam, Laos, and Cambodia also had "top person in charge" status with regard to various aspects of the war's strategy.[6]

With the signing of the Paris Peace Accords all American and third country forces were to be withdrawn within 60 days of the cease-fire. MACV was therefore disbanded on 29 March 1973.[3]

The Defense Attaché Office Saigon was organized according to requirements established by the Joint Chiefs of Staff, CINCPAC, and MACV, and was activated on 28 January 1973.[7]

DAO Saigon was a unique organization. It performed the traditional functions of a defense attaché, managed American military affairs in Vietnam after the cease-fire including the programs for the support of South Vietnam's armed forces, administered procurement contracts in support of the RVNAF, and furnished housekeeping support to Americans remaining in Vietnam after the ceasefire. Aside from the support of the RVNAF, it reported on operational matters, such as violations of the cease-fire, and produced intelligence information on which subsequent decisions concerning the Military Assistance Program and American interests in Southeast Asia could be based.

The DAO occupied the offices turned over to it by the MACV adjacent to Tan Son Nhut Airport and most of its employees and officials conducted their work from those offices. Small field offices were located in Da Nang, Pleiku, Qui Nhon, Nha Trang, Bien Hoa, Long Binh, Nha Be, Dong Tam, Binh Thuy, and Can Tho.

To perform the traditional representational and information-collecting functions of military attaches, five professional attaches – two Army, two Air Force, and one Navy – were assigned to the DAO with offices in the United States Embassy, Saigon. The senior member of this group was the assistant defense attaché, an Army colonel who reported to the Defense Intelligence Agency in Washington through attache channels. The attaches made frequent visits to the field where they observed RVNAF units and activities and reported those observations to the defense attaché and to Washington.

Three divisions within DAO managed the complex military assistance programs for the ARVN, the VNAF, and the Vietnamese Navy: the Army, Air Force, and Navy Divisions.

Despite its broad responsibilities, DAO was authorized only 50 military and 1,200 civilians. It was also told to plan for an early reduction in strength and disestablishment, the latter expected to occur within a year. To accomplish its mission while planning on phasing out, DAO had to employ contractors to perform many functions. The contracts, however, were also to be reduced in number and scope throughout the year. When DAO Saigon became operational upon the disestablishment of MACV, no fewer than 383 separate contracts were on the books with a total value of $255 million. Over 23,000 people were employed by contractors in South Vietnam, of whom over 5,000 were Americans, 16,000 were Vietnamese, and the remainder were third-country nationals. By mid-year of 1973 the total was reduced by half. More than half the American contract employees were involved in training programs for the RVNAF. Of these, more than half were involved in aircraft maintenance, another large group was in communications and electronics, and the rest worked in technical fields ranging from vehicle repair and overhaul to ship overhaul and maintenance. Although most contract employees were located in the Saigon region, sizable groups were at the air bases at Da Nang, in Military Region 2 at Pleiku, Phu Cat, and Phan Rang, and at Binh Thuy, the VNAF air base near Can Tho in MR 4.

The cease-fire agreement in Vietnam signaled the end of the American advisory effort. The senior officials of DAO avoided offering operational advice to the Vietnamese with whom they worked intimately and continuously. The technical assistance provided by the military and senior civilian officials of DAO and by the contractors was essential to the RVNAF's modernization and expansion, but the South Vietnamese military would get no advice on military operations, tactics, or techniques of employment.

Following the closure of MACV and the establishment of the DAO, the MACV Headquarters became the DAO Compound.

The two major evacuation points chosen for Operation Frequent Wind were the DAO Compound for American civilian and Vietnamese evacuees and the United States Embassy, Saigon for Embassy staff.[9]

At 03:30 on 29 April 1975 a PAVN rocket hit Guardpost 1 at the DAO Compound, instantly killing Marine Corporals McMahon and Judge, they would be the last American ground casualties in Vietnam.

At 13:50, 2 UH-1 Huey helicopters carrying General Carey and Colonel Gray (commander of Regimental landing Team 4 (RLT4)) landed at the DAO Compound. During their approach to the compound, they experienced a firsthand view of the PAVN's firepower as they shelled nearby Tan Son Nhut Airport with ground, rocket, and artillery fire. They quickly established an austere command post in preparation for the arrival of the Marine CH-53s and the ground security force.[10]

"Alpha" command group, two rifle companies, and the 81mm mortar platoon were deployed around the DAO Headquarters building (the Alamo) and its adjacent landing zones. Companies E and F respectively occupied the northern and southern sections between the DAO Headquarters and the DAO Annex. "Bravo" command group, consisting of two rifle companies and the 106mm recoilless rifle platoon, assumed responsibility for security of the DAO Annex and its adjoining landing zones. Company G occupied the eastern section of the Annex, while Company H assumed control of the western section.[12]

The HMH-462 CH-53s loaded with evacuees and left the compound they unloaded the first refugees delivered by Operation Frequent Wind at 15:40.[13]

At about 17:30 General Carey ordered the extraction of 3rd Platoon, Company C of BLT 1/9, which had been landed at the DAO Compound on 25 April to assist the Marine Security Guard.[9]

Between 19:00 and 21:00 General Carey transferred 3 platoons (130 men) of BLT 2/4 into the Embassy Compound to provide additional security and assistance for the Embassy.[14]

At 19:30 General Carey directed that the remaining elements guarding the Annex be withdrawn to DAO Headquarters (the Alamo) where the last of the evacuees would await their flight. Once completed, the new defensive perimeter encompassed only LZ 36 and the Alamo. By 20:30 the last evacuees had been loaded onto helicopters.[15]

At 22:50, with the evacuation of the landing control teams from the Annex and Alamo completed, General Carey ordered the withdrawal of the ground security forces from the DAO Compound.[15]

At 00:30 on 30 April, Thermite grenades, having been previously placed in selected buildings, ignited as two CH-53s left the DAO parking lot carrying the last elements of 2nd Battalion 4th Marines.[15] 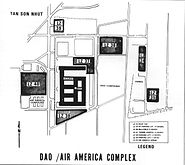 A Marine provides security as helicopters land at the DAO Compound

Vietnamese evacuees board a CH-53 at LZ 39

Retrieved from "https://military.wikia.org/wiki/Military_Assistance_Command,_Vietnam?oldid=4650387"
Community content is available under CC-BY-SA unless otherwise noted.