Musketeers of the Guard

They were founded in 1622 when Louis XIII furnished a company of light cavalry (the carabins, created by Louis' father Henry IV) with muskets. The Musketeers fought in battle both on foot (infantry) and on horseback (cavalry). They formed the royal guard for the king while he was outside of the royal residences (within the royal residences, the king's guard was the Garde du corps and the Gardes suisses).

The Musketeers were among the most prestigious of the military companies of the Ancien Régime, and in principle membership in the companies was reserved for nobles. With the reforms of Michel le Tellier – which mandated a certain number of years of military service before nobles could attain the rank of officer – many nobles sought to do this service in the privileged Musketeer companies.

In 1776, the Musketeers were disbanded by Louis XVI for budgetary reasons. Reformed in 1789, they were disbanded again shortly afterward during the French Revolution. They were reformed on July 6, 1814, and definitively disbanded on January 1, 1816.

Notable Musketeers of the Guard[]

The following are some of the notable Musketeers:

Musketeers in the storming of Valenciennes. March 17, 1677. A fragment of the picture.

Musketeers in the storming of Ghent, 1678. A fragment of the picture.

Review of Black Musketeers in the plain of Sablons. By Robert Paul Ponce Antoine, 1729 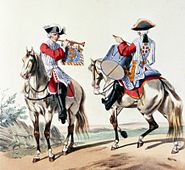 Musicians of the Musqueteers oh the Guard in 1724. Oboeist of the 2nd company and drummer of the 1st company