For similar forces in other countries, see Gendarmerie (disambiguation).

In France, the National Gendarmerie (French language: Gendarmerie nationale, French pronunciation: ​[ʒɑ̃daʁməʁi nasjɔnal]) is a branch of the French Armed Forces, in charge of public safety, with police duties among the civilian population. It also contains a military police force and a special forces component (GIGN). It has a strength of more than 98,155 personnel in 2011.[2] The Gendarmerie works with the other national law enforcement agency, the Police Nationale, and from 2009, although it is a part of the armed forces establishment, it is now a part of the Ministry of the Interior as its military component and forms part of its operations and budget. It is mandated to fulfill national security duties and duties in support of its parent ministry.

One of the oldest institutions[edit | edit source]

The Gendarmerie is the direct descendant of the Marshalcy of the ancien regime, more commonly known by its French title, the Maréchaussée.

Another organisation, the Constabulary (French: Connétablie), was under the command of the Constable of France. The constabulary was regularised as a military body in 1337.

In 1720, the Maréchaussée was officially attached to the Household of the King (Maison du Roi), together with the "gendarmerie" of the time, which was not a police force at all, but a royal bodyguard. During the eighteenth century, the marshalcy developed in two distinct areas: increasing numbers of Marshalcy Companies (compagnies de marechaussée), dispersed into small detachments, were dotted around the French countryside providing law and order, while specialist units provided security for royal and strategic sites such as palaces and the mint (e.g. the garde de la prévôté de l'hôtel du roi and the prévôté des monnaies de Paris.)

While its existence ensured the relative safety of French rural districts and roads, the Maréchaussée was regarded, in contemporary England (which had no effective police force of any nature), as a symbol of foreign tyranny. In 1789, on the eve of the French Revolution, the Maréchaussée numbered 3,660 men divided into small brigades (a "brigade" in this context being a squad of ten to twenty men.)

During the revolutionary period, the Maréchaussée commanders generally placed themselves under the local constitutional authorities. Despite their connection with the king, they were therefore perceived as a force favouring the reforms of the French National Assembly.

In 1791 the newly named gendarmerie nationale was grouped into 28 divisions, each commanded by a colonel responsible for three départements. In turn, two companies of gendarmes under the command of captains were based in each department. This territorial basis of organisation continued throughout the 19th and 20th centuries.

Under Napoléon, the numbers and responsibilities of the gendarmerie, renamed gendarmerie impériale, were significantly expanded. In contrast to the mounted Maréchaussée, the gendarmerie comprised both horse and foot personnel; in 1800 these numbered approximately 10,500 of the former and 4,500, respectively.

In 1804 the first Inspector General of Gendarmerie was appointed and a general staff established - based in the rue du Faubourg-Saint-Honore in Paris. Subsequently special gendarmerie units were created within the Imperial Guard, and for combat duties in French occupied Spain.

Following the Second Restoration of 1815, the gendarmerie was reduced in numbers to about 18,000 and reorganised into departmental legions. Under King Louis Phillippe a "gendarmerie of Africa" was created for service in Algeria and during the Second Empire the Imperial Guard Gendarmerie Regiment was re-established. The majority of gendarmes continued in what was now the established role of the corps - serving in small sedentary detachments as armed rural police. Under the Third Republic the ratio of foot to mounted gendarmes was increased and the numbers directly incorporated in the French Army with a military police role reduced.[3]

In 1901, the École des officiers de la gendarmerie nationale was established to train its officers.

Five battles are registered on the flag of the Gendarmerie:

The gendarmerie is sometimes referred to as the maréchaussée (an old name for the service), and the gendarmes as pandores. The symbol of the gendarmerie is a grenade, which is also worn by the Italian Carabinieri and the Grenadier Guards in Britain. The budget in 2008 was approximately 7.7 billion euros.[4]

To fulfill the tasks pertaining to internal security, the Minister of the Interior, Internal Security and Local Rights is responsible for the use of the services of the National Gendarmerie. "To this end and in relation with the Minister of Defence, the Minister outlines the duties of the Gendarmerie services, save for the tasks related to criminal investigation, determines the conditions of fulfillment of these duties and the resulting terms of organisation" (decree dated 15 May 2002).[2]

While administratively a part of the French armed forces, and therefore under the purview of the Ministry of Defence, the Gendarmerie is operationally attached to the Ministry of the Interior for its operations within France, and criminal investigations are run under the supervision of prosecutors or investigating magistrates. Its members generally operate in uniform, and, only occasionally, in plainclothes.

In 2002, in accordance with commitments made by Jacques Chirac at the time of his campaign for the 2002 presidential election, the Gendarmerie were attached to the Ministry of the Interior for their duties within France. The gendarmes however retained their military status. The brigades were reorganised and were given a broader sphere of activity. New legislation resulted in a new distribution of Gendarmerie and the police force in France.

The Director-general of the Gendarmerie is appointed by the Council of Ministers, with the rank of Général d'Armée. The current Director-General is Général Denis Favier.

The headquarters of the force, called the Directorate-General of the National Gendarmerie, had been located since 1969 at rue St Didier in the XVI° district of the Paris Metropolis. As it grew, expansion was necessary, and now includes eleven other sites distributed throughout the capital and the outskirts of the city.

The Directorate-General of the national gendarmerie includes: - the general staff, divided into offices and services, - one inspectorate of gendarmerie (IGN), - the inspector-general - three services including/understanding each subdirectorate,

- the judicial enquiries into gendarme misconduct. - the control and the administrative council of the formations of the gendarmerie as well as the economic analysis of the management led by these same formations. - measurements of prevention and control relating to hygiene, the safety and the working conditions.

The Directorate-General takes part in the correct operation of the organisation. It works: - for the units of the ground and with their profit (at the regional level, the areas and the legions are the essential interfaces so that the decisions taken in Paris correspond well to the needs felt on the ground) ; - as a body of decision-making aid political for all that concerns the gendarmerie in police headquarters (budget, employment...).

It maintains gendarmerie stations throughout the rural parts of the territory. In addition, it has specialised units:

In addition, the Gendarmerie has an institute (Institut de recherche criminelle de la gendarmerie nationale) specializing in the investigation of crimes by scientific and technological means.

Note that the research units may be called into action by the judiciary even within cities. As an example, the Paris research section of the Gendarmerie was in charge of the investigations into the vote-rigging allegations in the 5th district of Paris (see corruption scandals in the Paris region).

Gendarmes normally operate in uniform. They may operate in plainclothes only for specific missions and with their supervisors' authorisation. 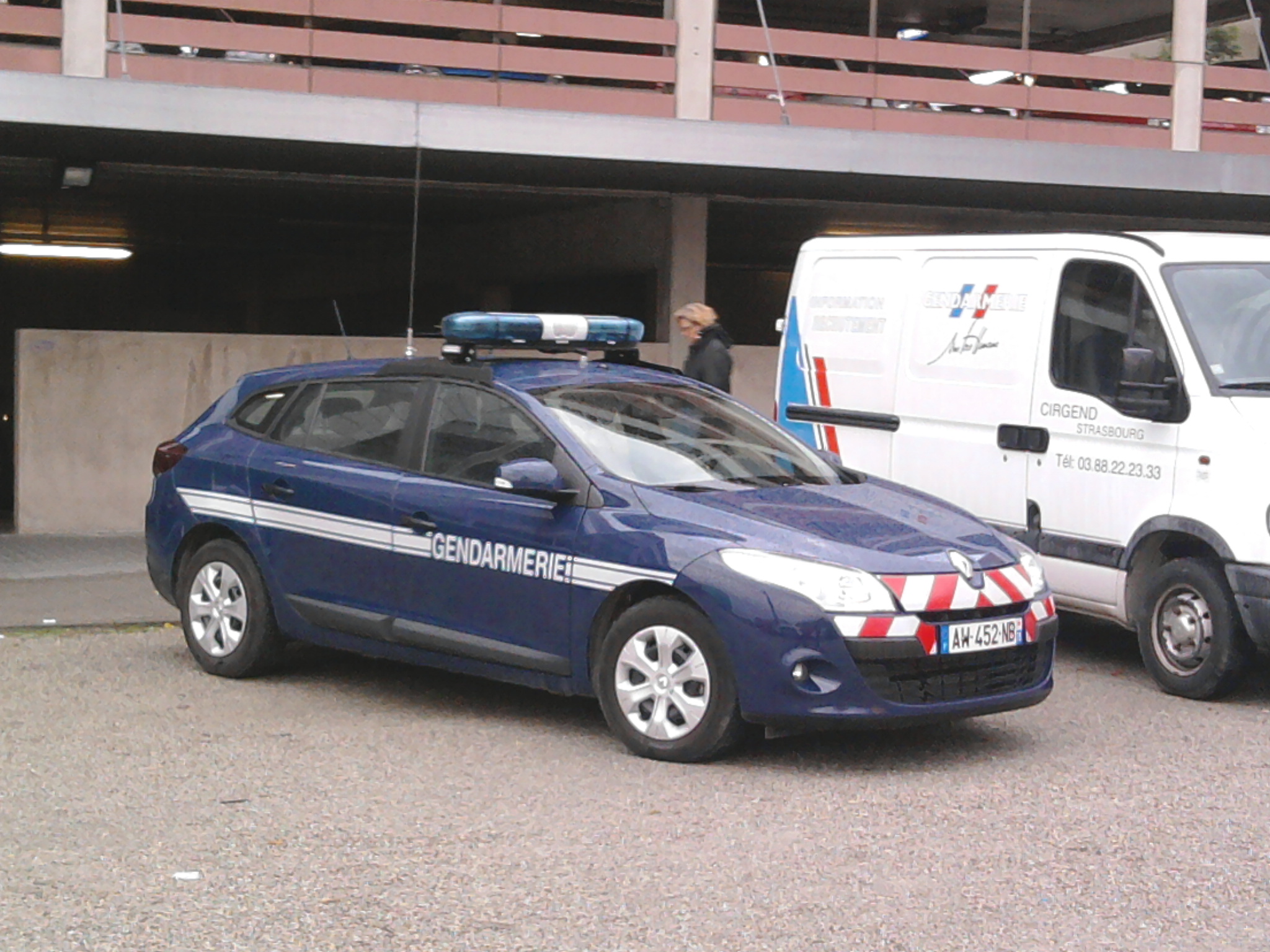 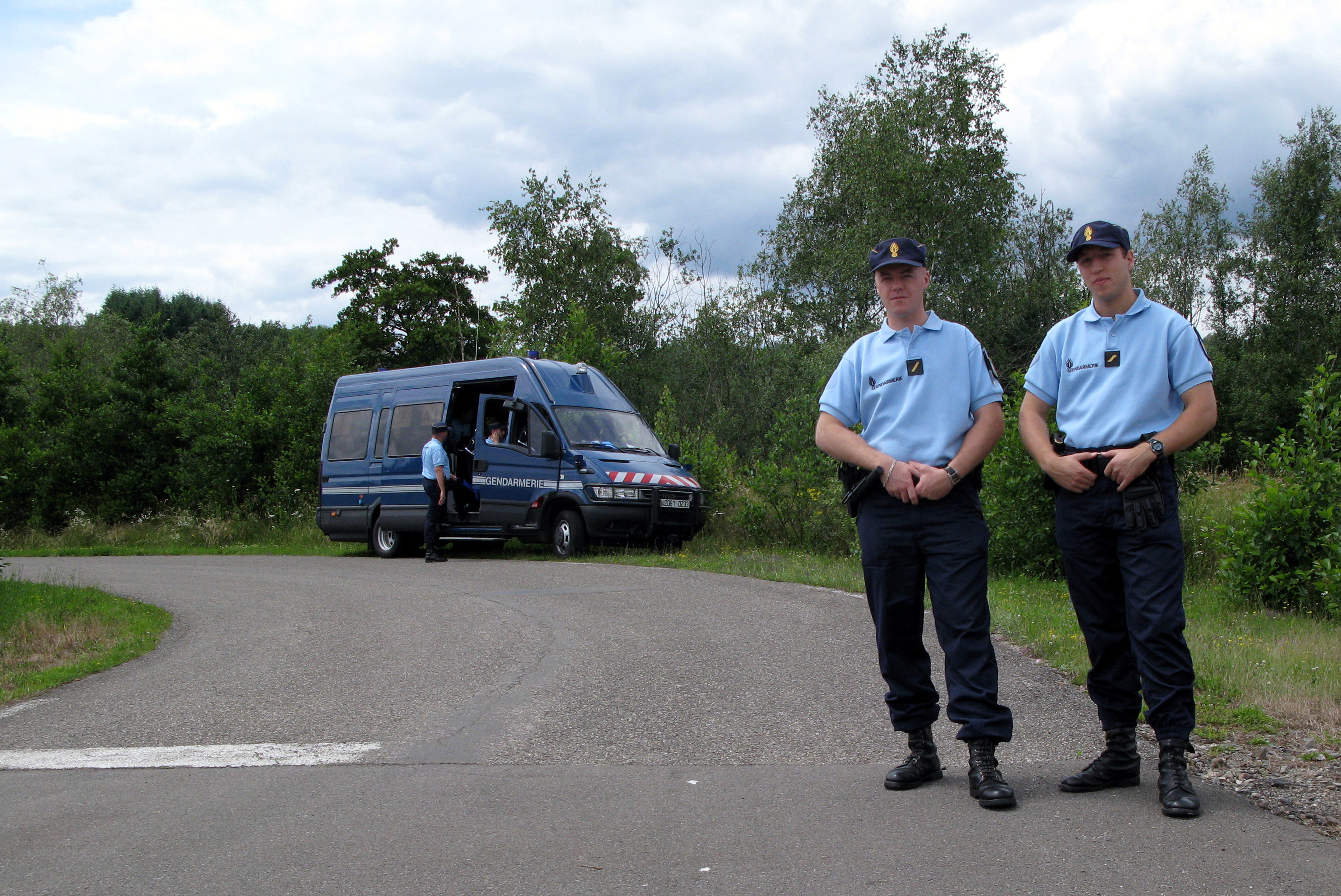 Gendarmes in a relaxed uniform, with soft hats 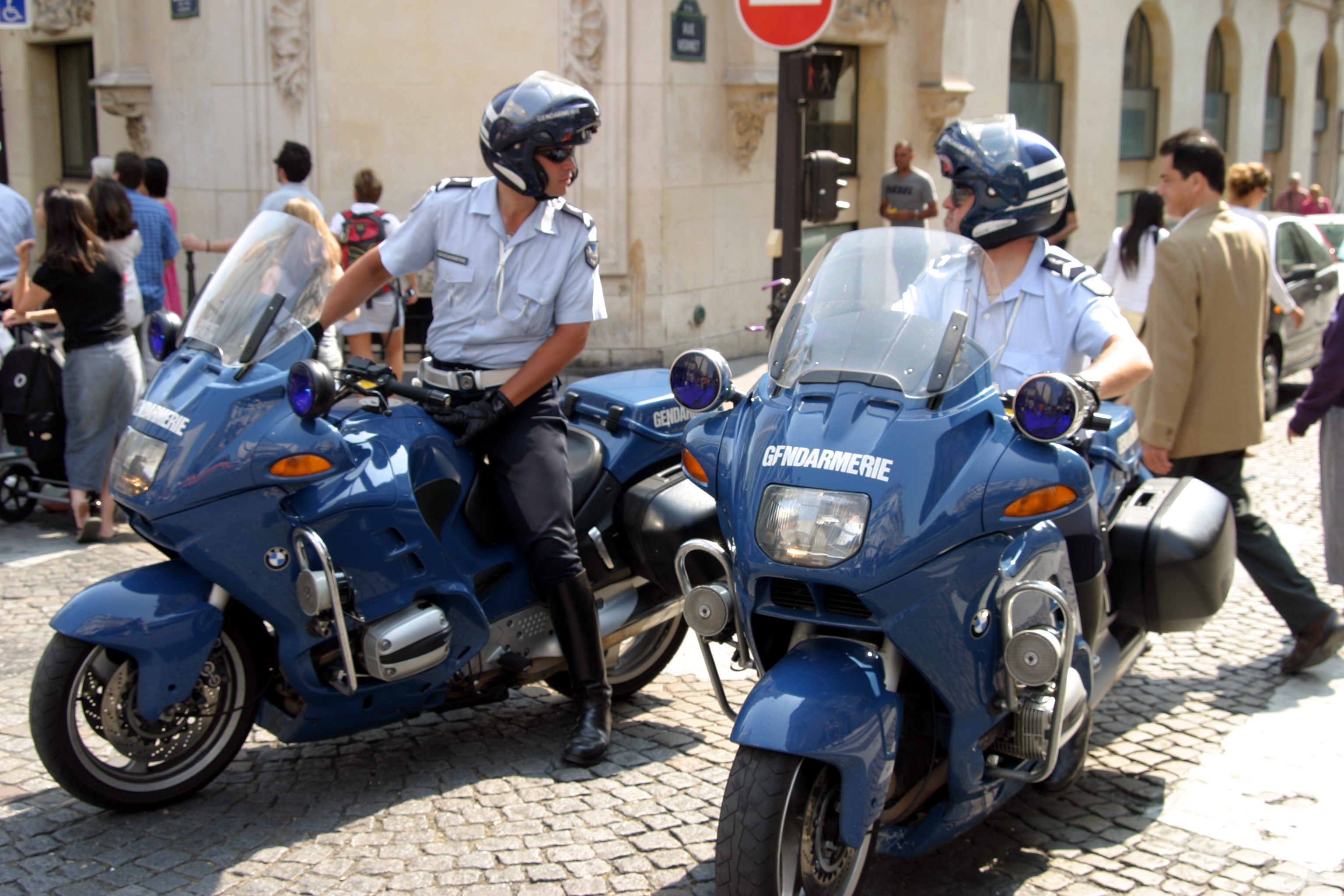 Gendarmerie's motorcycles
Add a photo to this gallery

The Mobile Gendarmerie, or Gendarmerie Mobile, also named « La Jaune » (The Yellow), is currently divided into 7 defensive zones (Zone de Défense). These include the FGMI (La Force de Gendarmerie Mobile et d'Iintervention) located around Paris and six other zones (South-West, West, South-East, East, South and North) located throughout the rest of France. As a whole this is composed of 123 squadrons for a total of 17000 men and women.[6][7]

Its main responsibilities are

Such units may intervene abroad in varied cases such as a hostage crisis or the support of peacekeeping operations.

The civilian tasks of the gendarmes mobiles are similar to those of the police units known as Compagnies Républicaines de Sécurité (CRS), for which they are often mistaken. Easy ways to distinguish them include:

It has the following specialised units:

The Republican Guard is a ceremonial unit based in Paris. Their missions include:[10]

Placed under the dual supervision of the Gendarmerie and the Navy, its missions include:[10]

The Air Transport Gendarmerie (Gendarmerie des Transports Aériens) is placed under the dual supervision of the Gendarmerie and the direction of civilian aviation of the transportation ministry, its missions include:[10]

The Air Gendarmerie (Gendarmerie de l'Air) is placed under the dual supervision of the Gendarmerie and the Air Force, it fulfills police and security missions in the air bases, and goes on the site of an accident involving military aircraft.[10]

The Provost Gendarmerie (Gendarmerie prévôtale), created in 2013, is the military police of the French Army deployments outside of French territory.

The non-metropolitan branches include units serving in the French overseas départements and territories (such as the Gendarmerie of Saint-Pierre and Miquelon), staff at the disposal of independent States for technical co-operation, Germany, security guards in French embassies and consulates abroad.

They have also served in:

These lowest ranks are rare since the suspension of conscription.

This personnel mans the following units:

The Gendarmerie nationale's Prospective Centre (CPGN), which was created in 1998 by an ordinance of the Minister for Defence, is one of the gendarmerie's answers to officials' willingness to the modernise the State. Under the direct authority of the general director of the gendarmerie, it is located in Penthièvre barracks on avenue Delcassé in Paris and managed by Mr Frédéric LENICA, (assisted by a general secretary, Colonel LAPPRAND) "maître des requêtes" in the Conseil d'Etat.[13]

Retrieved from "https://military.wikia.org/wiki/National_Gendarmerie?oldid=4474153"
Community content is available under CC-BY-SA unless otherwise noted.