The first Nazi concentration camps were hastily erected in Germany in February 1933 immediately after Hitler became Chancellor and his NSDAP was given control over the police through Reich Interior Minister Wilhelm Frick and Prussian Acting Interior Minister Hermann Göring.[1] Used to hold and torture political opponents and union organizers, the camps held around 45,000 prisoners by 1933 and were greatly expanded after the Reichstag fire of that year.[2]

Only about 3,000 inmates remained in the camps when in 1934–35 Heinrich Himmler's SS took full control of the police and concentration camps throughout Germany. It was then that Hitler allowed Himmler to start using the camps' facilities and personnel to purge German society of so-called "racially undesirable elements" such as Jews, criminals, homosexuals, and Romani people.[2]

Between 1939 and 1942 during World War II, the number of camps exploded to more than 300,[3] as political prisoners and "undesirable elements" from across Europe were mass-incarcerated[4] generally without judicial process.

The concentration camps were administered since 1934 by Concentration Camps Inspectorate which in 1942 was merged into SS-Wirtschafts-Verwaltungshauptamt and were guarded by SS-Totenkopfverbände.

Holocaust scholars draw a distinction between concentration camps (described in this article) and extermination camps, which were established by the Nazis for the industrial-scale mass murder of the predominantly Jewish ghetto and concentration camp populations.

Use of the word "concentration" came from the idea of using documents confining to one place a group of people who are in some way undesirable. The term itself originated in the "reconcentration camps" set up in Cuba by General Valeriano Weyler in 1897. Concentration camps had in the past been used by the U.S. against Native Americans and by the British in the Second Boer War. Between 1904 and 1908, the Imperial German Army operated both concentration camps and the Shark Island Extermination Camp in German South-West Africa (now Namibia) as part of their genocide of the Herero and Namaqua peoples.

When the Nazis came to power in Germany, they quickly moved to ruthlessly suppress all real or potential opposition. The general public was intimidated through arbitrary psychological terror of the special courts (Sondergerichte).[5] Especially during the first years of their existence these courts "had a strong deterrent effect" against any form of political protest.[6]

The first camp in Germany, Dachau, was founded in March 1933.[7] The press announcement said that "the first concentration camp is to be opened in Dachau with an accommodation for 5,000 persons. All Communists and – where necessary – Reichsbanner and Social Democratic functionaries who endanger state security are to be concentrated there, as in the long run it is not possible to keep individual functionaries in the state prisons without overburdening these prisons."[7] Dachau was the first regular concentration camp established by the German coalition government of National Socialist Workers' Party (Nazi Party) and the Nationalist People's Party (dissolved on 6 July 1933). Heinrich Himmler, then Chief of Police of Munich, officially described the camp as "the first concentration camp for political prisoners."[7]

Dachau served as a prototype and model for the other Nazi concentration camps. Almost every community in Germany had members taken there. The newspapers continuously reported of "the removal of the enemies of the Reich to concentration camps" making the general population more aware of their presence. There were jingles warning as early as 1935: "Dear God, make me dumb, that I may not to Dachau come."[8]

Between 1933 and the fall of Nazi Germany in 1945, more than 3.5 million Germans were forced to spend time in concentration camps and prisons for political reasons,[9][10][11] and approximately 77,000 Germans were executed for one or another form of resistance by Special Courts, courts-martial, and the civil justice system. Many of these Germans had served in government, the military, or in civil positions, which enabled them to engage in subversion and conspiracy against the Nazis.[12]

As a result of the Holocaust, the term "concentration camp" carries many of the connotations of "extermination camp" and is sometimes used synonymously. Because of these ominous connotations, the term "concentration camp", originally itself a euphemism, has been replaced by newer terms such as internment camp, resettlement camp, detention facility, etc., regardless of the actual circumstances of the camp, which can vary a great deal.

After September 1939, with the beginning of the Second World War, concentration camps became places where millions of ordinary people were enslaved as part of the war effort, often starved, tortured and killed.[13] During the War, new Nazi concentration camps for "undesirables" spread throughout the continent. According to statistics by the German Ministry of Justice, about 1,200 camps and subcamps were run in countries occupied by Nazi Germany,[14] while the Jewish Virtual Library estimates that the number of Nazi camps was closer to 15,000 in all of occupied Europe[15] and that many of these camps were created for a limited time before being demolished.[15] Camps were being created near the centers of dense populations, often focusing on areas with large communities of Jews, Polish intelligentsia, Communists or Romani. Since millions of Jews lived in pre-war Poland, most camps were located in the area of General Government in occupied Poland, for logistical reasons. The location also allowed the Nazis to quickly remove the German Jews from within Germany proper. In 1942, the SS built a network of extermination camps to systematically kill millions of prisoners by gassing. The extermination camps (Vernichtungslager) and death camps (Todeslager) were camps whose primary function was genocide. The Nazis themselves distinguished between concentration camps and the extermination camps.[16][17] The British intelligence service had information about the concentration camps, and in 1942 Jan Karski delivered a thorough eyewitness account to the government.

The two largest groups containing prisoners in the camps, both numbering in the millions, were the Polish Jews and the Soviet prisoners of war (POWs) held without trial or judicial process. There were also large numbers of Roma (or Gypsies), ethnic Poles, political prisoners, homosexuals, people with disabilities, Jehovah's Witnesses, Catholic clergy, Eastern European intellectuals and others (including common criminals, as declared by the Nazis). In addition, a small number of Western Allied aviators were sent to concentration camps as spies.[18] Western Allied POWs who were Jews, or whom the Nazis believed to be Jewish, were usually sent to ordinary POW camps; however, a small number were sent to concentration camps under antisemitic policies.[19]

Sometimes the concentration camps were used to hold important prisoners, such as the generals involved in the attempted assassination of Hitler; U-boat Captain-turned-Lutheran pastor Martin Niemöller; and Admiral Wilhelm Canaris, who was interned at Flossenbürg on February 7, 1945, until he was hanged on April 9, shortly before the war’s end.

In most camps, prisoners were forced to wear identifying overalls with colored badges according to their categorization: red triangles for Communists and other political prisoners, green triangles for common criminals, pink for homosexual men, purple for Jehovah's Witnesses, black for Gypsies and asocials, and yellow for Jews.[20]

Many of the prisoners died in the concentration camps through deliberate maltreatment, disease, starvation, and overwork, or were executed as unfit for labor. Prisoners were transported in inhumane conditions by rail freight cars, in which many died before reaching their destination. The prisoners were confined to the boxcars for days or even weeks, with little or no food or water. Many died of dehydration in the intense heat of summer or froze to death in winter. Concentration camps also existed in Germany itself, and while they were not specifically designed for systematic extermination, many of their inmates perished because of harsh conditions or were executed.

In the spring of 1941, the SS – along with doctors and officials of the T-4 Euthanasia Program – introduced the Action 14f13 programme meant for extermination of selected concentration camp prisoners.[21] The Inspectorate of the Concentration Camps categorized all files dealing with the death of prisoners as 14f, and those of prisoners sent to the T-4 gas chambers as 14f13. Under the language regulations of the SS, selected prisoners were designated for "special treatment (German language: Sonderbehandlung) 14f13". Prisoners were officially selected based on their medical condition; namely, those permanently unfit for labor due to illness. Unofficially, racial and eugenic criteria were used: Jews, the handicapped, and those with criminal or antisocial records were selected.[22]:p.144 For Jewish prisoners there was not even the pretense of a medical examination: the arrest record was listed as a physician’s “diagnosis”.[22]:pp.147–148 In early 1943, as the need for labor increased and the gas chambers at Auschwitz became operational, Heinrich Himmler ordered the end of Action 14f13.[22]:p.150

After 1942, many small subcamps were set up near factories to provide forced labor. IG Farben established a synthetic rubber plant in 1942 at Monowitz concentration camp (Auschwitz III); other camps were set up next to airplane factories, coal mines and rocket propellant plants. Conditions were brutal and prisoners were often sent to the gas chambers or killed if they did not work quickly enough.

After much consideration, the extermination of the Jewish prisoners (the “Final Solution”) was announced to high-ranking officials at the Wannsee Conference in 1942.[citation needed]

Towards the end of the war, the camps became sites for medical experiments. Eugenics experiments, freezing prisoners to determine how downed pilots were affected by exposure, and experimental and lethal medicines were all tried at various camps. Female prisoners were routinely raped and degraded in the camps.[23]

Starving prisoners in Mauthausen concentration camp liberated on May 5, 1945. 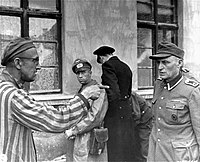 A concentration camp victim identifies an SS guard in June 1945.

The camps were liberated by the Allied and Soviet forces between 1944 and 1945. The first major camp, Majdanek, was discovered by the advancing Soviets on July 23, 1944. Auschwitz was liberated, also by the Soviets, on January 27, 1945; Buchenwald by the Americans on April 11; Bergen-Belsen by the British on April 15; Dachau by the Americans on April 29; Ravensbrück by the Soviets on the same day; Mauthausen by the Americans on May 5; and Theresienstadt by the Soviets on May 8.[24] Treblinka, Sobibor, and Bełżec were never liberated, but were destroyed by the Nazis in 1943. Colonel William W. Quinn of the U.S. 7th Army said of Dachau: "There our troops found sights, sounds, and stenches horrible beyond belief, cruelties so enormous as to be incomprehensible to the normal mind."[25][26]

In most of the camps discovered by the Soviets, almost all the prisoners had already been removed, leaving only a few thousand alive—7,000 inmates were found in Auschwitz, including 180 children who had been experimented on by doctors.[27] Some 60,000 prisoners were discovered at Bergen-Belsen by the British 11th Armoured Division,[28] 13,000 corpses lay unburied, and another 10,000 died from typhus or malnutrition over the following weeks.[29] The British forced the remaining SS guards to gather up the corpses and place them in mass graves.[30]

According to Moshe Lifshitz,[31] the Nazi camps divided as follows:

Though most Nazi concentration and extermination camps were destroyed after the war, some were made into permanent memorials. In Communist Poland, some camps such as Majdanek, Jaworzno, Potulice and Zgoda were used by the Soviet NKVD to hold German prisoners of war, suspected Nazis and collaborators, anti-Communists and other political prisoners, as well as civilian members of the German, Silesian and Ukrainian ethnic minorities. Currently, there are memorials to both camps in Potulice; they have helped to enable a German-Polish discussion on historical perception of World War II. In East Germany (Buchenwald and Sachsenhausen), concentration and extermination camps were used for similar purposes. Dachau concentration camp was used as a prison for arrested Nazis.