No. 90 (Composite) Wing was a Royal Australian Air Force (RAAF) wing that operated during the early years of the Malayan Emergency. Its purpose was to serve as an umbrella organisation for the RAAF units deployed in the conflict, No. 1 (Bomber) Squadron, flying Avro Lincolns, and No. 38 (Transport) Squadron, flying Douglas C-47 Dakotas. The wing was established in July 1950 and headquartered at Changi, on the east coast of Singapore. No. 1 Squadron operated from Tengah, in Singapore's west. No. 38 Squadron was based at Changi and, from April 1951 to February 1952, at Kuala Lumpur in central Malaya. Following No. 38 Squadron's departure in November 1952, No. 90 Wing was disbanded, leaving No. 1 Squadron to carry on as the sole RAAF unit in the campaign until its withdrawal to Australia in July 1958.

In response to the British Government's request for assistance in combating communist insurgents during the Malayan Emergency, Australia determined in April 1950 that it could commit a squadron of eight Douglas C-47 Dakota transports and a flight of four to six Avro Lincoln heavy bombers. Soon afterwards, the Federal Government formally announced its decision to send the Dakotas; on 27 June, it confirmed the commitment of six Lincolns.[1] No. 1 (Bomber) Squadron, operating the Lincolns, would be detached from the control of No. 82 Wing at RAAF Station Amberley, Queensland, and be based at Tengah airfield in the west of Singapore. No. 38 (Transport) Squadron, operating Dakotas, would be detached from No. 86 Wing at RAAF Station Richmond, New South Wales, and be based at Changi, in Singapore's east.[1][2] The transport commitment was made possible by the recent return of ten Australian Dakota crews from service in the Berlin Airlift.[1][3]

Operationally, the RAAF squadrons were to be under the control of RAF Air Headquarters Malaya (later No. 224 Group RAF).[1] However the Chief of the Air Staff, Air Marshal George Jones, was mindful of repeating the experience of World War II, when RAAF units and personnel based in Britain had been absorbed by the Royal Air Force, rather than operating as a national force and being led by high-ranking Australian officers. He therefore decided that Nos. 1 and 38 Squadrons should be formed into a "composite" organisation (i.e. one made up of disparate elements such as bomber, fighter, and reconnaissance units) and administered by an overarching RAAF headquarters.[4][5] No. 90 (Composite) Wing was duly established at Richmond on 10 July 1950, under the command of Group Captain Paddy Heffernan.[1][5] 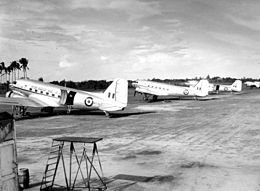 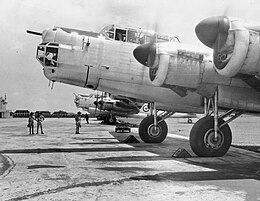 No. 38 Squadron's Dakotas began arriving at Changi on 19 June 1950, and No. 1 Squadron's Lincolns at Tengah on 16 July.[2] No. 90 Wing staff departed Richmond by air and established headquarters at Changi on 22 July.[5][6] The Dakotas had flown their first mission the previous day; the Lincolns undertook their first operations on 26 July.[2] Nos. 1 and 38 Squadrons performed their own routine maintenance, with aircraft rotating back to Australia for major work.[2] The Lincolns generally conducted area bombing missions, as well as strikes against pinpoint targets. Not having to contend with anti-aircraft fire, the Lincolns operated mainly by day. After completing a bomb run, they would make another pass over the target to strafe with machine guns and 20 mm cannon. The Lincolns were considered well suited to the campaign, owing to their range and ability to fly at low speeds to search for targets, as well as their fire power and heavy bomb load. Although the original purpose of the bombing campaign was to kill as many insurgents as possible, the impracticality of achieving this in operations over dense jungle resulted in a shift towards harassing and demoralising the communists, driving them out of their bases and into areas held by ground troops.[7]

The Dakotas were tasked with airlifting cargo, VIPs, troops and casualties, as well as supply drops to friendly forces and aerial despatch of propaganda leaflets.[1] On other missions they acted as pathfinders for No. 1 Squadron, dropping smoke canisters on suspected communist hideouts that the Lincolns following above and behind would attempt to bomb.[8] No. 38 Squadron's operations ranged throughout Malaya and into Borneo, the Philippines, Japan and Korea; transport requirements in the latter areas led to a reduction in No. 90 Wing's strength when four of the Dakotas were transferred to Iwakuni, Japan, in November 1950.[1][2] That month, Group Captain Frank Headlam was appointed to take over command of No. 90 Wing from Heffernan.[9] In April 1951, No. 38 Squadron's four remaining Dakotas relocated to Kuala Lumpur in central Malaya, where they undertook supply drops in concert with No. 41 Squadron RNZAF.[10] Wing Commander R.F.M. Green was appointed the new commanding officer of No. 90 Wing in December 1951, replacing Headlam.[11] On 4 April 1952, Green took part in a Lincoln sortie in place of another pilot, who was injured. The first aircraft he took off had to turn back owing to engine failure. The second completed the mission but had lost brake power when the time came to land; the crew was able to slow the aircraft on the runway by trailing a parachute from the rear turret as they touched down.[12]

No. 38 Squadron relocated to its former base at Changi in February 1952. Having airlifted more than 17,000 passengers and evacuated over 300 injured troops, the squadron departed for Australia on 1 December and rejoined No. 86 Wing at Richmond ten days later.[13] Following this withdrawal, No. 90 Wing was disbanded at Changi, and No. 1 Squadron became the only Australian flying unit in Malaya.[14] It continued the bombing campaign against the communists until it was withdrawn to Australia in July 1958, having flown almost 4,000 sorties in its eight years of operation and dropped over 14,000 tonnes of bombs—85 per cent of the total delivered by Commonwealth forces during the Emergency.[15][16]