The Northrop Grumman (formerly Grumman) EA-6B Prowler is a twin-engine, mid-wing electronic warfare aircraft derived from the basic A-6 Intruder airframe. The EA-6B has been in service with the U.S. Armed Forces from 1971 through the present, during which it has carried out numerous missions for jamming enemy radar systems, and in gathering radio intelligence on those and other enemy air defense systems. In addition, the EA-6B is capable of carrying and firing anti-radiation missiles (ARM), such as the HARM missile. The aircrew of the EA-6B consists of one pilot and three Electronic Countermeasures Officers, though it is not uncommon for only 2 ECMOs to be used on missions.

From the 1998 retirement of the United States Air Force EF-111 Raven electronic warfare aircraft, the EA-6B was the only dedicated electronic warfare plane available for missions by the U.S. Navy, the U.S. Marine Corps, and the U.S. Air Force until the fielding of the Navy's EA-18G Growler in 2009.

The EA-6A "Electric Intruder" was developed for the U.S. Marine Corps during the 1960s to replace its EF-10B Skyknights. The EA-6A was a direct conversion of the standard A-6 Intruder airframe, with two seats, equipped with electronic warfare (EW) equipment. The EA-6A was used by three Marine Corps squadrons during the War in Vietnam. A total of 27 EA-6As were produced, with 15 of these being newly manufactured ones.[2] Most of these EA-6As were retired from service in the 1970s with the last few being retired in the 1980s.[3] The EA-6A was essentially an interim warplane until the more-advanced EA-6B could be designed and built.

The substantially redesigned and more advanced EA-6B was developed beginning in 1966 as a replacement for EKA-3B Skywarriors for the U.S. Navy. The forward fuselage was lengthened to create a rear area for a larger four-seat cockpit, and an antenna fairing was added to the tip of its vertical stabilizer.[2] The Prowler first flew on 25 May 1968, and it entered service on aircraft carriers in July 1971.[4] Three prototype EA-6Bs were converted from A-6As, and five EA-6Bs were developmental airplanes. A total of 170 EA-6B production aircraft were manufactured from 1966 through 1991.[3]

The EA-6B Prowler is powered by two turbojet engines, and it is capable of high subsonic speeds. Due to its extensive electronic warfare operations, and the aircraft's age (produced until 1991), the EA-6B is a high-maintenance aircraft, and it also has undergone more frequent equipment upgrades than any other aircraft in the Navy or Marine Corps.[citation needed] Although designed as an electronic warfare and command-and-control aircraft for air strike missions, the EA-6B is also capable of attacking some surface targets on its own, in particular enemy radar sites and surface-to-air missile launchers. In addition, the EA-6B is capable of gathering electronic signals intelligence.

The EA-6B Prowler has been continually upgraded over the years. The first of which was named "expanded capability" (EXCAP) beginning in 1973. Then came "improved capability" (ICAP) in 1976 and ICAP II in 1980. The ICAP II upgrade provided the EA-6B with the capability of firing Shrike missiles and AGM-88 HARM missiles.[3]

The Advanced Capability EA-6B Prowler (ADVCAP) was a development program initiated to improve the flying qualities of the EA-6B and to upgrade the avionics and electronic warfare systems. The intention was to modify all EA-6Bs into the ADVCAP configuration, however the program was removed from the Fiscal Year 1995 budget due to financial pressure from competing Department of Defense acquisition programs.

The ADVCAP development program was initiated in the late 1980s and was broken into three distinct phases: Full-Scale Development (FSD), Vehicle Enhancement Program (VEP) and the Avionics Improvement Program (AIP).

The added modifications increased the aircraft gross weight approximately 2,000 pound (900 kg) and shifted the center of gravity 3% MAC aft of the baseline EA-6B. In previous models, when operating at sustained high angles of attack, fuel migration would cause additional shifts in CG with the result that the aircraft had slightly negative longitudinal static stability. Results of flight tests of the new configuration showed greatly improved flying qualities and the rearward shift of the CG had minimal impact.

The AIP prototype (bureau number 158547) represented the final ADVCAP configuration, incorporating all of the FSD and VEP modifications plus a completely new avionics suite which added multi-function displays to all crew positions, a head-up display for the pilot, and dual Global Positioning/Inertial navigation systems. The initial joint test phase between the contractor and the US Navy test pilots completed successfully with few deficiencies.

After the program was canceled, the three experimental Prowlers, BuNo 156482, 158542 and 158547, were mothballed until 1999. During the next several years, the three aircraft were dismantled and reassembled creating a single aircraft, b/n 158542, which the Navy dubbed "FrankenProwler". It was returned to active service 23 March 2005.[5]

Northrop Grumman received contracts from the U.S. Navy to deliver new electronic countermeasures gear to Prowler squadrons; the heart of each ICAP III set consists of the ALQ-218 receiver and new software that provides more precise selective-reactive radar jamming and deception and threat location. The ICAP III sets also are equipped with the Multifunction Information Distribution System (MIDS), which includes the Link 16 data link system. Northrop has delivered two lots and will be delivering two more beginning in 2010.[6] The majority of EA-6B Prowlers in service today are the ICAP II version, carrying the ALQ-99 Tactical Jamming System.

Designed for carrier-based and advanced base operations, the EA-6B is a fully integrated electronic warfare system combining long-range, all-weather capabilities with advanced electronic countermeasures.[7] A forward equipment bay and pod-shaped fairing on the vertical fin house the additional avionics equipment. It is now the primary electronic warfare aircraft for the U.S Navy, U.S. Marine Corps, and U.S. Air Force. The primary mission of the EA-6B is to support ground-attack strikes by disrupting enemy electromagnetic activity. As a secondary mission it can also gather tactical electronic intelligence within a combat zone, and another secondary mission is attacking enemy radar sites with anti-radiation missiles.

The Prowler has a crew of four, a pilot and three Electronic Countermeasures Officers (known as ECMOs). Powered by two non-afterburning Pratt & Whitney J52-P-408A turbojet engines, it is capable of speeds of up to 590 miles per hour (950 km/h) with a range of 1,140 miles (1,840 km).

Design particulars include the refueling probe being asymmetrical, appearing bent to the right. It contains an antenna near its root. The canopy has a shading of gold to protect the crew against the radio emissions that the electronic warfare equipment produces.

Since the retirement of the EF-111 Raven in 1995, the EA-6B is the only dedicated aerial radar jammer aircraft of the U.S. Armed Forces. The EA-6B has been flown in almost all American combat operations since 1972, and is frequently flown in support of the U.S. Air Force missions.

About 125 Prowlers remain today, divided between twelve Navy, four Marine, and four joint Navy-Air Force "Expeditionary" squadrons. A Joint Chiefs of Staff (JCS) staff study recommended that the EF-111 Raven be retired to reduce the types of aircraft dedicated to the same mission, which led to an Office of the Secretary of Defense (OSD) program memorandum to establish 4 "expeditionary" Prowler squadrons composed of Navy and USAF personnel to meet the needs of the Air Force.[citation needed]

Though once considered being replaced by Common Support Aircraft, the original plan failed to materialize. The EA-6B remains in active service today. In 2009, the Navy EA-6B Prowler community began transitioning to the EA-18G Growler, a new electronic warfare derivative of the F/A-18F Super Hornet. All but one of the active duty Navy EA-6B squadrons are based at Naval Air Station Whidbey Island, located in the northwest corner of the state of Washington. VAQ-136 is stationed at Naval Air Facility Atsugi, Japan, as part of Carrier Air Wing 5, the forward deployed naval forces (FDNF) air wing that embarks aboard the Japan-based USS George Washington (CVN-73). VAQ-209, the Navy Reserve's sole remaining EA-6B squadron, is stationed at Naval Air Facility Washington, Maryland. All Marine Corps EA-6B squadrons are located at Marine Corps Air Station Cherry Point, North Carolina.

Operations in Afghanistan and Iraq[]

According to news reports, the Prowler has been used in anti-improvised explosive device operations in the current conflict in Afghanistan for several years by jamming remote detonation devices such as garage door openers or cellular telephones.[9] Two Prowler squadrons were also based in Iraq, working with the same mission.[10]

The EA-6B Prowler is operated by the U.S. Armed Forces, and has squadrons in both the U.S. Marine Corps and Navy.

VMAQ squadrons operate the EA-6B Prowler.[11] Each of the four squadrons operates five aircraft and are land-based, although they are capable of operating aboard U.S. Navy aircraft carriers and have done so in the past.[12][13]

The USMC is investigating an electronic attack role for the F-35 Lightning II to replace their Prowlers.[18]

While no Prowler has ever been lost in combat, over forty were destroyed in various accidents as of 2007.[citation needed] 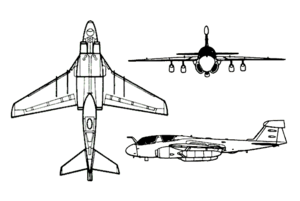