For the church in Paris, see Church Notre-Dame-de-Lorette, Paris.

Notre Dame de Lorette, also known as Ablain St.-Nazaire French Military Cemetery, is the world's largest French military cemetery.[1] It is the name of a ridge, basilica, and French national cemetery northwest of Arras at the village of Ablain-Saint-Nazaire. The high point of the hump-backed ridge stands 165 metres high and - with Vimy Ridge - utterly dominates the otherwise flat Douai plain and the town of Arras.

The ground was strategically important during the First World War and was bitterly contested in a series of long and bloody engagements between the opposing French and German armies. It was the focal point of three battles:

The Battles of Artois were as costly in French lives as the better-known Battle of Verdun. As with numerous other sites across France, Notre Dame de Lorette became a national necropolis, sacred ground containing the graves of French and Colonial fallen, as well as an ossuary, containing the bones of those whose names were not marked.

In total, the cemetery and ossuary hold the remains of more than 40,000 soldiers, as well as the ashes of many concentration camp victims.

The basilica and memorial buildings were designed by the architect Louis-Marie Cordonnier and his son Jacques Cordonnier, and built between 1921 and 1927.

A small building was raised in 1727 by the painter Nicolas Florent Guilbert, who had made a successful pilgrimage to Loreto (Italy), to shelter a statue of the Virgin Mary. It was destroyed in 1794, rebuilt in 1816 and transformed in 1880. 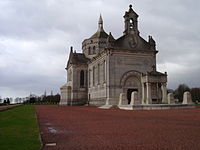 Lorette Cemetery
Add a photo to this gallery

Retrieved from "https://military.wikia.org/wiki/Notre_Dame_de_Lorette?oldid=3391285"
Community content is available under CC-BY-SA unless otherwise noted.