Nuclear weapons tests are experiments carried out to determine the effectiveness, yield, and explosive capability of nuclear weapons. Throughout the 20th century, most nations that developed nuclear weapons tested them. Testing nuclear weapons can yield information about how the weapons work, as well as how the weapons behave under various conditions and how structures behave when subjected to nuclear explosions. Nuclear testing has often been used as an indicator of scientific and military strength, and many tests have been overtly political in their intention; most nuclear weapons states publicly declared their nuclear status by means of a nuclear test.

The first nuclear weapon was detonated as a test by the United States at the Trinity site on July 16, 1945, with a yield approximately equivalent to 20 kilotons. The first hydrogen bomb, codenamed "Mike", was tested at the Enewetak atoll in the Marshall Islands on November 1, 1952 (local date), also by the United States. The largest nuclear weapon ever tested was the "Tsar Bomba" of the Soviet Union at Novaya Zemlya on October 30, 1961, with the largest yield ever seen (as of September 2013), an estimated 50–58 megatons.

In 1963, three (UK, US, Soviet Union) of the four nuclear and many non-nuclear states signed the Limited Test Ban Treaty, pledging to refrain from testing nuclear weapons in the atmosphere, underwater, or in outer space. The treaty permitted underground nuclear testing. France continued atmospheric testing until 1974, and China continued until 1980. Neither has signed the treaty.[1]

Underground tests in the United States continued until 1992 (its last nuclear test), the Soviet Union until 1990, the United Kingdom until 1991, and both China and France until 1996. After signing the Comprehensive Test Ban Treaty in 1996 (which has as of 2012 not yet entered into force), these states have pledged to discontinue all nuclear testing. Non-signatories India and Pakistan last tested nuclear weapons in 1998.

The most recent nuclear test occurred in February 2013 in North Korea. In January 2013, it was announced by North Korea that it plans to conduct further tests involving rockets that can carry satellites as well as nuclear warheads.[2]

Nuclear weapons tests have historically been divided into four categories reflecting the medium or location of the test.

Separately from these designations, nuclear tests are also often categorized by the purpose of the test itself.

Aside from these technical considerations, tests have been conducted for political and training purposes. Tests also often serve multiple purposes.

Hydronuclear tests study nuclear materials under the conditions of explosive shock compression. They can create sub-critical conditions, or supercritical conditions with yields ranging from negligible all the way up to a substantial fraction of full weapon yield.[4]

Sub-critical (or cold) tests are any type of tests involving nuclear materials and possibly high-explosives (like those mentioned above) that purposefully result in no yield. The name refers to the lack of creation of a critical mass of fissile material. They are the only type of tests allowed under the Comprehensive Nuclear-Test-Ban Treaty.[5] Sub-critical tests continue to be performed by the nuclear powers.[6][7]

There have also been simulations of the effects of nuclear detonations using conventional explosives (such as the Minor Scale U.S. test in 1985). The explosives might be spiked with radioactive materials to simulate fallout dispersal.

The first atomic weapons test was conducted near Alamogordo, New Mexico, on July 16, 1945, during the Manhattan Project, and given the codename "Trinity". The test was originally to confirm that the implosion-type nuclear weapon design was feasible, and to give an idea of what the actual size and effects of a nuclear explosion would be before they were used in combat against Japan. While the test gave a good approximation of many of the explosion's effects, it did not give an appreciable understanding of nuclear fallout, which was not well understood by the project scientists until well after the atomic bombings of Hiroshima and Nagasaki.

The United States conducted six atomic tests before the Soviet Union developed their first atomic bomb (RDS-1) and tested it on August 29, 1949. Neither country had very many atomic weapons to spare at first, and so testing was relatively infrequent (when the U.S. used two weapons for Operation Crossroads in 1946, they were detonating over 20% of their current arsenal). However, by the 1950s the United States had established a dedicated test site on its own territory (Nevada Test Site) and was also using a site in the Marshall Islands (Pacific Proving Grounds) for extensive atomic and nuclear testing.

The early tests were used primarily to discern the military effects of atomic weapons (Crossroads had involved the effect of atomic weapons on a navy, and how they functioned underwater) and to test new weapon designs. During the 1950s, these included new hydrogen bomb designs, which were tested in the Pacific, and also new and improved fission weapon designs. The Soviet Union also began testing on a limited scale, primarily in Kazakhstan. During the later phases of the Cold War, though, both countries developed accelerated testing programs, testing many hundreds of bombs over the last half of the 20th century.

Atomic and nuclear tests can involve many hazards. Some of these were illustrated in the U.S. Castle Bravo test in 1954. The weapon design tested was a new form of hydrogen bomb, and the scientists underestimated how vigorously some of the weapon materials would react. As a result, the explosion—with a yield of 15 Mt—was over twice what was predicted. Aside from this problem, the weapon also generated a large amount of radioactive nuclear fallout, more than had been anticipated, and a change in the weather pattern caused the fallout to be spread in a direction which had not been cleared in advance. The fallout plume spread high levels of radiation for over a hundred miles, contaminating a number of populated islands in nearby atoll formations (though they were soon evacuated, many of the islands' inhabitants suffered from radiation burns and later from other effects such as increased cancer rate and birth defects), as did the crew of the Japanese fishing boat Daigo Fukuryū Maru. One crewman died from radiation sickness after returning to port, and it was feared that the radioactive fish they had been carrying had made it into the Japanese food supply.

Bravo was the worst U.S. nuclear accident, but many of its component problems—unpredictably large yields, changing weather patterns, unexpected fallout contamination of populations and the food supply—occurred during other atmospheric nuclear weapons tests by other countries as well. Concerns over worldwide fallout rates eventually led to the Partial Test Ban Treaty in 1963, which limited signatories to underground testing. Not all countries stopped atmospheric testing, but because the United States and the Soviet Union were responsible for roughly 86% of all nuclear tests their compliance cut the overall level substantially. France continued atmospheric testing until 1974, and China until 1980.

Almost all new nuclear powers have announced their possession of nuclear weapons with a nuclear test. The only acknowledged nuclear power which claims never to have conducted a test was South Africa (see Vela Incident), which has since dismantled all of its weapons. Israel is widely thought to possess a sizable nuclear arsenal, though it has never tested, unless they were involved in Vela. Experts disagree on whether states can have reliable nuclear arsenals—especially ones using advanced warhead designs, such as hydrogen bombs and miniaturized weapons—without testing, though all agree that it is very unlikely to develop significant nuclear innovations without testing. One other approach is to use supercomputers to conduct "virtual" testing, but codes need to be validated against test data.

There have been many attempts to limit the number and size of nuclear tests; the most far-reaching is the Comprehensive Test Ban Treaty of 1996, which has not yet been ratified by the United States. Nuclear testing has since become a controversial issue in the United States, with a number of politicians saying that future testing might be necessary to maintain the aging warheads from the Cold War. Because nuclear testing is seen as furthering nuclear arms development, many are also opposed to future testing as an acceleration of the arms race. 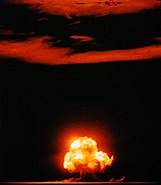 The Sedan test of 1962 was an experiment by the United States in using nuclear weapons to excavate large amounts of earth.

The nuclear powers have conducted more than 2,000 nuclear test explosions (numbers are approximated, as some test results have been disputed):

From the first nuclear test in 1945 until tests by Pakistan in 1998, there was never a period of more than 22 months with no nuclear testing. June 1998 to October 2006 was the longest period since 1945 with no acknowledged nuclear tests. 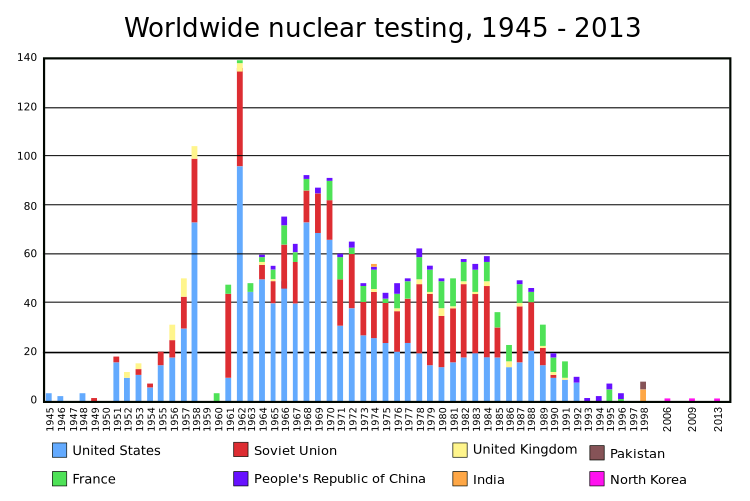 There are many proposed anti-nuclear explosion treaties, such as the Partial Nuclear Test Ban Treaty, and the Comprehensive Nuclear Test Ban Treaty. Most of these treaties were passed because scientists in many different countries noticed spikes in radiation levels in civilian areas. Human nuclear testing also contributed to the formation of the treaties, and examples can be seen in the following articles:

The Partial Nuclear Test Ban treaty makes it illegal to detonate any nuclear explosion anywhere except underground, in order to reduce atmospheric fallout. Most countries have signed and ratified the Partial Nuclear Test Ban which went into effect in October 1963. Of the nuclear states, France, China, and North Korea have never signed the Partial Nuclear Test Ban Treaty.[16] The 1996 Comprehensive Nuclear-Test-Ban Treaty (CTBT) bans all nuclear explosions everywhere, including underground. For that purpose, the Preparatory Commission of the Comprehensive Nuclear-Test-Ban Treaty Organization is building an international monitoring system with 337 facilities located all over the globe. 85% of these facilities are already operational.[17] As of May 2012, the CTBT has been signed by 183 States, of which 157 have also ratified. However, for the Treaty to enter into force it needs to be ratified by 44 specific nuclear technology-holder countries. These "Annex 2 States" participated in the negotiations on the CTBT between 1994 and 1996 and possessed nuclear power or research reactors at that time. The ratification of eight Annex 2 states is still missing: China, Egypt, Iran, Israel and the United States have signed but not ratified the Treaty; India, North Korea and Pakistan have not signed it.[18]

Over 500 atmospheric nuclear weapons tests were conducted at various sites around the world from 1945 to 1980. As public awareness and concern mounted over the possible health hazards associated with exposure to the nuclear fallout, various studies were done to assess the extent of the hazard. A Centers for Disease Control and Prevention/ National Cancer Institute study claims that nuclear fallout might have led to approximately 11,000 excess deaths, most caused by thyroid cancer linked to exposure to iodine-131.[19]

The following list is of milestone nuclear explosions. In addition to the atomic bombings of Hiroshima and Nagasaki, the first nuclear test of a given weapon type for a country is included, and tests which were otherwise notable (such as the largest test ever). All yields (explosive power) are given in their estimated energy equivalents in kilotons of TNT (see TNT equivalent). Putative tests (like Vela Incident) have not been included.

"Staging" refers to whether it was a "true" hydrogen bomb of the so-called Teller-Ulam configuration or simply a form of a boosted fission weapon. For a more complete list of nuclear test series, see List of nuclear tests. Some exact yield estimates, such as that of the Tsar Bomba and the tests by India and Pakistan in 1998, are somewhat contested among specialists.