The Order of Lenin (Russian: Орден Ленина, Orden Lenina), named after the leader of the Russian October Revolution, was the highest decoration bestowed by the Soviet Union. The order was awarded to:

From 1944 to 1957, before the institution of specific length of service medals, the Order of Lenin was also used to reward 25 years of conspicuous military service.

Those who were awarded the titles "Hero of the Soviet Union" and "Hero of Socialist Labour" were also given the order as part of the award. It was also bestowed on cities, companies, factories, regions, military units and ships. Corporate entities, factories, various educational institutions and military units who received the said Order applied the full name of the order into their official titles.

The order was established by the Central Executive Committee on April 6, 1930.

The first design of the Order of Lenin was sculpted by Pyotr Tayozhny and Ivan Shadr based on sketches by Ivan Dubasov. It was made by Goznak of silver with some lightly gold-plated features. It was a round badge with a central disc featuring Vladimir Lenin's profile surrounded by smokestacks, a tractor and a building, possibly a power plant. A thin red-enamelled border and a circle of wheat panicles surrounded the disc. At the top was a gold-plated "hammer and sickle" emblem, and at the bottom were the Russian initials for "USSR" (Russian: СССР) in red enamel. Only about 800 of this design were minted. It was awarded between 1930-1932.[1]

The second, design was awarded in 1934 till 1936. This was a solid gold badge, featuring an enamelled disc bearing Lenin's portrait . The disc is surrounded by two golden panicles of wheat, and a red flag with "LENIN" in Cyrillic script (Russian: ЛЕНИН). A red star is placed on the left and the "hammer and sickle" emblem at the bottom, both in red enamel.

The fourth design was awarded from 1943 till the end of the USSR.

The badge was originally worn by screwback on the left chest without ribbon. Later it was worn as a medal suspended from a red ribbon with pairs of yellow stripes at the edges (see image above). The ribbon bar is of the same design. The portrait of Lenin was originally a riveted silver piece. For a time it was incorporated into a one-piece gold badge, but finally returned as a separate platinum piece until the dissolution of the USSR in 1991. 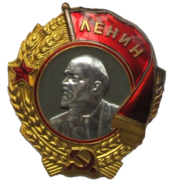 Order of Lenin type 4
Add a photo to this gallery

The first Order of Lenin was awarded to the newspaper Komsomolskaya Pravda on 23 May 1930. Also among the first ten recipients were five industrial companies, three pilots, and the Secretary to the Central Executive Committee Avel Enukidze. The first person to be awarded a second Order of Lenin was the pilot Valery Chkalov in 1936. Another pilot, Vladimir Kokkinaki, became the first to receive a third Order in 1939.

The first five foreign recipients, a German and four Americans (one of the Americans was Frank Bruno Honey[2]—on May 17, 1932), received the award for helping in the reconstruction of Soviet industry and agriculture in 1931–1934.[3]

The record for most Orders of Lenin received by a single person is held by Nikolay Patolichev, longtime Minister for Foreign Trade of the USSR, who was awarded 12 times. Other numerous repeat awardees are:

In IPC publication's Battle Picture Weekly one character 'Johnny Red' is awarded the order of Lenin for Saving the life of a political Commissar from a German Air Ace.

In the movie Indiana Jones and the Kingdom of the Crystal Skull, Indy's nemesis Col. Irina Spalko was awarded three times with the Order of Lenin. She was also awarded the Hero of Socialist Labor for her research into psychic warfare.

Retrieved from "https://military.wikia.org/wiki/Order_of_Lenin?oldid=5451322"
Community content is available under CC-BY-SA unless otherwise noted.