Order of Merit of the Federal Republic of Germany

The Order of Merit of the Federal Republic of Germany (Verdienstorden der Bundesrepublik Deutschland) is the only federal decoration of Germany. It was created by the first President of the Federal Republic of Germany, Theodor Heuss, on 7 September 1951, and has been awarded to over 200,000 individuals in total, both Germans and foreigners. Since the 1990s the number of annual awards has declined from over 4,000, first to around 2,300-2,500 per year, and now under 2,000, with a low of 1752 in 2011. In recent years women have made up a steady 30-31% of recipients.[1] Colloquially, the decorations of the different classes of the Order are also known as Federal Cross of Merit (German language: Bundesverdienstkreuz).

Most of the German federal states (Länder) have each their own order of merit as well, with the exception of the Free and Hanseatic Cities of Bremen and Hamburg, which reject any orders (by old tradition their citizens, particularly former or present senators, will refuse any decoration in the form of an order. Most famous example: former Chancellor Helmut Schmidt).

The order was established on 7 September 1951 by the decree of the then Federal President Theodor Heuss. The decree, which was co-signed by the President Heuss together with Chancellor Konrad Adenauer and the Minister of the Interior, Robert Lehr, signed, states:

The Order comprises four groups with in total eight classes:[2]

The President of the Federal Republic holds the Grand Cross special class ex officio. It is awarded to him in a ceremony by the President of the Bundestag, attended by the Chancellor of Germany, the President of the Bundesrat, and the Supreme Court President. Other than the German president, only a foreign head of state can be awarded with this highest class. There is also the provision of awarding the Grand Cross 1st Class in a special rare design, in which the central medallion with the black eagle is surrounded by a stylized laurel wreath in relief. This Grand Cross special design has been awarded so far only twice, to former German chancellors Konrad Adenauer and Helmut Kohl.[4]

Except for the lowest class, the badge is the same for all classes, but with slightly different versions for men and women (slightly smaller badge and ribbon for women):

The badge is a golden Cross enamelled in red, with a central disc bearing a black eagle.

The star is a golden star with straight rays, its size and points vary according to class, with the badge superimposed upon it.

The ribbon is red with gold-black-gold stripes.

Star of the Grand Officer's Cross 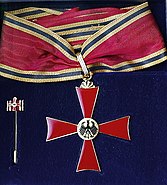 Main article: List of recipients of the Order of Merit of the Federal Republic of Germany