Ottoman Syria refers to divisions of the Ottoman Empire within the Levant, usually defined as the region east of the Mediterranean Sea, west of the Euphrates River, north of the Arabian Desert and south of the Taurus Mountains.[1]

Ottoman Syria became organized by the Ottomans upon conquest from the Mamluks in the early 16th century into Eyalets (provinces) of Damascus and Aleppo. Elayet of Tripoli was formed in 1579 and later Eyalet of Adana was split from Aleppo. In 1660, Eyalet of Safed was established and shortly renamed into Eyalet of Sidon. The Eyalets were later transformed into the Vilayet of Syria, the Vilayet of Aleppo and the Vilayet of Beirut, following the 1864 Tanzimat reforms.

Before 1516, Syria was part of the Mamluk Empire centered in Egypt. The Ottoman Sultan Selim I conquered Syria in 1516 after defeating the Mamlukes at the Battle of Marj Dabiq near Aleppo in northern Syria. Selim carried on his victorious campaign against the Mamlukes and conquered Egypt in 1517 following the Battle of Ridanieh, bringing an end to the Mamluk Sultanate.

When he first seized Syria in 1516, Selim I kept the administrative subdivisions of the Mamluk period unchanged. After he came back from Egypt in July 1517, he reorganized Syria into one large province or eyalet named Şam (Arabic/Turkish for "Syria"). The eyalet was subdivided into several districts or sanjaks.

In 1549, Syria was reorganized into two eyalets. The northern Sanjak of Aleppo became the center of the new Eyalet of Aleppo. At this time, the two Syrian Eyalets were subdivided as follows:

In 1579, the Eyalet of Tripoli was established under the name of Tripoli of Syria (Turkish:Trablusşam) (Arabic: طرابلس الشام). At this time, the eyalets became as follows:

The Eyalet of Aleppo included the Sanjaks of Aleppo, Adana, Marash, Aintab, and Urfa.

The Eyalet of Tripoli included the Sanjaks of Tripoli, Latakia, Hama and Homs.

In 1833, the Syrian provinces were ceded to Muhammed Ali of Egypt in the Convention of Kutahya. The firman stated that "The governments of Candia and Egypt are continued to Mahomet Ali. And in reference to his special claim, I have granted him the provinces of Damascus, Tripoli-in-Syria, Sidon, Saphet, Aleppo, the districts of Jerusalem and Nablous, with the conduct of pilgrims and the commandment of the Tcherde (the yearly offering to the tomb of the Prophet). His son, Ibrahim Pacha, has again the title of Sheikh and Harem of Mekka, and the district of Jedda; and farther, I have acquiesced in his request to have the district of Adana ruled by the Treasury of Taurus, with the title of Mohassil." [2]

Following the massacre of thousands of Christian civilians during the 1860 Lebanon conflict, and under a growing European pressure, mainly from France, an Ottoman edict issued in 1861 transformed "Al Kaimaqumyateen," the former regime based on religious rule that led to civil war, into the Mutesarrifiyyet governed by a Mutasarrıf who according to law had to be a non-Lebanese Christian .

As part of the Tanzimat reforms, an Ottoman law passed in 1864 provided for a standard provincial administration throughout the empire with the Eyalets becoming smaller Vilayets governed by a Wali or governor still appointed by the Porte but with new provincial assemblies participating in administration.

In 1874 Jerusalem and the surrounding towns became the Mutasarrifate of Jerusalem, gaining a special administrative status.

In 1877, the subdivisions of Syria were 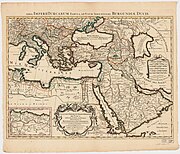 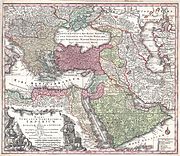 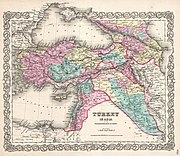