The Panzerwerfer 42 auf Maultier weighed 7.1 tonnes, was six meters long, two meters wide, and nearly three meters high. It was capable of reaching speeds of up to 40 km/h. One of these half tracked vehicles generally carried a Nebelwerfer 42 launching system, which was specially designed to be mounted on the Opel-engine powered Panzerwerfer. The German engineers designed this system because of the conspicuous trails of smoke left behind by the Nebelwerfer batteries, which necessitated a self-propelled artillery piece. The system contained 10 missile tubes, and generally carried 20 projectiles, enough for the vehicle to fire two full salvos.

Though intended to provide fire support and operate well behind the point of contact, some Panzerwerfers also had a machine gun mounted above the cab for protection against infantry attack.

Known as the "Moaning Minnie" by Allied soldiers for the distinctive noise the rockets made when fired, it was less accurate than a dedicated artillery piece, but its ability to saturate an area with fire and strike terror into enemy infantry made it valuable. It saw widespread use during the war. 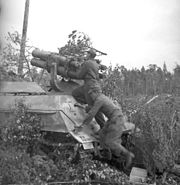