The Pentagon Memorial, located just southwest of The Pentagon in Arlington County, Virginia, is a permanent outdoor memorial to the 184 men and women who died as victims in the building and on American Airlines Flight 77 during the September 11, 2001 attacks.[1]

Designed by Julie Beckman and Keith Kaseman of the architectural firm of Kaseman Beckman Advanced Strategies[2] with engineers Buro Happold,[3] the memorial opened to the public on September 11, 2008.

In the aftermath of the 9/11 attacks, an impromptu memorial was set up on a hill at the Navy Annex, overlooking the Pentagon. People came to pay respects and place tributes.[4] One month after the attacks, 25,000 people attended a memorial service at the Pentagon for employees and family members; speakers included President George W. Bush and Secretary of Defense Donald Rumsfeld.[5] Bush remarked, "The wound to this building will not be forgotten, but it will be repaired. Brick by brick, we will quickly rebuild the Pentagon."[6] The American flag that hung on the Pentagon, near the damaged section, was lowered during the service.[7]

Victims of Terrorist Attack on the Pentagon Memorial[edit | edit source]

On September 12, 2002, the day after the first anniversary of the attacks, Defense Secretary Donald Rumsfeld and General Richard Myers, chairman of the Joint Chiefs of Staff, dedicated the Victims of Terrorist Attack on the Pentagon Memorial at Arlington National Cemetery.[8] A pentagonal[9] granite marker 4.5 feet (1.4 m) high,[10] the memorial honors the five people for whom no identifiable remains were found.[10] A portion of the remains of 25 other victims are buried at the site.[11] Around the top is inscribed "Victims of Terrorist Attack on the Pentagon September 11, 2001". Aluminum plaques, painted black, are inscribed with the names of the 184 victims.[10]

Opened in September 2002 after Pentagon repairs were completed, the America's Heroes Memorial and chapel are located where American Airlines Flight 77 crashed into the building.

The memorial includes a book of photographs and biographies of the victims. It also includes five large black acrylic panels: one displays the Purple Heart medal awarded to military members killed in the attacks, another shows the medal given to civilians, two back wall panels are etched with the victims' names, and a center panel shows tribute statements. The small chapel, located in an adjacent room, has stained glass windows with patriotic-themed designs.

The Pentagon Memorial was constructed from a design by Beckman and Kaseman of Philadelphia, Pennsylvania, with design support from Buro Happold, that was chosen following a design competition. To honor the 184 victims, 184 illuminated benches have been arranged according to the victim's ages, starting with Dana Falkenberg, 3, to John Yamnicky Sr., 71, in a landscaped 1.93-acre (7,800 m2) plot. Each bench is engraved with the name of a victim. The benches representing the victims that were inside the Pentagon are arranged so those reading the names will face the Pentagon's south facade, where the plane hit; benches dedicated to victims aboard the plane are arranged so that those reading the engraved name will be facing skyward along the path the plane traveled.[12] If more than one member of a family died during the attack, family names are listed in the reflecting pool under the bench, in addition to the separate benches that have been created for each individual.[13] A wall along the edge of the Memorial begins at a height of 3 inches and rises to a height of 71 inches, the ages of the youngest and oldest victim of the attack,[14] and approximately 85 paperbark maple trees are planted on the memorial grounds.[15]

Construction began on June 15, 2006.[19] By November 2006, site excavation, re-routing of existing utility lines had been completed, and water lines laid for the fountain pools.[20] By May 2007, the foundation of the perimeter wall was built and concrete pilings poured for each bench.[16]

The Memorial was dedicated and opened to the public on September 11, 2008.[21] President George W. Bush called the memorial "an everlasting tribute to the 184 souls who perished." Over 20,000 people attended the dedication ceremony, including past Secretary of Defense Donald Rumsfeld, Chairman of the Joint Chiefs of Staff Michael Mullen, and Secretary of Defense Robert M. Gates.[22] It was opened to the public at 7 p.m. in a separate ceremony with a music performance by the Navy Band and the Sea Chanters Chorus. SFC Peter George Lentz unveiled the first bench in dedication to the 184 lives lost in their memory.

The Memorial is open seven days a week, year-round.[citation needed]

The National Park Service anticipated the memorial would attract more than 2 million visitors per year.[citation needed] As of August 2011, the memorial had received an annual average of 225,000 to 250,000 visitors.[23]

To commemorate the anniversary each year, an American flag is hung on the section of the Pentagon hit by Flight 77. At night, this section of the building is lit up in blue lights. For the fifth anniversary, a "Tribute of Lights" display included 184 beams of light from the center courtyard shining into the sky.

Anniversary events also include the America Supports You National Freedom Walk, which has been held on Sundays. The walk starts at the Lincoln Memorial and ends at the Pentagon.[24] The Arlington Police/Fire/Sheriff 5K Race is held on Saturdays, around the anniversary, with the course going through part of Crystal City and through the Pentagon grounds. 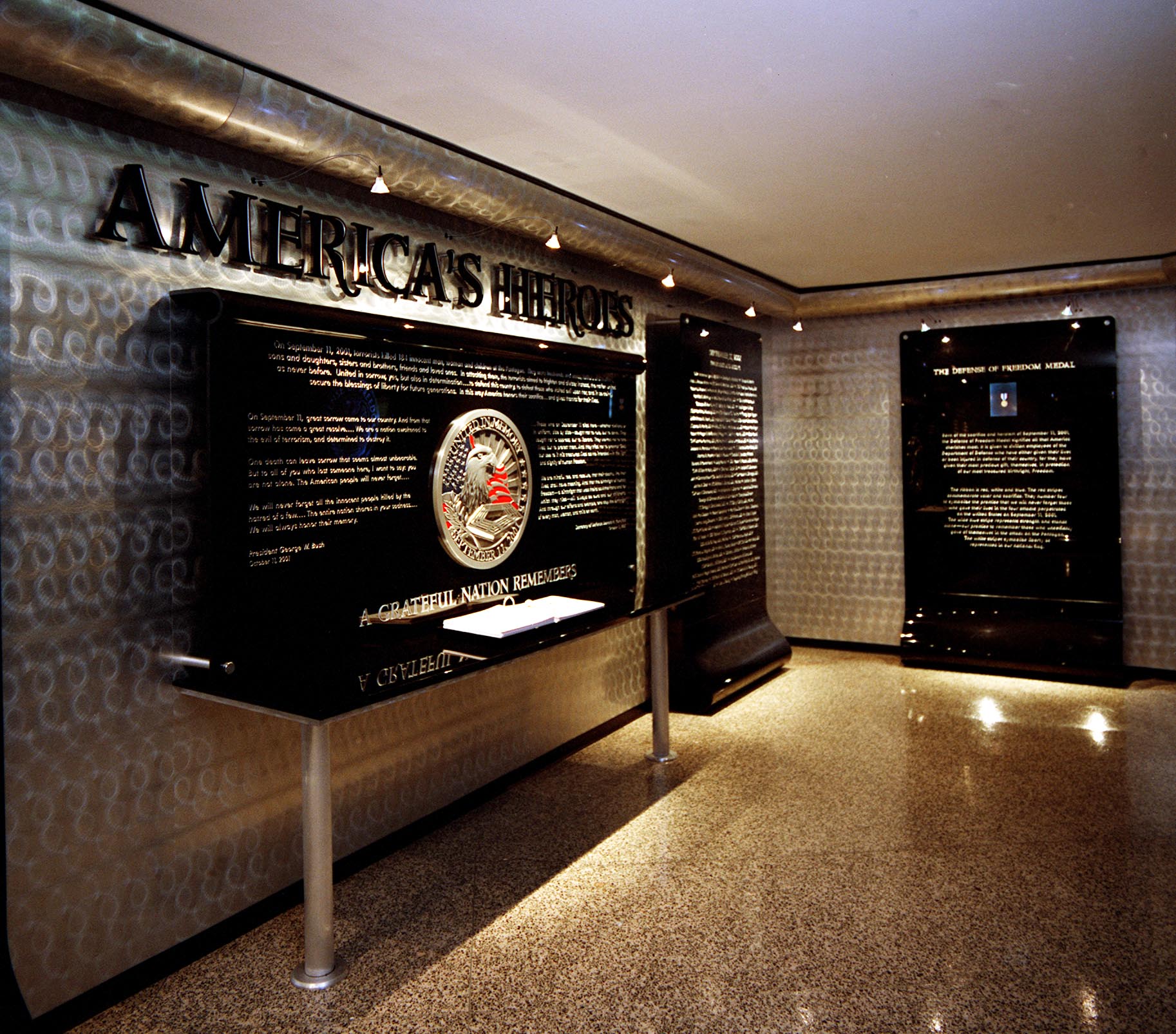 Dedication ceremony marking the start of construction on the Pentagon Memorial

Pentagon lit up for 9/11 sixth anniversary

Temporary chapel created on Pentagon grounds one day after the attack

Pentagon chapel, established inside the building as part of reconstruction following the attack

Main article: Memorials and services for the September 11 attacks

Retrieved from "https://military.wikia.org/wiki/Pentagon_Memorial?oldid=5046251"
Community content is available under CC-BY-SA unless otherwise noted.