Corso published The Day After Roswell, about how he was involved in the research of extraterrestrial technology recovered from the 1947 Roswell UFO Incident. On July 23, 1997, he was a guest on the popular late night radio show, Coast to Coast AM with Art Bell where he spoke live about his Roswell story. This interview was rebroadcast by Coast to Coast AM on July 3, 2010.

After joining the Army in 1942, Corso served in Army Intelligence in Europe, becoming chief of the US Counter Intelligence Corps in Rome. In 1945, Corso arranged for the safe passage of 10,000 Jewish World War II refugees out of Rome to the British Mandate of Palestine. He was the personal emissary to Giovanni Battista Montini at the Vatican, later Pope Paul VI, during the period when the "Nazi Rat Lines" were most active.

During the Korean War (1950–1953), Corso performed intelligence duties under General Douglas MacArthur as Chief of the Special Projects branch of the Intelligence Division, Far East Command. One of his primary duties was to keep track of enemy prisoner of war (POW) camps in North Korea.[2] Corso was in charge of investigating the estimated number of U.S. and other United Nations POWs held at each camp and their treatment. At later hearings of the Senate Select Committee on POW/MIA Affairs, Corso provided first hand testimony, that many hundreds of American POW's were abandoned at these camps.[3][4]

At those hearings, Senator John McCain [R-AZ] dismissed these undocumented and uncorroborated allegations made by Corso as being extremely difficult to believe. McCain implied that Corso was guilty of fabricating the truth and essentially terminated the testimony being given by Corso immediately after a severe verbal reprimand on live television. McCain noted that his personal relationship with Eisenhower, led him to believe that Eisenhower was just not capable of allowing known American POWs to remain incarcerated after the termination of the Korean War.[citation needed]

Corso was on the staff of President Eisenhower's National Security Council for four years (1953–1957).

In 1961, he became Chief of the Pentagon's Foreign Technology desk in Army Research and Development, working under Lt. Gen. Arthur Trudeau.

Main article: The Day After Roswell

In his book The Day After Roswell (co-author William J. Birnes) claims he stewarded extraterrestrial artifacts recovered from a crash near Roswell, New Mexico, in 1947.

Corso says a covert government group was assembled under the leadership of the first Director of Central Intelligence, Adm. Roscoe H. Hillenkoetter (see Majestic 12). Among its tasks was to collect all information on off-planet technology. The US administration simultaneously discounted the existence of flying saucers in the eyes of the public, Corso says.

According to Corso, the reverse engineering of these artifacts indirectly led to the development of accelerated particle beam devices, fiber optics, lasers, integrated circuit chips and Kevlar material.

In the book, Corso claims the Strategic Defense Initiative (SDI), or "Star Wars", was meant to achieve the destructive capacity of electronic guidance systems in incoming enemy warheads, as well as the disabling of enemy spacecraft, including those of extraterrestrial origin. 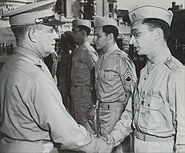 In Germany, 1960
Add a photo to this gallery

Retrieved from "https://military.wikia.org/wiki/Philip_J._Corso?oldid=4781680"
Community content is available under CC-BY-SA unless otherwise noted.