Pilot officer (Plt Off officially in the RAF; PLTOFF in the RAAF and RNZAF; formerly P/O in all services, and still often used in the RAF) is the lowest commissioned rank in the Royal Air Force[1] and the air forces of many other Commonwealth countries. It ranks immediately below flying officer. It normally denotes an officer who has elected to join as a non-graduate direct entrant officer, as those with degrees usually serve only a week at the rank after graduation from the RAF College Cranwell. Some newly commissioned officers hold the lower grade of acting pilot officer.

In the Royal Flying Corps, officers were designated pilot officers at the end of pilot training. As they retained their commissions in their customary ranks (usually second lieutenant or lieutenant), and many of them had been seconded from their ground units, the designation of pilot officer was a position title rather than a rank.

The rank is normally held by an officer who has joined as a non-graduate direct entrant to the RAF. Those with degrees usually serve only a week in the rank after graduation from the RAF College Cranwell. All newly commissioned non-graduate officers hold the lower grade of acting pilot officer for one year.

The rank insignia consists of a thin blue band on slightly wider black band. This is worn on both the lower sleeves of the tunic or on the shoulders of the flying suit or the casual uniform. 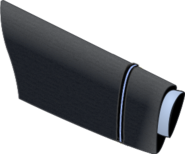 An RAF pilot officer's sleeve on No.1 best dress uniform
Add a photo to this gallery

Retrieved from "https://military.wikia.org/wiki/Pilot_officer?oldid=4538797"
Community content is available under CC-BY-SA unless otherwise noted.