Pointe du Hoc (French pronunciation: ​[pwɛ̃t dy ɔk]) is a prominent 100 ft (30 m) cliff overlooking the English Channel on the coast of Normandy in northern France. During World War II it was the highest point between Utah Beach to the west and Omaha Beach to the east. The Germans fortified the area with concrete casements and gun pits. On D-Day (6 June 1944) the United States Army Ranger Assault Group successfully assaulted Point du Hoc after scaling the cliffs.

Pointe du Hoc lies 4 mi (6.4 km) west of the center of Omaha Beach.[1][2] As part of the Atlantic Wall fortifications, the prominent clifftop location was fortified by the Germans. The battery was initially built in 1943 to house six captured French First World War vintage GPF 155mm K418(f) cannons positioned in open concrete gun pits. The battery was occupied by the 2nd Battery of Army Coastal Artillery Regiment 1260 (2/HKAA.1260).[3] To defend the promontory from attack elements of the 352nd Infantry Division were stationed at the battery.

To provide increased defensive capability, the Germans began upgrading the battery in the Spring of 1944 with fully enclosed H671 concrete casements. The plan was to build six casements but two were unfinished when the location was attacked. These casements were built over and in front of the circular gun pits that housed the 155mm French cannons. Also built was a H636 observation bunker and L409a mounts for 20mm Flak 30 anti-aircraft cannon. The 105mm guns would have threatened the Allied landings on both Omaha and Utah beaches when finished, risking heavy casualties to the landing forces. The location was bombed in April 1944 and following this the Germans removed the French 155mm cannons. During preparation for Operation Overlord it was determined that Pointe du Hoc would still need to be attacked by ground forces to prevent the Germans using the casements for observation purposes. The U.S. 2nd and 5th Ranger Battalions were given the task of assaulting the strong point early on D-Day. Elements of the 2nd Battalion went in to attack Pointe du Hoc but initial delays meant the remainder of the 2nd Battalion and the complete 5th Battalion landed at Omaha Beach as their secondary landing position.

Though the Germans had removed the main armament from Pointe du Hoc, the beachheads were shelled from the nearby Maisy battery. The rediscovery of the battery at Maisy has shown that it was responsible for firing on the Allied beachheads until June 9, 1944.[4]

Pointe du Hoc lay within the General Leonard Gerow's V Corps field of operations. This then went to the 1st Infantry Division (the Big Red One) and then down to the right-hand assault formation, the 116th Infantry Regiment attached from 29th Division. In addition they were given two Ranger battalions to undertake the attack. The Ranger battalions were commanded by Lieutenant Colonel James Earl Rudder. The plan called for the three companies of Rangers to be landed by sea at the foot of the cliffs, scale them using ropes, ladders, and grapples whilst under enemy fire, and engage the enemy at the top of the cliff. This was to be carried out before the main landings. The Rangers trained for the cliff assault on the Isle of Wight, under the direction of British Commandos.

Major Cleveland A. Lytle was to command Companies D, E, and F of the 2nd Ranger Battalion (known as "Force A") in the assault at Pointe du Hoc. During a briefing aboard the Landing Ship Infantry HMS Ben My Chree he heard that Free French Forces sources reported the guns had not been removed. Impelled to some degree by alcohol,[5] Lytle became quite vocal that the assault would be unnecessary and suicidal and was relieved of his command at the last minute by Provisional Ranger Force commander Rudder. Rudder felt that Lytle could not convincingly lead a force with a mission that he did not believe in.[6] Lytle was later transferred to the 90th Infantry Division where he was awarded the Distinguished Service Cross.[7]

The assault force was carried in ten landing craft with another two carrying supplies and four DUKW amphibious trucks carrying the 100 ft (30 m) ladders - requisitioned from the London Fire Brigade. One landing craft carrying troops sank and all but one of its occupants drowned, another was swamped. One supply craft sank and the other put the stores overboard to stay afloat. German fire sank one of the DUKWs. Once within a mile of the shore, German mortars and machine guns fired on the craft.[8]

These initial setbacks resulted in a 40-minute delay in landing at the base of the cliffs, but British landing craft carrying the Rangers finally reached the base of the cliffs at 7:10am with approximately half the force it started out with. The landing craft were fitted with rocket launchers to fire grapnels and ropes up the cliffs. As the Rangers scaled the cliffs the Allied destroyers USS Satterlee and HMS Talybont provided them with fire support and ensured that the German defenders above could not fire down on the assaulting troops.[9] The cliffs proved to be higher than the ladders could reach.

The original plans had also called for an additional, larger Ranger force of eight companies (Companies A and B of the 2nd Ranger Battalion and the entire 5th Ranger Battalion) to follow the first attack, if successful. Flares from the clifftops were to signal this second wave to join the attack, but because of the delayed landing, the signal came too late, and the other Rangers landed on Omaha instead of Pointe du Hoc. The force at the top of the cliffs also found that their radios were ineffective.[10]

Upon reaching the fortifications, most of the Rangers learned for the first time that the main objective of the assault, the artillery battery, had been removed. The Rangers regrouped at the top of the cliffs, and a small patrol went off in search of the guns. Two different patrols found five of the six guns nearby (the sixth was being fixed elsewhere) and destroyed their firing mechanisms with thermite grenades.[5]

The added impetus these 500 plus Rangers provided on the stalled Omaha Beach landing has been conjectured to have averted a disastrous failure there, since they carried the assault beyond the beach, into the overlooking bluffs and outflanked the German defenses.

The costliest part of the battle for Pointe du Hoc for the Rangers came after the successful cliff assault. Determined to hold the vital high ground, yet isolated from other Allied forces, the Rangers fended off several counterattacks from the German 914th Grenadier Regiment. The 5th Ranger Battalion and elements of the 116th Infantry Regiment headed towards Point du Hoc from Omaha Beach. However, they preventing from linking up with the 2nd Rangers during the evening of June 6, 1944. During the night the Germans forced the Rangers into a smaller enclave along the cliff, but were supported by fire from Allied vessels. On the evening of 7 June 1944, General Kraiss ordered the 352nd Division to withdraw. It was not until noon on 8 June that the Rangers at Pointe du Hoc were finally relieved when tanks and infantry of the 116th Infantry Regiment, along with the 6th Ranger Battalion finally linked up with the survivors.

06.39 – H-Hour - D, E and F companies of 2nd Ranger Battalion approach the Normandy coast in a flotilla of twelve craft.

07.05 – Strong tides and navigation errors mean the initial assault arrives late and the 5th Ranger Battalion as well A and B companies from 2nd Battalion move to Omaha Beach instead. 07.30 – Rangers fight their way up the cliff and reach the top and start engaging the Germans across the battery. Rangers discover the casemates are empty.

For the rest of the day the Rangers repel several German counter-attacks. During the evening, one patrol from the Rangers that landed at Omaha beach make it through to join the Rangers at Pointe du Hoc.

The Rangers continue to defend an ever smaller area on Point du Hoc against German counter-attacks.

Afternoon – A platoon of Rangers arrives on an LST, with wounded removed.

Evening – The Rangers are relived by troops arriving from Omaha beach.

In the aftermath of the battle, some Rangers became convinced that French civilians had taken part in the fighting on the German side. A number of French civilians accused of shooting at American forces or of serving as artillery observers for the Germans were executed.[13]

Pointe du Hoc now features a memorial and museum dedicated to the battle. Many of the original fortifications have been left in place and the site remains speckled with a number of bomb craters. On January 11, 1979, this 13-hectare field was transferred to American control, and the American Battle Monuments Commission was made responsible for its maintenance.[14] 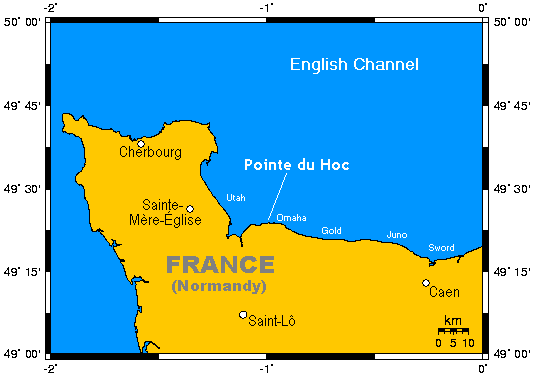 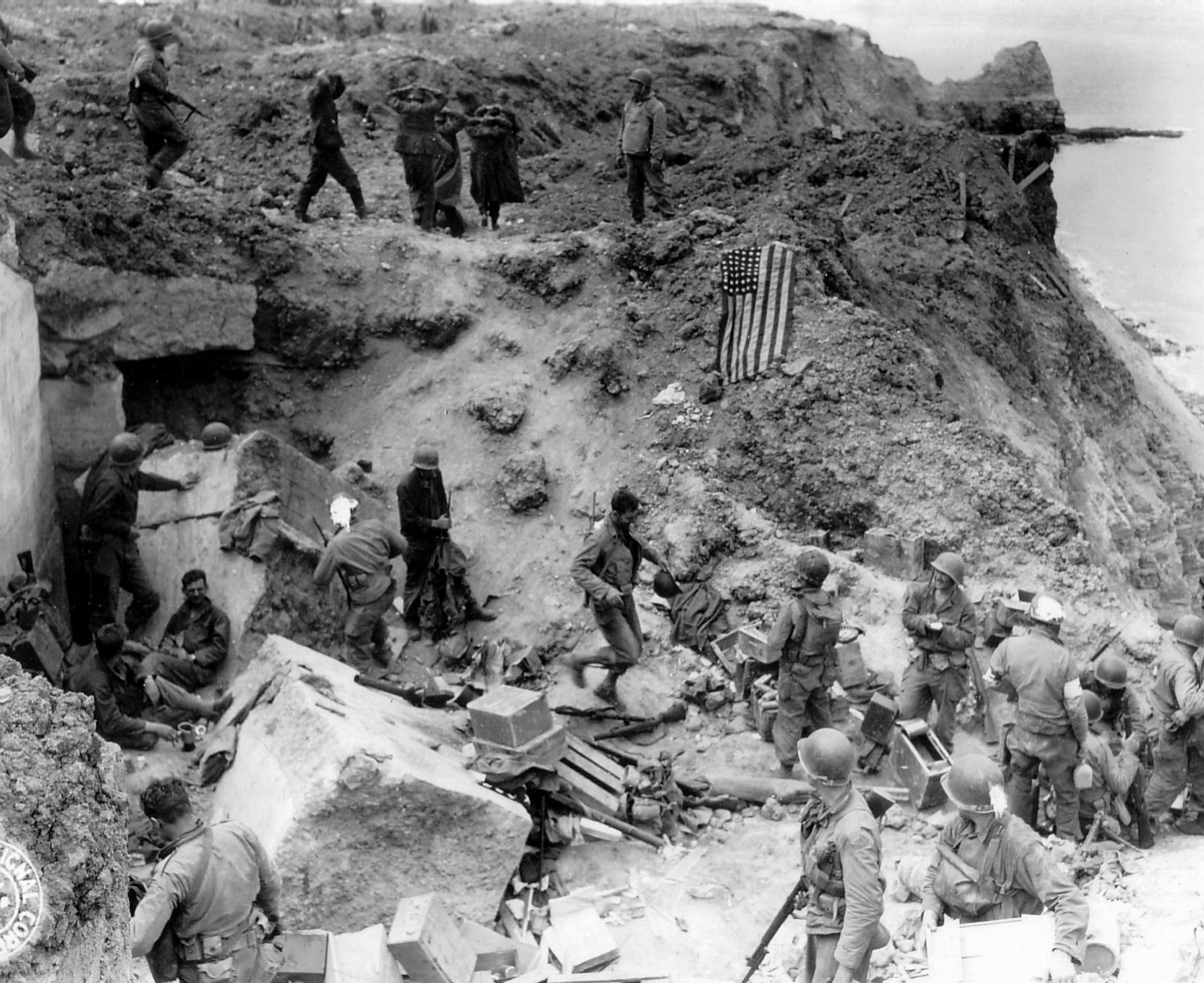 Photo taken on D+2, after relief forces reached the Rangers at Point Du Hoc. The American flag had been spread out to stop fire of friendly tanks coming from inland.

US President Ronald Reagan giving a speech commemorating the 40th anniversary of the event.

Part of the modern day site, with the remains of a gun pit in the foreground.

Present day view of the cliff of Pointe du Hoc with the monument on the top-right.
Add a photo to this gallery

Panoramic view of Pointe du Hoc during sunrise on a early January morning on top of one of the bunkers.

The assault on Pointe du Hoc has been portrayed in the video game Call of Duty 2, in which the player is a member of the Dog Company, 2nd Ranger Battalion, and is faced with destroying the artillery battery and fending off the counter-attacks.[15]

Pointe Du Hoc is also a map in the strategy game Company of Heroes.

Retrieved from "https://military.wikia.org/wiki/Pointe_du_Hoc?oldid=4160592"
Community content is available under CC-BY-SA unless otherwise noted.