The QF 6 pounder Hotchkiss was a light 2.25 inch (57 mm) naval gun and coast defence gun of the late 19th century used by many countries, and was adapted for use in the early British tanks in World War I.

These guns were used as examination guns at coastal forts in World War II, including Barrett Point battery near Prince Rupert, British Columbia

The UK adopted a 40-calibres (i.e. 90 inch barrel) version as Ordnance QF Hotchkiss 6 pounder gun Mk I and Mk II or QF 6 pounder 8 cwt. It was manufactured under licence by the Elswick Ordnance Company.

They were originally mounted for use against the new (steam-driven) torpedo boats which started to enter service in the late 1870s.

During World War I the navy required many more guns and a version with a single-tube barrel was developed to simplify manufacture, identified as "6 pdr Single Tube". Initially these guns were only allowed to be fired with a special lower charge but in 1917 they were relined with A tubes as Mk I+++ which enabled them to use the standard 6 pounder ammunition.[5]

After World War I the gun was considered obsolete for combat use, but continued in use as a saluting gun and as a sub-calibre training gun. Many were brought back into active service in World War II for arming small vessels for coastal and anti-submarine warfare, and for coastal defence. The vessels so armed included early models of the famous Fairmile D Motor Gunboats, some of which were not re-armed with the modern autoloading 6 pdr MkIIA until late 1944.[6]

The gun was used to equip Male versions of the early British tanks, Mk I - Mk III. In 1916 the British Army was faced with the difficulty of quickly providing a new class of weapon with no prior battlefield experience, and the existing Hotchkiss 6 pounder naval gun appeared to most closely meet the need. A single gun was mounted in each sponson (side barbette), i.e. 2 per Male tank (tanks armed only with machine guns were designated Female), able to fire forwards or to the side.

The gun turned out to be too long for practical use in action in side sponsons, as it could come into contact with the ground or obstacles when extended to the side as the tank travelled over uneven ground. The British chose to shorten the gun rather than change its location, and replaced it in 1917 in the Mk IV tank onwards by the shorter QF 6 pounder 6 cwt.

Britain lacked any dedicated air defence artillery early in World War I and up to 72[7] 6 pounders were adapted to high-angle pedestal mountings at key establishments in Britain for close air defence by 1916. They are not listed as still being in service in this role at the end of the war,[8] presumably because German bombing attacks were conducted from relatively high altitudes which would have been beyond this gun's range. 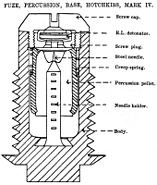 The 57 mm Hotchkiss naval gun was used by the Icelandic Coast Guard, and served as the main gun of most of its patrol vessels between the 1920s until 1990 when it had been completely replaced with 40 mm Bofors autocannons.

The US Army also used the Hotchkiss six pounder. As the primary defender of coastal fortifications and harbors, the US Army had the need for lighter guns to supplement their shore batteries, of course the Army tended to be in an experimental phase like the Navy, trying and testing new weapons in an era when military budgets were expanding after decades of Congressional stinginess. It appears that the US Army and US Navy, while both using the "Mark" system, assigned their designations to different ordnance.

The 57 mm Hotchkiss naval gun was the standard secondary or tertiary armament on most Japanese destroyers built between 1890 and 1920, and was still in service as late as the Pacific War.