Since its inception, the RAB has seized a total of 3,149 illegal arms and more than 36,000 rounds of ammunition, and has made more than 500 arrests.[citation needed]

Because RAB is composed of officers and troops from Bangladesh Police and Bangladesh Armed Forces, it was necessary to attribute a common rank insignia to the RAB badges. Such insignia can be seen in the illustrations below. 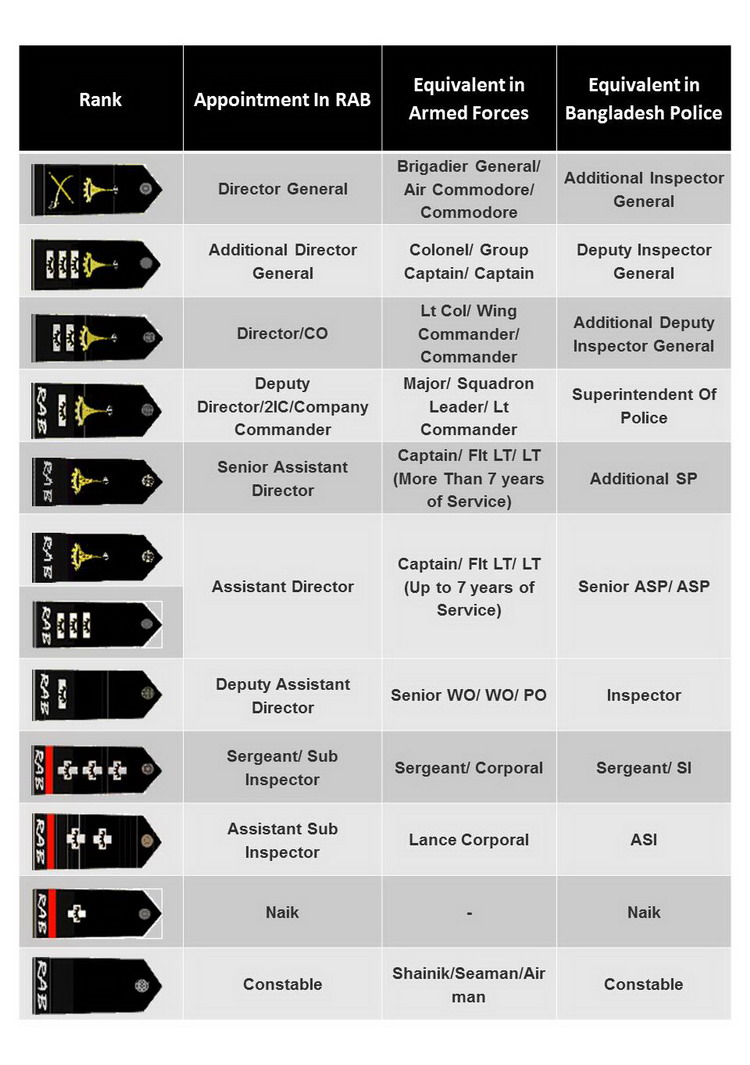 RAB also has 12 battalion size field units spread all over the country. Among them, 5 are located in the capital Dhaka. The units are located as follows:

Main activities and types of work done by RAB are:

Counter-Terrorism RAB apprehended numerous terrorism suspects during the course of their tenure.

Anti Drugs RAB has been involved in the control of illegal substances such as Yaba, Phensidyle and Heroin.

National Common or annual needs Many national needs are filled by RAB by providing extra duty during Eid-ul-Fitr, Puja, world Ijtema and Akheri Munazat, among other events. They also contribute resources during elections, such as the Narayangonj City Corporation Election.

The following is a table containing details of major arrests by the RAB according to their official website:[1]

Although the RAB has been successful in apprehending several high-profile terrorists, including the infamous Bangla Bhai, Amnesty International has accused RAB of numerous deaths, which have been attributed to crossfire.[2][3] In March 2010, the battalion leader claimed 622 deaths were due to 'crossfire', while some human rights organisations claimed that more than 1,000 extrajudicial killings were the product of the battalion.[4] Further, there have been many reports of torture in connection with the battalion's activities.[5][6]

Limon Hossain, a college student at Jamaddarhat at Rajapur Upazila in Jhalakati, was shot at by RAB personnel near his house on March 23, 2011, triggering local and international outcry. His left leg had to be amputated as a result. The battalion filed two cases that day with the Rajapur police implicating Limon in an arms case and accusing him of obstructing police duties.[7] The government finally decided to withdraw the cases against Limon on July 9, 2013, citing his need to return to a "healthy and normal life".[8]

Retrieved from "https://military.wikia.org/wiki/Rapid_Action_Battalion?oldid=5105706"
Community content is available under CC-BY-SA unless otherwise noted.