The Republican Guard (French language: Garde républicaine) is part of the French Gendarmerie. It is responsible for providing security in the Paris area and for providing guards of honor. Its missions include:

The close physical protection of the President of France is entrusted to the GSPR (Groupe de sécurité de la présidence de la République), and the SPHP (Service de Protection des Hautes Personnalités); neither is part of the Guard.

The Republican Guard is the heir of the various bodies that preceded it in the course of French history whose task was to honor and protect the high authorities of the State and City of Paris. Its name derives from the Municipal Guard of Paris, established on 12 Vendémiaire XI (October 4, 1802) by Napoleon Bonaparte. It distinguished itself in battles of historical significance, including Danzig and Friedland in 1807, Alcolea in 1808 and Burgos in 1812.

In 1813 it was dissolved following the attempted coup of General Malet and replaced by the Imperial Gendarmerie of Paris and then, under the Restoration, the Royal Guard of Paris and the Royal Mounted Police of Paris. In 1830, it was recreated, and again removed after the Revolution of 1848 in favor of the Civic Guard (which proved to be a transient institution).

June 1848 saw the creation of the Republican Guard of Paris, including an infantry regiment and a regiment of cavalry. It received its insignia July 14, 1880. It took part in the First World War and saw its flag and banner decorated with the Knight's Cross of the Legion of Honour. During the Second World War, it reported to the police headquarters and took the name of Guard of Paris. Part of its staff rallied to General de Gaulle and the Guard was involved in the fighting alongside the FFI at the liberation of Paris.

In 1952, the guard was renamed the Legion of the Republican Guard of Paris and took part in the Indochina War, which earned it the Croix de Guerre.

In 1978, the guard took its current name of "Republican Guard." President Giscard d'Estaing gave, on 11 November 1979, its new insignia. Michele Alliot-Marie, Minister of Defence, said in October 2002: "The Republican Guard has a popularity that transcends borders," it contributes "to the splendour of the French military and France." [2]

The Republican Guard belongs to the French National Gendarmerie. It is made up of 3200 men and women (drawn from an overall body of 105,000 gendarme). As a historically Parisian organization, the guards wear the armorial bearings of the city on their uniforms.

It consists of two infantry regiments (one includes a motorcycle squadron) and a horse cavalry regiment. It also has four musical formations, as well as groups demonstrating prowess in horseback or motorcycle maneuvers. The regiment is commanded by a colonel and his staff.

“The Republican Guard has a popularity which exceeds the borders,” it contributes “to the prestige of the French Army and France.” (Minister for Defense, October 2002)

Detachments of the cavalry regiment reinforce the two infantry regiments in carrying out ceremonial and security roles in and around state buildings. These include the lining of both sides of the entry stairs of the Elysium or Matignon Palaces (and other buildings) by dismounted cavalry on special occasions. These Republican Guards belong to the Cavalry Regiment and not to the infantry units whose mission is to ensure the security of these palaces and of senior government figures. Certain ceremonial duties in the form of honour guards are performed when state visits are made to the Paris museums or the Opera, as well as at the moment of the descent of the Academicians beneath the cupola of the French Academy.

Formerly, one could hire Republican Guards for private fashionable evenings but this option was terminated by President Giscard d'Estaing.

Some guards are assigned to more specific missions:

The cavalry also includes the Fanfare of Cavalry and the brass band of Cavalry. It also includes more than 500 soldiers and civilians which includes a growing number of women (a little more than 8%). It has approximately 550 horses (11% mares) and remains the last unit of the French Army with horses.

The regiment is composed of:

This unit has a section of high level sportsmen, in particular Hubert Perring, dressage champion of France in 2005, and member of the French team for the World Equestrian Games of 2006.

The Republican Guard has two regiments of infantry:

Depending on staff availability, this formation has two main parts:

It was founded in 1848 by Jean-George Paulus. 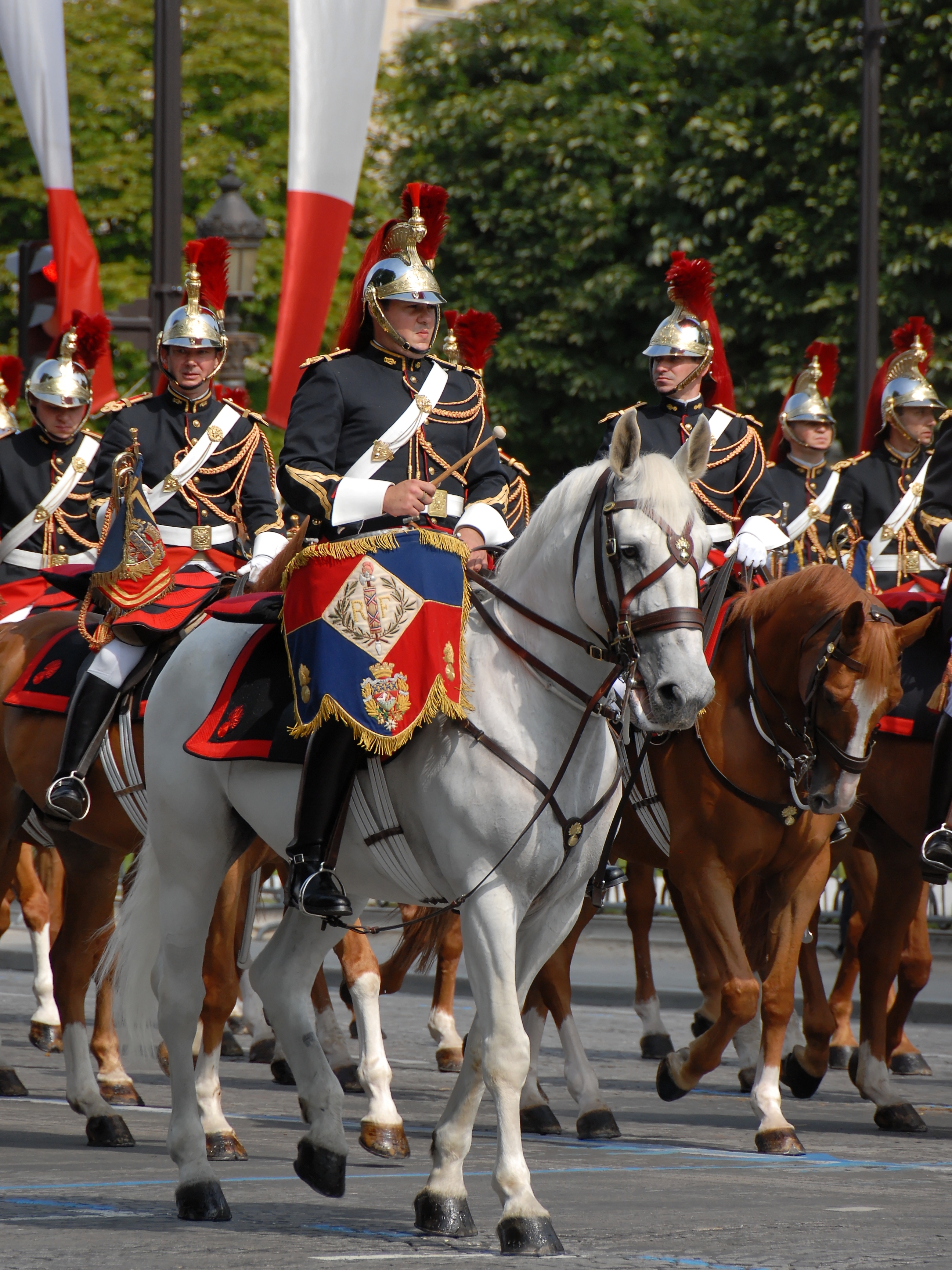 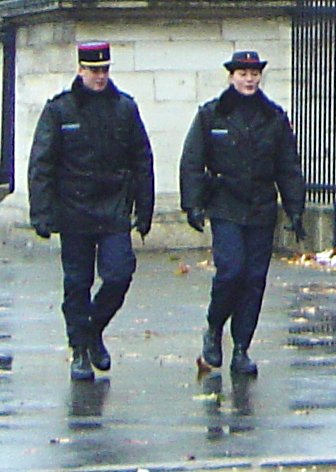 Mounted guards in service dress patrolling near the Louvre

Casern of the Republican Guard in the Quartier des Célestins.
Add a photo to this gallery

Retrieved from "https://military.wikia.org/wiki/Republican_Guard_(France)?oldid=4687913"
Community content is available under CC-BY-SA unless otherwise noted.