Richard William "Dick" Dowling (1838 – September 23, 1867) was the victorious commander at the Second Battle of Sabine Pass in the American Civil War, and is considered Houston, Texas's first prominent citizen and hero.

Dowling was born in Knockballyvisteal, Milltown, near Tuam, County Galway, Ireland in 1838, the second of eight children, born to Patrick and Bridget Dowling (née Qualter). He emigrated with his parents and six siblings to New Orleans in the United States in 1846.[1] In 1853, a Yellow Fever outbreak in New Orleans took the lives of his parents and four of his siblings. Orphaned, Dowling settled in Houston where he established a successful chain of saloons starting in 1857. Dowling was described as a likable red-headed Irishman and wore a large mustache. In 1857 he married Elizabeth Ann Odlum, daughter of Benjamin Digby Odlum.

By 1860, Dowling owned three saloons. His most successful saloon was named the Bank of Bacchus,[2] located on Courthouse Square in downtown Houston. "The Bank" as it was known locally became Houston's most popular social gathering place in the 1860s and was renowned for its hospitality. Dowling had previous experience as a barkeeper in the Continental Coffeehouse in New Orleans and in Houston opened a saloon known as "The Shades". Quickly establishing himself, Dowling courted publicity from local newspapers and also made a number of property investments. He was also involved in setting up Houston's first gaslight company, and was first to have it installed in his home and "The Bank". Dowling was a founding member of Houston's Hook and Ladder Company Number One fire department and was also involved in running the city's first streetcar company[1]

At the outbreak of the Civil War Dowling enlisted in a Texas unit composed primarily of Irish dockworkers and known as the Jefferson Davis Guards. He participated in the Battle of Galveston and in 1863 now-Lieutenant Dowling along with a company of 44 men, almost all Irish, known as the Davis guards, was assigned to an earthen artillery post on the Sabine River named Fort Griffin. Known for his skilled artillery work, Dowling spent his time at the remote outpost instructing his men in artillery targeting drills across the Sabine River's two channels, which the fort guarded. He implemented an innovative idea, placing colored poles in the river marking the distance and elevation for his artillery crews.

On September 8, 1863 a Union navy flotilla of 5,000 men attempted to enter the channel. Dowling's artillery drills paid off as the Confederates scored several direct hits on the flotilla, forcing its retreat and leading to the capture of 350 prisoners and a large quantity of supplies, thwarting a Union invasion of Texas.[3]

The Confederate government offered its gratitude and admiration to Dowling and his unit[4] , while the ladies of Houston presented the unit with medals.[5] The medals were actually Mexican coins that had been smoothed down on one side and had the information carved into them. They were inscribed " Sabine Pass, 1864".[6]

After the war and death[]

After the battle of Sabine Pass Dowling was elevated to hero status in his hometown of Houston. He subsequently served as a recruiter for the Confederacy and was personally commended for his action at the battle by Jefferson Davis. After the war Dowling returned to his saloon business in Houston and quickly became one of the city's leading businessmen. Dowling's promising future was cut short by a yellow fever epidemic and he died on September 23, 1867.[citation needed]

He was buried at St. Vincent's Catholic Cemetery, the oldest Catholic cemetery in Houston.[7]

In 1905 the city of Houston commissioned a statue of Lt. Dowling, and it was erected at city hall until 1939 when it was moved to Sam Houston Park.[8] When the city hall was moved to a newer building in 1958 the statue was relocated to Hermann Park, near the monument to Sam Houston, where it remains today. Dowling's statue has appeared numerous times in local newspapers as his sword was repeatedly stolen by pranksters. In 1993, the Dick Dowling Society completed restoration on Dowling's statue. Annually, usually on the Saturday closest to St. Patrick's Day, the Dick Dowling Society holds a commemoration ceremony at the statue. This event is regularly attended by a number of the descendants of his sister, Josephine Dowling. Richard and Elizabeth had two children, Mary Anne Dowling and Felize "Richard" Sabine Dowling.[9]

Considering his Confederate ties, Dowling has an ironic local legacy in Houston as the namesake of Dowling Street, a major artery of the city's predominantly African-American Third Ward and Dowling Middle School, a middle school that serves the city's predominantly African-American and Hispanic south side. Tuam Street, another major artery named for Tuam, is also named in Dowling's honor by recognizing his place of birth in Ireland.

In 1998, the town of Tuam, also placed a bronze memorial plaque of Dowling on its Town Hall facade bearing his image and explaining his feats.[10] 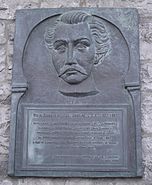