The Moroccan air force was formed on November 19, 1956 as the “Aviation Royale Chérifienne” (Sherifian Royal Aviation).

The political rift with the USSR pushed Morocco to seek a new ally in the United States, acquiring from the latter six Northrop F-5 combat aircraft (4 single-seat F-5A and 2 two-seat F-5B) and another 20 F-5A and four F-5B in 1966. Transport aircraft acquired at the time included 10 Douglas C-47 Skytrains, 18 Fairchild C-119Gs and six Lockheed C-130 Hercules. The helicopter fleet was composed of 24 Augusta-Bell AB205As, and 12 North American T-6 Texans were used for pilot training.

The next modernization of the Moroccan Air Force took place just before the Sahara conflict, with the acquisition of Mirage F-1CH attack aircraft, Beech T-34C Mentor training aircraft, Aerospatiale Puma helicopters, and new Hercules transport aircraft to substitute the older units. Modernization of Northrop F-5 Freedom Fighter with improved technology and the purchase of 24 Alpha Jet E would later be undertaken by the RMAF; another modernization of the fleet of Dassault Mirage F1 was achieved in 1996 and 1997.

During the 90’s there were plans for purchasing Mirage 2000 or F-16 fighter aircraft, however due to unavailable funding they were not realized. Currently, and possibly as a result of the Algerian negotiations with Russia to purchase MiG-29 and SU-30MKA attack aircraft, the Royal Moroccan Air Force started to modernize its ageing fleet.

It's not clear if a Squadron of Northrop F-5 participated in the Six-Day War, being transferred to the EAF and participating only for air patrol behind the scenes.[1]

During the Yom Kippur War a Squadron of Moroccan Air Force Northrop F-5A joined the Egyptian 69 Squadron at Tanta on 19 October 1973. At least 14 MiG-17s and also around a dozen of F-5As were deployed. The F-5As arrived after a lengthy trip, via Algeria, Tunis and Libya, accompanied by Lockheed C-130 Hercules transports that carried spare parts, weapons, and equipment. Moroccans started flying tasked with CAP missions over the Nile Delta. In January 1974 two F-5As armed with AIM-9B and 20mm cannons, intercepted a pair of IAF Mirage IIICs on a reconnaissance mission. As the Israelis turned away once the F-5As became evident, dragging both RMAFs fighters behind them, concerned about a possible ambush by IAFs F-4E Phantom IIs the EAF mission control ordered both Moroccan Fighters to return, replacing them by two EAF MiG-21MFs.[2]

At the beginning of the conflict, Fouga Magister (based at Laayoune) and North American T-6 Texan (based at Ad Dhakla) were initially in ground support mission and night attacks. Later on, the F-5 aircraft were thrown into action, to strike against POLISARIO targets. From the beginning, the objective of Morocco was to create a controlled and safe zone in the area considered as “useful” for its political and economic interests, that is, the Capital Al-Aaiun, the religious center Smara, and the phosphate field of Bu-Craa.

In 1980 construction of the Sahara defensive walls began, consisting of every type of obstacle for infantry and armoured vehicles, such as mines and radars, all backed by Quick Intervention Units (Détachements d'Intervention Rapide) able to move to and quickly reinforce every location along the wall, aided by air-transport composed of Super Puma, AB-205 and CH-47 Chinook helicopters. As to the anti-tank defenses, it was decided additionally to use Aérospatiale SA 342 Gazelle helicopters with TOW missiles to neutralize the POLISARIO T-54, T-55 and BMP tanks. And apart from the ground radars of the Wall, two C-130 Hercules with SLAR system were also used for the detection of enemy units.

After the loss of 1 F-5A and 2 RF-5A in the battles, 20 F-5E "Tiger II" and 4 F-5F were acquired. The main problem that faced the F-5 in Western Sahara was its insufficient range to realize missions in depth in the vast battlefield of the Sahara desert. To minimize this problem, a B.707-138B fitted with Beech hose units at the wingtips for refuelling and 2 Lockheed KC-130H were also delivered beginning 1982 to provide the Moroccan “Tiger II” with air-to-air refueling, and consequently increase their attack range.

The Mirage F-1 were responsible for defending the air-space against a possible Libyan or Algerian attack, whose governments supported both financially and politically the Polisario Front, during the beginning of the conflict.

In 1977, the Moroccan Mirage pilots started their training in an Air-force base located in Orange, France. In this same year, the Moroccan Air Force started receiving its first Mirage F-1C fighters. Libya and Algeria did not attack Morocco, and consequently Morocco destined its Mirages to ground-attack missions against POLISARIO. 3 Mirage Deliveries were received between 1978 and 1982. The first delivery were 30 Mirage F1-CH received between February and December 1978. The second one, was received between December 1979 and July 1982 and comprised 14 Mirage F1-EH. Between July 1980 and June a final delivery of 6 Mirage F-1EH-200 was received.

With the losses of Fouga Magister, the FARM decided to buy a total of 24 Rockwell OV-10A from the United States Marine Corps. The first 6 aircraft were delivered, but with the early loss of one of them, the rest were transferred to a maritime patrol role due to their inefficiency in combat. The program was cancelled for the rest of the aircraft.

[3] The Royal Moroccan Air Force started a progressive modernization program of its ageing fleet and their technical and operational capacities. In 2007, Morocco formally requested 24 T-6B Texan trainer aircraft, with very secondary light attack capability, and 24 F-16C/D Block 52+ aircraft as well as associated equipment and services, with:

The upgrade enabled the use of more advanced equipment as:

[4] Before all those upgrades, Improvements to F-5A/B were realised with the installation of "Tiger II" avionics on, probably, 8 F-5A and 2 F-5B. A contract was stipulated with the French company Sogerma at Bordeaux (France), all aircraft were received by 1998. [14] From 2001 to 2004 the RMAF's F-5E/F received a full refurbishment and upgrade from SOGERMA and Lahav (IAI). The upgraded improved the performance of the "Tiger II" to the level of the "Tiger III". The work carried up included:

The F-5E/F TIII acquired the capability to use new weapon systems such as Beyond Visual Range missiles and precise-guided weapons. RADA ACE ground debriefing station [15], a Simulator and AN/AAQ-28(V) LITENING targeting pods have also been purchased.

In 2008, 4 C-27J Spartan tactical transport aircraft were also purchased from Finmeccanica subsidiary Alenia Aeronautica, and the advanced trainer and CAS/COIN aircraft Alpha Jet E fleet was upgraded to the "E+ standard". One year later, 3 CH-47D were requested, to be added to the 9 CH-47C delivered in 1979 and 1982 (originally 12 were acquired). General Atomics received in 2010 export licenses to sell an unarmed export version of the Predator to Saudi Arabia, Egypt, U.A.E. and Morocco. Six aerial firefighting Bombardier 415 Superscooper were also purchased in 2011. The modernization and upgrade of the former US Air Force base in Ben Guerir Air Base to support its F-16 Fighting Falcon aircraft is also important. In March 2013, it has been confirmed that the RMAF have purchased from France at least 3 MALE UAVs IAI Heron.[5]

More purchases are expected or under negotiation according to some sources:

In July 2011, a RMAF C-130H crash killed 78 people. The plane was en route from Dakhla, a city in Morocco to the Kenitra Air Base in Kenitra. A stop-over landing at Guelmim was planned but the plane crashed 6 miles from the airport.

All 78 people on board were killed. The plane had 6 crew, 60 members of the army and 12 civilians, mainly partners traveling with their partners. 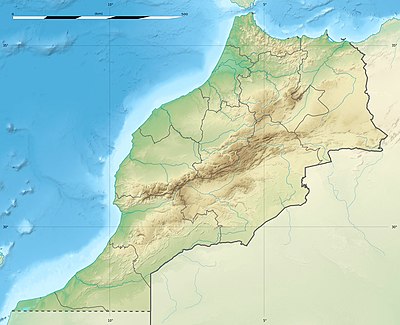 Main articles: List of aircraft and armament of the Royal Moroccan Air Force and List of active Moroccan military aircraft

The various aircraft of the Air Force include:[14]

The RMAF's tanker aircraft are part of air cargo transport and Aerial refueling squad (See Military transport), the main mission is to provide the fuel in large-scale operations and daily air operations and exercises. Air-to-air refueling is extensively used by fighters and cargo aircraft, this makes these aircraft an essential part of the Air Force's efficiency and RMAF's projection.

The reconnaissance aircraft of the RMAF are in roles such as intelligence gathering, battlefield surveillance, airspace surveillance, observation, border patrol and fishery protection.

Several unmanned remotely controlled vehicles or UAVs are also active, providing cheaper and more capable fighting machines that can be used without risk to aircrews. These aircraft are:

The Recon Pods can be installed in fighters, and contain reconnaissance sensors, imagery data recording system and can also carry air-to-ground data link system. The sensor are electro-optical and infrared, allowing day or night missions.

The Air Force's trainer aircraft are used to train pilots, navigators, and other aircrew in their duties. Given the expense of military pilot training, air forces typically conduct training in phases to winnow out unsuitable candidates, and different aircraft are used depending on the future posts:
Ab initio

Military transport helicopters are used in places where the use of conventional aircraft is impossible. They're used for air assault, cargo, MEDEVAC, command and control, and troop transport. They can also transport towed artillery and light vehicles either internally or as under-slung roles, small AFVs, supplies, etc. They are usually expected to land directly in a zone under enemy fire or used to reinforce and resupply landing zones.

The primary role of the attack aircraft is the capability of engaging targets on the ground, such as enemy infantry and armored vehicles. Weapons used on attack helicopters can include autocannons, machine-guns, rockets, and guided AGM missiles. RMAF's attack helicopters have to provide direct and accurate close air support (CAS) for ground troops, to destroy enemy armor concentrations, for armed scout role or to escort an aerial convoy.

The fighter aircraft of the RMAF's are used for air-to-air combat and ground-attack capabilities, also known as fighter-bombers. Secondary roles include interception of bombers and other fighters, reconnaissance and patrol. Other operational missions include intelligence-gathering by interception of signals with advanced ELINT pods, target identification, autonomous tracking, coordinate generation, and precise weapons guidance from extended standoff ranges.

Some RMAF's aircraft are used or were upgaded or transformed to be able to perform special missions.

[15] In 1985 the Moroccan Government started with a Cloud seeding program called 'Al-Ghait'. The system was first used in Morocco in 1999, It has also been used between 1999 and 2002 in Burkina Faso and from 2005 in Senegal. For this program two aircraft were equipped with special instruments:

The RMAF use aircraft, helicopters and other aerial resources to combat wildfires. The equipment used is:[16]

RMAF's aerobatic display team Marche Verte (Green March), was formed in 1988. The team performs unique formation takeoffs in which all seven planes are tied together with ropes. They perform some maneuvers in this configuration before a breaking apart maneuver which tears the ropes. All the team aircraft are painted in all-red, with green and yellow lines, smoke generators are also used. At present, the Marche Verte team flies with French-built CAP-232 aerobatic aircraft.

Due to the international role of the Kingdom of Morocco and national mobility needs, a large fleet of VIP aircraft is available for official travels of the royal family and government members:

Retrieved from "https://military.wikia.org/wiki/Royal_Moroccan_Air_Force?oldid=4688010"
Community content is available under CC-BY-SA unless otherwise noted.