The SIG SG 510 or Sturmgewehr 57 is a selective fire battle rifle manufactured by Schweizerische Industrie Gesellschaft (now SAN Swiss Arms) of Switzerland. It uses a similar roller-delayed blowback system to the H&K G3 and CETME rifles. It also has a SAW counterpart akin to the American Stoner 63.

The Sturmgewehr 57/SIG SG 510-1 was adopted for Swiss military service in 1957 and has been replaced by the lighter SIG SG 550 in year 1990, although some reservists used it several years longer.

The SG 510 is derived from the AM55 used during the 1950s. It is a selective fire rifle that employs a roller-delayed blowback operating system. Unusually, it was fitted with a shiny stainless steel bayonet.

The weapon is mainly made of pressed sheet-metal components to ease mass production. The SG 510 has a distinctive T-shaped bolt handle similar to the earlier K31. The butt-stock and hand guard of the rifle are rubberized for comfort and durability and the front hand guard is ribbed to provide a better grip.

The SG 510-1/Stgw 57 barrel is rifled along 520 mm (20.5 in) of its length and has a 270 mm (1 in 10.6 in) 4 groove rifling.[1] At the end of the barrel an integral muzzle brake is fitted that reduces recoil by about 25%. The barrel is surrounded by a perforated tubular barrel jacket with two mounting points for an integral bipod—one near the muzzle, and another near the receiver.

For recoil reduction the fixed butt-stock is fitted with a recoil buffer. The SG 510-1/Stgw 57 sports a large carrying handle at its balance point that can be used during quick position changes or on the march. On the right hand side of the rifle, there is a foldaway 'winter' trigger which enables the operator to use the rifle with arctic mittens. It also improves accuracy, because it reduces the force needed to pull the trigger.

The trigger mechanism has a three-position fire selector switch that is also the manual safety toggle that secures the weapon from accidentally discharging. The user selects the operating mode with a large side lever on the left side of the receiver that can be rotated to select S (safe), E (semi-automatic fire) or M (full-automatic fire).

For designated marksman use, the SG 550 can be equipped with a quick-detachable Kern 4×24 telescopic sight. The sight weighs 730 g (26 oz) and includes a variety of features, such as mounting components, a Bullet Drop Compensation (BDC) elevation adjustment knob for ranges from 100 to 600 m, an illuminated reticle that enables target acquisition in low-light conditions and a diopter eyesight correction adjustment. Included with the sight is a lens hood for mounting on the ocular that reduces image quality-impairing stray light and a gray filter for glare reduction.[2] A night vision sight with an infra red light can also be mounted. The Chilean version can fit a German-made Supra 4×24 telescopic sight.

The Swiss Army Stgw 57 is fed from curved detachable box magazines, made from aluminum and containing 24 rounds. Magazines with 20 and 30-round capacities are also available. Other accessories include the sling, the PE57 bayonet, and a special small-capacity magazine for grenade-launching cartridges.

Upon completion of their military service, members of the Swiss armed forces could obtain ownership of their personal SG 510 rifle by paying an administrative fee. These "civilianised" rifles were converted to a semiautomatic only configuration. As of 2007, around 40 percent of discharged soldiers choose to retain their weapon (nowadays the SIG SG 550), and the going rate for civilianised SG 510 rifles on the private weapons market is reported to vary between 400 and 500 Swiss francs.[3]

Stgw 57(/03) modified for sport shooting with a diopter and globe sight sighting line.

Receiver of a Stgw 57, seen from the right.

Receiver of a Stgw 57(/03) modified for sport shooting, seen from the left. 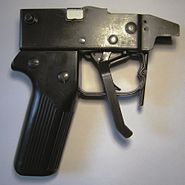 Stgw 57 cleaning kit pouch.
Add a photo to this gallery

Retrieved from "https://military.wikia.org/wiki/SIG_SG_510?oldid=4541744"
Community content is available under CC-BY-SA unless otherwise noted.