Military Wiki
Register
Don't have an account?
Sign In
Advertisement
in: Articles incorporating text from Wikipedia, Ships of the Isle of Man Steam Packet Company, Ships involved in the Dunkirk evacuation,
and 5 more

Edit
For other ships of the same name, see Mona's Isle.

SS (RMS) Mona's Isle (IV) was a steel, triple-screw turbine driven packet steamer operated by the Isle of Man Steam Packet Company between 1920 and 1948. Built in 1905 for the South Eastern & Chatham Railway Company, she was operated as Onward between Folkestone and Boulogne. In 1918 a fire was only controlled by scuttling the vessel. She was righted and in 1920, the hull was purchased by IOMSPCo to replace tonnage lost during the war. She was the first ship to complete a round trip during the evacuation of Dunkirk (Operation Dynamo), rescuing a total of 2,634 troops.

Onward was built at William Denny and Brothers shipyard on the River Leven adjoining the River Clyde at Dumbarton, in 1905. She was a steel, triple-screw turbine driven vessel built for the South Eastern and Chatham Railway for their Folkestone-Boulogne route.[1]

Omward was primarily used on the Folkestone - Boulogne service.

Her most prestigious passenger during her cross-channel service was His Majesty King Edward VII who crossed from Dover to Calais onboard Onward on the 4 May 1905.[2]

On 1 June 1908, Onward was involved in a head on collision with the steamer The Queen,[3] killing the bow lookout man. Following the collision, Onward returned to Folkestone, and from there to William Denny and Brothers, Dumbarton, where she underwent repairs which kept her out of service for a month.[4]

Upon the completion of repairs, Onward had the distinction of carrying the very first motor car across the English Channel.[4]

Under her original owners, the vessel saw service in World War I. Primarily, she was used as a troop transport ship for the British Expeditionary Force, on her regular route between Folkstone and Boulogne.

On 24 September 1918, she caught fire in Folkestone Harbour. The fire took hold, and was only contained by the opening of her seacocks in order to prevent the pier catching fire.[5] This resulted in the scuttling of the vessel; she turned over onto her port side, and was subsequently hauled upright by a team of five steam locomotives in harness.[5][6]

The hull of Onward was purchased by the Isle of Man Steam Packet Company in 1920 and rebuilt as Mona's Isle,[1] the fourth ship in the company's history to be so named.

Of eleven Steam Packet ships either purchased or chartered by the Admiralty during the Great War, only four returned to service with the Company after the cessation of hostilities, and consequently, new ships were going to be needed to handle the resumption of peacetime traffic. However, industry as a whole was in a disorganised and seriously run-down state after the challenges of the war years, and new vessels could not be built in time for the tourist influx of 1919.

The Company compromised, and starting with the purchase of Mona, they set about redressing their wartime losses. The purchase of Onward was part of this policy, and upon purchase the vessel was renamed Mona's Isle. She is the only Steam Packet Company ship to carry the Manx flag down the River Thames, for she was transferred to the Company when in Limehouse in the Port of London.

Mona's Isle saw service to the various ports then served by the Isle of Man Steam Packet Company, but was mainly used on summer work between Douglas and the company's Irish services to Belfast and Dublin

On Monday, 29 June 1936, she struck the Devil's Rock in Balscadden Bay, but was able to reach Dublin safely. She was taking on water and could not complete the return journey until repaired.

The Mona's Isle was considered an old ship, being 34 years old when war broke out in 1939. Like other Steam Packet ships, she was fitted out as an ABV - an Armoured Boarding Vessel - and for the first few months of the war her life was largely uneventful. This was set to change, as with the plight of the British Expeditionary Force becoming all too apparent, Mona's Isle joined no less than seven of her Steam Packet sisters, and made passage to Dunkirk.

According to Admiralty records, Mona's Isle was the first ship to leave Dover for Dunkirk[7] when Operation Dynamo began, although an exception being HMS Wolsey, a destroyer which was to act as a radio link ship.

Mona's Isle departed Dover at 21:00hrs on 27 May 1940.[7] The journey across the Channel during the hours of darkness was uneventful, and she arrived at Dunkirk at approximately midnight. Once secured at the quayside, Mona's Isle embarked 1,420 troops[7] and she left at first light the next morning.

Returning by Route Z, the Mona's Isle came under fire from German shore batteries from the French coast. Many shells exploded close to the ship sending plumes of white water into the air and with water spraying over the decks. A number of shells failed to explode as they hit the ship, but one fell aft and smashed the rudder. The Mona's Isle was a triple screw vessel, so by careful use of port and starboard engines, the ship was able to reach the safety of Dover, but not before a Bf 109 had strafed the ship a couple of times killing 23 and wounding 60 others. Using the same route, two coasters, the Sequacity and the Yewdale headed for Dunkirk, and along the French coast they both came in for the same treatment. Sequacity suffered two direct hits, one into her starboard side, the other into the engine room and she started to sink, the crew being rescued by the Yewdale, which aborted the mission and returned to Dover.

However Mona's Isle reached Dover safely, escorted by the destroyer HMS Windsor. The mission had taken nearly 15 hours and she was recorded as the first ship to complete a round trip during the evacuation.[7]

Two awards were later made to members of the ship's company or their part in the action. The Commanding Officer, Cdr J.C.K. Dowding RNR, received the Distinguished Service Order. Petty Officer L.B. Kearley-Pope, RNR, was awarded the Distinguished Service Medal. He had remained at a 12-pounder gun despite multiple wounds and he took a great risk in coming out of cover to close the cordite boxes. There were casualties among the gun's crew, but the PO continued to carry out his duties until the ship berthed six hours later. Cdr Dowding was later promoted to Captain. He was Commodore of the ill-fated Convoy PQ 17 to Russia, which was forced to scatter and suffered heavy losses in July 1942.

Mona's Isle made a second round trip to Dunkirk, bringing out a further 1,200 troops, and bringing her total to 2,634. The rest of her war service was spent either as an Armoured Boarding Vessel or an accommodation ship. She was transferred to the Tyne in 1941, where she was three times involved in collisions, one of which did extensive damage and sent her to dock for three months.

Once on the Tyne, where she lent support to the AA defences of coastal convoys, Mona's Isle gave valuable assistance on two occasions to merchantmen that had been bombed, in one case rescuing 32 survivors. After D-Day she worked on cross-Channel transport duties until June 1945, when she was then chartered by the Ministry of War Transport before she was finally released from her war service in March 1946.

Mona's Isle in the Mersey. 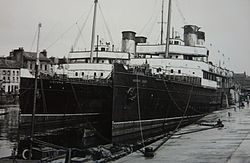 Victoria (left) and Mona's Isle (right), during their winter lay-up at the Tongue, Douglas, Isle of Man

After her war service, Mona's Isle returned to her duties within the Steam Packet fleet. She worked for a further two years, until with the introduction of the "Six Sisters", she was withdrawn from service.

After a thoroughly eventful life spanning 43 years, Mona's Isle was broken up at Milford Haven in 1948.