The Saab 29, popularly called Flygande tunnan ("The Flying Barrel"), was a Swedish fighter designed and manufactured by Saab in the 1950s. It was Sweden's second turbojet-powered combat aircraft, the first being the Saab 21R. Despite its rotund appearance, the J 29 was fast and agile, serving effectively in both fighter and fighter-bomber roles into the 1970s.

In the aftermath of the Second World War, it was decided that Sweden needed a strong air defense built around the newly developed jet propulsion technology. Project "JxR" began in the final months of 1945 with two proposals from the SAAB design team led by Lars Brising. The first, codenamed R101, was a cigar-shaped aircraft somewhat similar to the American Lockheed P-80 Shooting Star. The winning design however was the "barrel" design, codenamed R 1001, which proved to be both faster and more agile.

The original R 1001 was designed around a mostly straight wing, but after the Swedish engineers had obtained some German research data on swept-wing designs, the prototype was altered to incorporate a 25 degree sweep, first tested on a modified Saab Safir (designated Saab 201). A member of the Saab engineering team had been allowed to review German aeronautical documents stored in Switzerland. These files captured by the Americans in 1945 clearly indicated delta and swept-wing designs had the effect of "reducing drag dramatically as the aircraft approached the sound barrier."[1] The SAAB 29 prototype flew for the first time on 1 September 1948. It was a small, chubby aircraft with a single central air intake, a bubble cockpit and a very thin swept-back wing. The test pilot was an Englishman, Robert A. 'Bob' Moore, who went on to become the first managing director of Saab GB Ltd, UK, set up in 1960.

Moore described the aircraft as "on the ground an ugly duckling – in the air, a swift." Because of its rotund appearance, The Saab J 29 was quickly nicknamed "Flygande Tunnan" ("The Flying Barrel"). A total of 661 Tunnans were built from 1950 to 1956, making it the largest production run for any SAAB aircraft.

The crash record in early service was poor, mainly due to the inexperience with swept-winged aircraft and the lack of a two seat, dual control Tunnan trainer variant: this meant that Swedish fighter pilots could only be trained using two seat variants of the de Havilland Vampire (a straight-winged jet), before going solo in a Tunnan. The fighter version was retired from active service in 1965, but some aircraft were used for target towing up to 1974. The last official military flight was completed in August 1976 at the Swedish Air Force's 50th anniversary air show. A total of 30 Tunnans were sold to Austria in 1961 where they remained in service until 1972.

The Tunnan was the first Swedish jet aircraft to fight in combat. In 1961, five J 29Bs were stationed in the Republic of Congo for a UN peacekeeping mission (ONUC), organized as the F 22 Wing of the Swedish Air Force. It was reinforced by four more J 29Bs and two S 29C photo reconnaissance Tunnans in 1962. Most of the missions involved attacking ground targets with internal cannons as well as unguided rockets. No aircraft were lost in action despite large amounts of ground fire. Consensus of the crews and foreign observers was that the Tunnan's capabilities were exceptional.[3][4] (Their secessionist adversaries used a few Fouga Magisters and other aircraft with relatively poor air combat capabilities.) The only aircraft lost was by a high-ranking officer who made a trial-run and crashed during an aborted takeoff. When ONUC was terminated in 1964, some of the Swedish aircraft were destroyed at their base, since they were no longer needed at home and the cost of taking them all back was deemed excessive.

J 29
Four prototypes built in 1949–1950.
J 29A
Fighter, 224 built from 1951 to 1954; later series had wing-mounted dive brakes moved to the fuselage, ahead of the main landing gear doors.
J 29B
Fighter, 332 built 1953–1955; featured 50% larger fuel capacity and underwing hardpoints to carry bombs, rockets and drop-tanks.
A 29B
Same aircraft as the J 29B, when serving with attack units.
S 29C
Reconnaissance ("S" was derived from Spaning; scouting or reconnaissance in Swedish), 76 built from 1954 through 1956; five cameras mounted in a modified nose (no armament was carried). Later modified with the improved wing design introduced on the J 29E.
J 29D
Single prototype to test Ghost RM 2A turbojet with 27.5 kN (2,800 kgp / 6,175 lbf) afterburning thrust; project abandoned in 1961.
J 29E
Fighter, 29 built in 1955; introduced an improved wing design with a leading edge dogtooth to increase the critical Mach number.
J 29F
Fighter, 308 aircraft converted from available stocks of B and E model airframes from 1954 to 1956; featured the afterburning Ghost and dog-tooth wing; all remaining aircraft were further modified in 1963 to carry a pair of US-designed AIM-9B Sidewinder heat-seeking air-to-air missiles, built by SAAB under license as the "Rb 24." 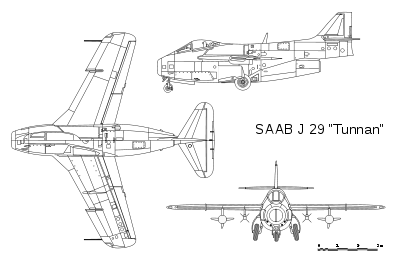 Data from The Great Book of Fighters[5][6]

Retrieved from "https://military.wikia.org/wiki/Saab_29_Tunnan?oldid=4789962"
Community content is available under CC-BY-SA unless otherwise noted.