Sachsenhausen ("Saxon's Houses", German pronunciation: [zaksənˈhaʊzən]) or Sachsenhausen-Oranienburg was a Nazi concentration camp in Oranienburg, Germany, used primarily for political prisoners from 1936 to the end of the Third Reich in May 1945. After World War II, when Oranienburg was in the Soviet Occupation Zone, the structure was used as an NKVD special camp until 1950 (See NKVD special camp Nr. 7). The remaining buildings and grounds are now open to the public as a museum.

Sachsenhausen under the NSDAP[edit | edit source]

The camp was established in 1936. It was located 35 kilometres (22 mi) north of Berlin, which gave it a primary position among the German concentration camps: the administrative centre of all concentration camps was located in Oranienburg, and Sachsenhausen became a training centre for Schutzstaffel (SS) officers (who would often be sent to oversee other camps afterwards). Executions took place at Sachsenhausen, especially of Soviet prisoners of war. Among the prisoners, there was a "hierarchy": at the top, criminals (rapists, murderers), then Communists (red triangles), then homosexuals (pink triangles), Jehovah's Witnesses (purple triangles), and Jews (yellow triangles).[citation needed] During the earlier stages of the camp's existence the executions were done in a trench, either by shooting or by hanging. A large task force of prisoners was used from the camp to work in nearby brickworks to meet Albert Speer's vision of rebuilding Berlin.[1] Sachsenhausen was originally not intended as an extermination camp—instead, the systematic murder was conducted in camps to the east. In 1942 large numbers of Jewish inmates were relocated to Auschwitz. However the construction of a gas chamber and ovens by camp-commandant Anton Kaindl in March 1943[2] facilitated the means to kill larger numbers of prisoners.

The Main gate or Guard Tower "A", with its 8mm Maxim machine gun, the type used by the Germans in the trenches of World War I, housed the offices of the camp administration. On the front entrance gates to Sachsenhausen is the infamous slogan Arbeit Macht Frei ("work makes (you) free"). About 200,000 people passed through Sachsenhausen between 1936 and 1945. Anchoring the base of the triangular shaped thousand-acre site was the large Appellplatz, where tens of thousands of prisoners would line up for morning and evening roll call. Creating a semi circular configuration, were the barracks of custody zone I which fanned out from the base of the Appellplatz.[citation needed]

Sachsenhausen was intended to set a standard for other concentration camps, both in its design and the treatment of prisoners. The camp perimeter is, approximately, an equilateral triangle with a semi circular roll call area centered on the main entrance gate in the boundary running northeast to southwest. Barrack huts lay beyond the roll call area, radiating from the gate. The layout was intended to allow the machine gun post in the entrance gate to dominate the camp but in practice it was necessary to add additional watchtowers to the perimeter. The standard barrack layout was to have a central washing area and a separate room with toilet bowls and a right and left wing for overcrowded sleeping rooms.[citation needed]

There was an infirmary inside the southern angle of the perimeter and a camp prison within the eastern angle. There was also a camp kitchen and a camp laundry. The camp's capacity became inadequate and the camp was extended in 1938 by a new rectangular area (the "small camp") northeast of the entrance gate and the perimeter wall was altered to enclose it. There was an additional area (sonder lager) outside the main camp perimeter to the north; this was built in 1941 for special prisoners that the regime wished to isolate.[citation needed]

The camp was secure and there were few successful escapes. The perimeter consisted of a 3-metre-high (9.8 ft) stone wall on the outside. Within that there was a space that was patrolled by guards and dogs; it was bordered on the inside by a lethal electric fence; inside that was a gravel "death strip" forbidden to the prisoners. Any prisoner venturing onto the "death strip" would be shot by the guards without warning. Rewards such as extra leave were offered to guards who successfully shot and killed any prisoner who entered onto the death zone.[citation needed]

Sachsenhausen was the site of the largest counterfeiting operation ever. The Germans forced inmate artisans to produce forged American and British currency, as part of a plan to undermine the British and United States' economies, courtesy of Sicherheitsdienst (SD) chief Reinhard Heydrich. Over one billion pounds in counterfeit banknotes were recovered.[when?] The Germans introduced fake British £5, £10, £20 and £50 notes into circulation in 1943: the Bank of England never found them. Plans had been made to drop British pounds over London by plane.[3] Today, these notes are considered very valuable by collectors.

An industrial area, outside the western camp perimeter, contained SS workshops in which prisoners were forced to work; those unable to work had to stand to attention for the duration of the working day. Heinkel, the aircraft manufacturer, was a major user of Sachsenhausen labour, using between 6,000 and 8,000 prisoners on their He 177 bomber. Although official German reports claimed the prisoners were "working without fault", some of these aircraft crashed unexpectedly around Stalingrad and it is suspected that prisoners had sabotaged them.[4] Other firms included AEG and Siemens. Prisoners also worked in a brick factory, which some say was supposed to supply the building blocks for Hitler's dream city, Germania, which was to be the capital of the world once the Nazis took over.

Camp punishments could be harsh. Some would be required to assume the "Sachsenhausen salute" where a prisoner would squat with his arms outstretched in front. There was a marching strip around the perimeter of the roll call ground, where prisoners had to march over a variety of surfaces, to test military footwear; between 25 and 40 kilometres (16 and 25 mi) were covered each day. Prisoners assigned to the camp prison would be kept in isolation on poor rations and some would be suspended from posts by their wrists tied behind their backs (strappado). In cases such as attempted escape, there would be a public hanging in front of the assembled prisoners.

Some 30,000 inmates died there from exhaustion, disease, malnutrition, pneumonia, etc. due to the poor living conditions. Many were executed or died as the result of brutal medical experimentation. Over the course of its operation, over 100 Dutch resistance fighters were executed at Sachsenhausen. The Dutch subsequently[when?] sought the extradition from Czechoslovakia of Antonín Zápotocký, who became President of Czechoslovakia, for his alleged role in the murder of the Dutch during his time as a kapo at the camp. According to an article published on December 13, 2001 in The New York Times, "In the early years of the war the SS practiced methods of mass killing there that were later used in the Nazi death camps. Of the roughly 30,000 wartime victims at Sachsenhausen, most were Russian prisoners of war".[7][8]

Many women were among the inmates of Sachsenhausen and its subcamps. According to SS files, more than 2,000 women lived in Sachsenhausen, guarded by female SS staff (Aufseherin). Camp records show that there was one male SS soldier for every ten inmates and for every ten male SS there was a woman SS. Several subcamps for women were established in Berlin, including in Neukölln.

Towards the end of the war, 13,000 Red Army POWs arrived at Sachsenhausen. Over 10,000 were executed in the camp by being shot in the back of the neck through a hidden hole in a wall while being measured for a uniform. Their bodies were then burnt in a crematorium.

With the advance of the Red Army in the spring of 1945, Sachsenhausen was prepared for evacuation. On April 20–21, the camp's SS staff ordered 33,000 inmates on a forced march northeast. Most of the prisoners were physically exhausted and thousands did not survive this death march; those who collapsed en route were shot by the SS. On April 22, 1945, the camp's remaining 3,000 inmates, including 1,400 women were liberated by the Red Army and the Polish Army's 2nd Infantry Division.

Among those executed in "Station Z" were

The structure under the Soviets[edit | edit source]

In August 1945 the Soviet Special Camp No. 7 was moved to the area of the former concentration camp. Nazi functionaries were held in the camp, as were political prisoners and inmates sentenced by Soviet Military Tribunals.[14] By 1948, Sachsenhausen, now renamed "Special Camp No. 1", was the largest of three special camps in the Soviet Occupation Zone. The 60,000 people interned over five years included 6,000 German officers transferred from Western Allied camps.[15] Others were Nazi functionaries, anti-Communists and Russians, including Nazi collaborators.

One of the camp's commandants was Roman Rudenko,[16] the Soviet Chief Prosecutor at the Nuremberg Trials.

With the fall of the communist East Germany it was possible to do excavations in the former camps. At Sachsenhausen, the bodies of 12,500 victims were found, most were children, adolescents and elderly people.[17]

In 1956, the East German government established the site as a national memorial, which was inaugurated on 23 April 1961. The plans involved the removal of most of the original buildings and the construction of an obelisk, statue and meeting area, reflecting the outlook of the current government.

As of 2015[update], the site of the Sachsenhausen camp, at Strasse der Nationen 22 in Oranienburg, is open to the public as a museum and a memorial. Several buildings and structures survive or have been reconstructed, including guard towers, the camp entrance, crematory ovens and the camp barracks.

After German reunification, the camp was entrusted to a foundation that opened a museum on the site. The museum features artwork created by inmates and a 30-centimetre (12 in) high pile of gold teeth (extracted by the Germans from the prisoners), scale models of the camp, pictures, documents and other artifacts illustrating life in the camp. The administrative buildings from which the entire German concentration camp network was run have been preserved and can also be seen.

Following the discovery in 1990 of mass graves from the Soviet period, a separate museum has been opened documenting the camp's Soviet-era history, in the former Sonderlager.

The compound has been vandalized by Neo-Nazis several times. In September 1992, barracks 38 and 39 of the Jewish Museum were severely damaged in an arson attack. The perpetrators were arrested, and the barracks were reconstructed by 1997.[18]

Memorial statue at the base of the Obelisk – Sept 2010 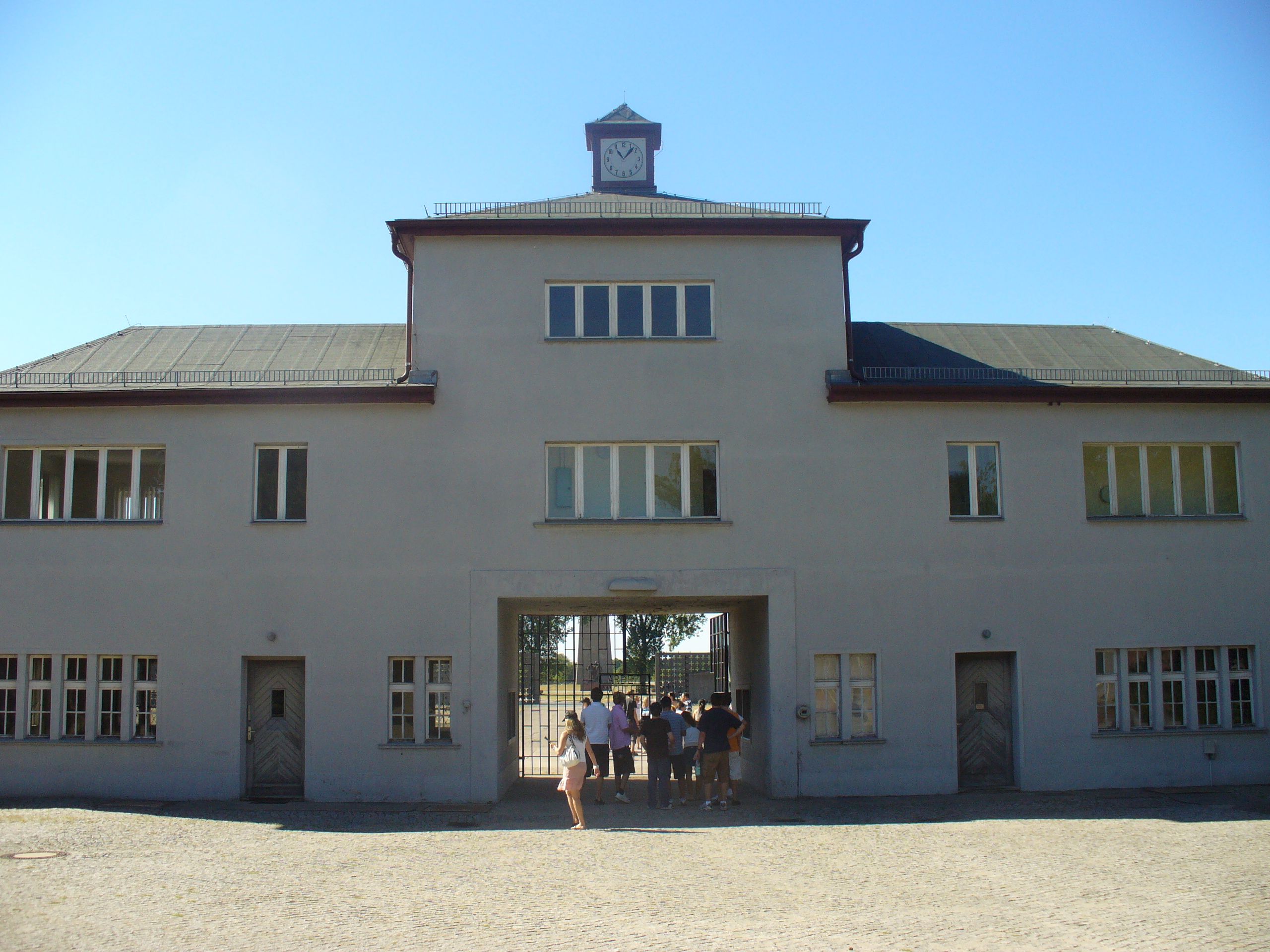 Main entrance, July 2006
SachsenTower.jpg
One of the perimeter watchtowers, May 2007
UniformSachsen.jpg
Prisoner's uniform. May 2007
Pathology Block over Mortuary Cellar 2007.jpg
Pathology Block over Mortuary Cellar used for storing bodies prior to cremation
Infirmary Barracks 2007.jpg
Infirmary Barracks, later used for medical experiments and now housing an exhibition.
SS Troop Barracks 2007.jpg
The green building beyond the entrance gate is the remnants of the SS troop barracks 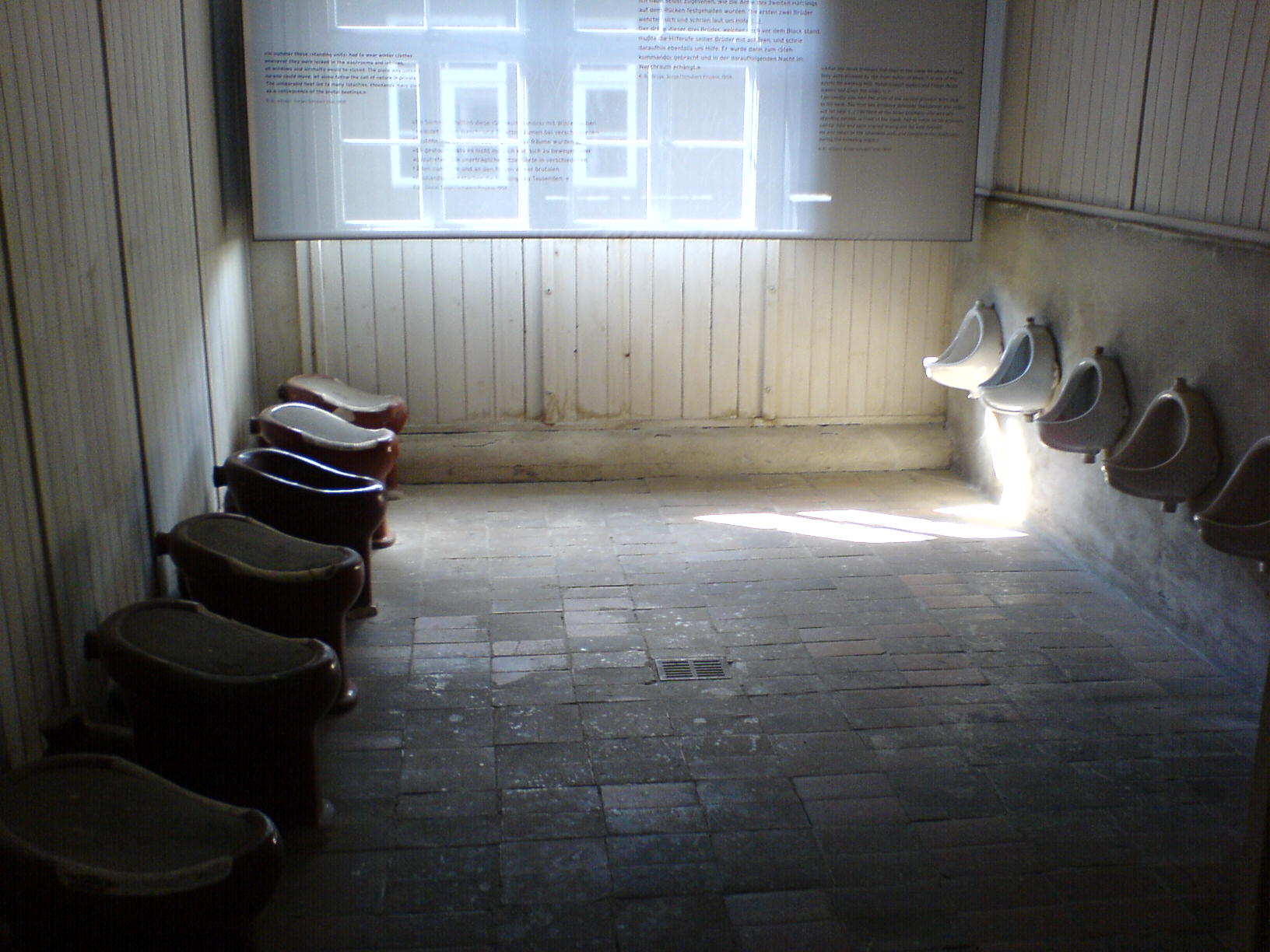 Toilet inside the barracks 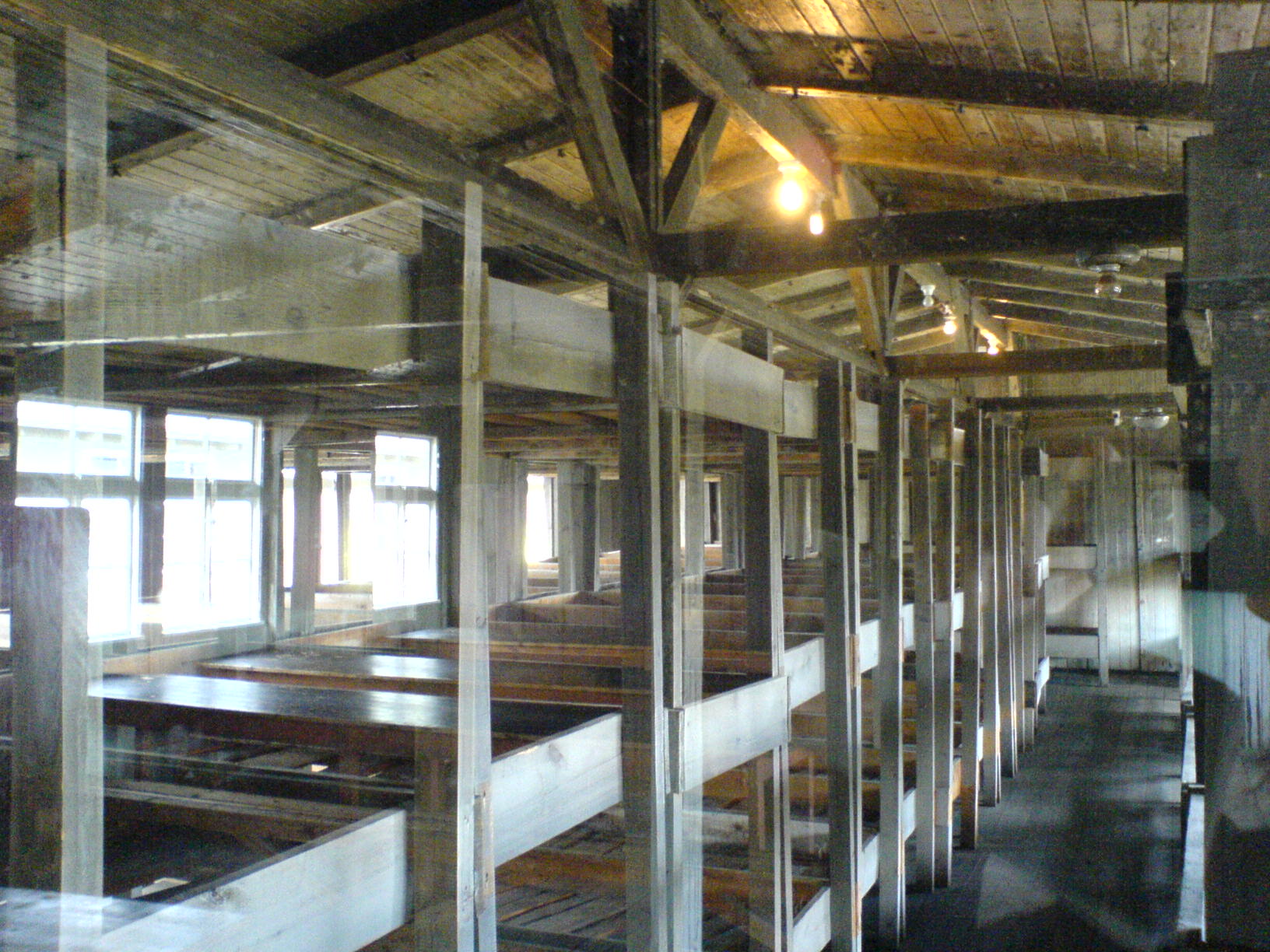 Bunk beds inside the barracks 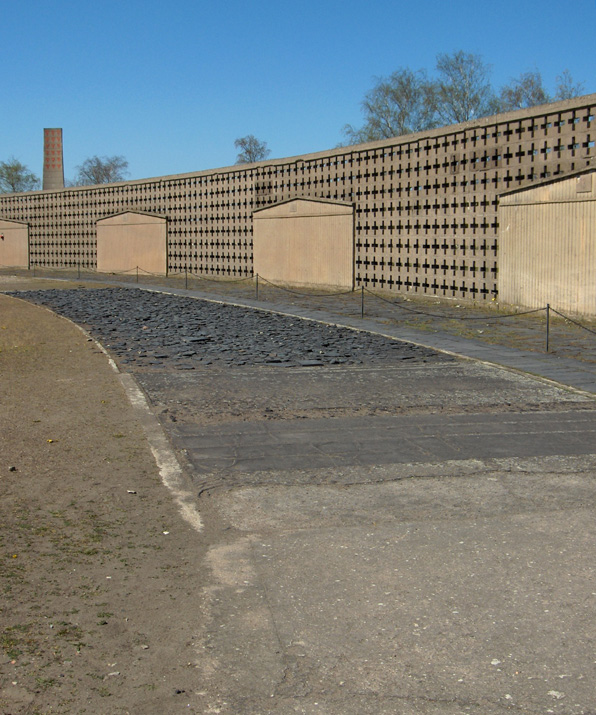 Retrieved from "https://military.wikia.org/wiki/Sachsenhausen_concentration_camp?oldid=4391499"
Community content is available under CC-BY-SA unless otherwise noted.