Military Wiki
Register
Don't have an account?
Sign In
Advertisement
in: Articles incorporating text from Wikipedia, History of Samoa, 1887 in Samoa,
and 21 more

The Samoan Crisis was a confrontation standoff between the United States, Imperial Germany and Great Britain from 1887–1889 over control of the Samoan Islands during the Samoan Civil War. The incident involved three American warships, USS Vandalia, USS Trenton and USS Nipsic and three German warships, SMS Adler, SMS Olga, and SMS Eber, keeping each other at bay over several months in Apia harbour, which was monitored by the British warship HMS Calliope. The standoff ended on 15 and 16 March when a cyclone wrecked all six warships in the harbour. Calliope was able to escape the harbour and survived the storm. Robert Louis Stevenson witnessed the storm and its aftermath at Apia and later wrote about what he saw.[1] The Samoan Civil War continued, involving Germany, United States and Britain, eventually resulting, via the Tripartite Convention of 1899, in the partition of the Samoan Islands into American Samoa and German Samoa.[2] 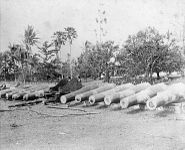 Salvaged guns from the wrecked American ships at Apia.

A view of the sunken USS Vandalia from the deck of USS Trenton.

Apia and the beach covered in driftwood and debris from the wrecked warships.

Illustrated London News for 27 April 1889; artist’s conception of HMS Calliope being cheered on by the crew of USS Trenton as Calliope escapes from Apia Harbour. Calliope actually passed to Trenton´s port.

A memorial at Mare Island Naval Yard for the Americans killed in the cyclone.

Wrecked ships in Apia Harbour. German gunboat SMS Eber is on the beach, the stern of USS Trenton is at right, with the sunken USS Vandalia alongside. SMS 'Adler is on her side in the center distance.

Another angle of the wrecked warships.