Adolph Saurer AG based in Arbon, Switzerland was a manufacturer of trucks and buses under the Saurer and Berna (beginning in 1929) brand names, active between 1903 and 1982. Their vehicles were widely used across mainland Europe, particularly in the interwar period.

In 1853 Franz Saurer (1806–1882) from Germany established an iron foundry for household goods near the Swiss town of Sankt Gallen. In 1863 he started production of Jacquard sewing machines in Arbon, from 1869 together with his sons as company associates of F. Saurer & Söhne. In 1896 his eldest surviving son Adolph Saurer (1841–1920) took over the company.

From 1896 Saurer also manufactured petrol engines and the next year Hippolyt Saurer initiated the production of an automobile run by a one-cylinder opposed-piston engine. In 1902 a first four-cylinder T-head engine model with touring car and sedan chassis was built.

From 1903 onwards Saurer concentrated on the production of commercial vehicles which soon gained a good reputation.

In 1929 Saurer acquired its Swiss rival, Motorwagenfabrik Berna AG of Olten, but the Berna name was allowed to continue, badging the very same Saurer models. In World War 2 a restructured type BT 4500 and 5 BHw of Saurer trucks were used to gas people in the Nazi [Chełmno extermination camp]. Extermination vans were adapted, when they went in for repair, to carry the optimum number of people who could be gassed in the time it took to drive them from Chelmno to the woods where they were disposed of in ovens. There was concern about the strain on the front axel if too many people were loaded to be gassed, but as piles of bodies were always closest to the doors there was no strain on the front axel.[1][2]

In 1951 Saurer and its Italian licensee, OM, reached an agreement by which Saurer would market in Switzerland OM's light and medium-weight trucks and buses, using Saurer-OM and Berna-OM badges. This was successful and lasted until Saurer closure.

In 1982 Daimler-Benz had acquired a major shareholding in NAW and soon took full control; and in a short time dropped Saurer, Berna and FBW brands, while using NAW premises to assemble heavy haulage versions of Mercedes-Benz trucks. Eventually NAW went into liquidation in early 2003. Last remain of the Saurer automotive activity in Arbon is the present [Fiat Powertrain Technologies engine research center, that up to 1990 had been the Saurer Motorenforschung Research&development Centre.

In 1995, Ernst Thomke, reputed Swiss Manager, took over the leadership of Saurer AG.Thomke led actively Saurer AG until 1996, when he retired to the direction of the Board until 1999. In his years he promulgated transparency at all levels, flexible working hours, optimized the production and refined accounting systems. In 1996, the group Saurer AG went back into financial results showing profits. More than half of the revenues originating from Schlafhorst, upon its positive restructuring.

Saurer also produced the YS-2 and YS-3 aero-engines, closely related to the Hispano-Suiza 12Y series of engines designed and built in France, to power the Doflug D-3802 and Doflug D-3803 fighters.

Since 2007, the conglomerate Saurer AG, which meanwhile had reached a worldwide leading status in textile machinery, has been integrated into the Oerlikon Corporation (see: Oerlikon Textile)

Also since 2007, the remaining Saurer AG automative part, "Graziano Trasmissioni", a manufacturer of gear, gear groups and complete transmission systems for agricultural, earth moving and special vehicles as well as for four wheel drive passenger cars and luxury sport cars has also been integrated into the Oerlikon Corporation.[3]

A Saurer trolleybus in Timişoara, 2005 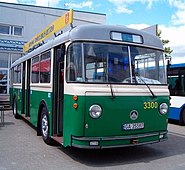 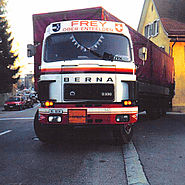 Saurer F006
Add a photo to this gallery

The Saurer F006 (also known as Saurer 288) and F007 were, apart from the Swiss Army cross-country trucks known as the (6-ton) Saurer 6DM and the (10-ton) Saurer 10DM, the last vehicle designs of the company. In the late 1970s the F006 design from Saurer in Arbon, Switzerland was intended as a successor to the Jeep for the Swiss Army. In addition, it was hoped that the vehicle would also be purchased by fire departments as well as become work vehicles for community structures, such as road maintenance operations, forest rangers, electric and water utilities, etc. Selling to private users (like the Mercedes G) was not addressed, but it would have been likely. The reason was that Monteverdi, the luxury car manufacturer, had put on display at the Geneva Motor Show 1979 the civilian version of the Saurer F006 Military vehicle which they called the 260Z. This was the 230th based on the Military design. The 260Z was not produced, however they created three prototypes, which are listed in the Monteverdi Museum in Binningen. While Monteverdi did not use the Saurer chassis they did produce two versions of a luxury SUV vehicle called the Monteverdi Safari/Sahara based on the International Harvester Scout vehicle lending credence to the idea that had the F006 been in production, a civilian version would have emerged.

Technology: It is the Saurer F006 turned into an off-road passenger vehicle with four-wheel drive. The concept was adopted by the automaker Monteverdi, improved by Berna engineering company of Olten, Switzerland. Saurer took over the production. The axles are from IHC Scout (Jeep I scout from International Harvester). The vehicle had a plastic body made of polyester. For power the drive-train was a 6-cylinder petrol engine from Volvo with an automatic transmission. Maximum speed was 100 km/h. Overall styling contrasted to the Mercedes G and Puch 230GE joint venture vehicle with the front turn signals mounted conventionally on the front of the vehicle (and not on the hood). The equipment installed in the front bumper parking lights can be turned by flicking the "Tarnlicht" switch (a multipurpose military switch for light dimming). The basic vehicle has a fixed open back cab. The loading / passenger seats are closed with a fast mountable / demountable plastic sheet at the rear including a military holder for a gas canister; a fixed structure is provided for use in case of fire.

Saurer in 1980 introduced the F006 and in 1982 it was tested by the War Technical Department of the Swiss Army which appreciated the off-road capability. However, the Puch 230GE was procured instead. Failure to secure the army production order meant that production of the vehicle for other potential users was not economically viable. In the end only the 24 prototypes were built, one of which remained in service until 1988, and was subsequently donated to the Saurer oldtimer club; the other remaining vehicles are privately owned.

Saurer F007: Simultaneously with the Saurer F006 the Saurer F007 was introduced in 1980 as a Pinzgauer High-Mobility All-Terrain Vehicle with similar versions available to the public. The F007 uses the same chassis and the same drive unit as the F006, however, unlike the F006 it does not have the cab behind the engine, but instead the engine compartment is internally located (as with many vans). It is therefore called a cab. Unlike the F006 the F007 has three windshield wiper blades instead of two, four headlights instead of two, and the front parking lights and turn signals are housed in the same headlamp shell. The gasoline tank filler neck is on the left side immediately behind the driver's door, and not as in the F006 on the right side between the rear and the rear wheel. The vehicle has a fixed cab which is open to the rear. The cargo area, passenger space is covered with a plastic sheet, including two plastic windows on each side. Again, this was based on the concept of the cab-over model 260 F by Monteverdi. For Swiss Army procurement, starting from 1982, SUV's in addition to dedicated military vehicles were prepared for testing. Here, too, the Swiss Army examined and appreciated the high-road tested prototypes of the F007, but did not buy the vehicle. The existing Saurer F007's are now privately owned.

Retrieved from "https://military.wikia.org/wiki/Saurer?oldid=4542900"
Community content is available under CC-BY-SA unless otherwise noted.