The Second Artillery Corps (SAC) (simplified Chinese: 第二炮兵部队; traditional Chinese: 第二砲兵部隊; pinyin: Dì èr pàobīng bùduì) is the strategic missile forces of the People's Republic of China. The SAC is the component of the People's Liberation Army that controls China's nuclear ballistic and conventional missiles. China's total nuclear arsenal size is estimated to range between 240 nuclear weapons[1][2] to as many as 3,000 warheads hidden within an extensive tunnel system referred to as an "underground great wall",[3] while retired Russian General Viktor Yesin estimates that China has 1,800 warheads, with 900 of them being deployed and the rest in reserve.[4] However, Yesin's claims appear to be dubious, due to a lack of available resources for a missile force of such size.[5][6] As of 2013, United States Intelligence estimates the Chinese ICBM arsenal to range between 50 and 75 land and sea based missiles.[7] The SAC comprises approximately 90,000-120,000 personnel and six ballistic missile brigades. The six brigades are independently deployed in different military regions throughout the country.

In the late 1980s, China was the world's third-largest nuclear power, possessing a small but credible nuclear deterrent force of approximately 100 to 400 nuclear weapons. Beginning in the late 1970s, China deployed a full range of nuclear weapons and acquired a nuclear second-strike capability. The nuclear forces were operated by the 100,000-person Strategic Missile Force, which was controlled directly by the General Staff Department.

China began developing nuclear weapons in the late 1950s with substantial Soviet assistance. When Sino-Soviet relations cooled in the late 1950s and early 1960s, the Soviet Union withheld plans and data for an atomic bomb, abrogated the agreement on transferring defense and nuclear technology, and began the withdrawal of Soviet advisers in 1960. Despite the termination of Soviet assistance, China committed itself to continue nuclear weapons development to break "the superpowers' monopoly on nuclear weapons," to ensure Chinese security against the Soviet and United States threats, and to increase Chinese prestige and power internationally.

In the 1970s the nuclear weapons program saw the development of MRBM, IRBM and ICBMs and marked the beginning of a deterrent force. China continued MRBM deployment, began deploying the Dongfeng-3 IRBM and successfully tested and commenced deployment of the Dongfeng-4 (CSS-4) limited-range ICBM.

By 1980 China had overcome the slowdown in nuclear development caused by the Cultural Revolution and had successes in its strategic weapons program. In 1980 China successfully test launched its full-range ICBM, the Dongfeng-5 (CCS-4); the missile flew from central China to the Western Pacific, where it was recovered by a naval task force. The Dongfeng-5 possessed the capability to hit targets in the western Soviet Union and the United States. In 1981 China launched three satellites into space orbit from a single launch vehicle, indicating that China might possess the technology to develop multiple independently targetable reentry vehicles (MIRVs). China also launched the Xia-class SSBN in 1981, and the next year it conducted its first successful test launch of the CSS-NX-4 submarine-launched ballistic missile. In addition to the development of a sea-based nuclear force, China began considering the development of tactical nuclear weapons. PLA exercises featured the simulated use of tactical nuclear weapons in offensive and defensive situations beginning in 1982. Reports of Chinese possession of tactical nuclear weapons had remained unconfirmed in 1987.

In 1986 China possessed a credible deterrent force with land, sea and air elements. Land-based forces included ICBMs, IRBMs, and MRBMs. The sea-based strategic force consisted of SSBNs. The Air Force's bombers were capable of delivering nuclear bombs but would be unlikely to penetrate the sophisticated air defenses of modern military powers.

China's nuclear forces, in combination with the PLA's conventional forces, served to deter both nuclear and conventional attacks on the Chinese lands. Chinese leaders pledged to not use nuclear weapons first (no first use), but pledged to absolutely counter-attack with nuclear weapons if nuclear weapons are used against China. China envisioned retaliation against strategic and tactical attacks and would probably strike countervalue rather than counterforce targets. The combination of China's few nuclear weapons and technological factors such as range, accuracy, and response time limited the effectiveness of nuclear strikes against counterforce targets. China has been seeking to increase the credibility of its nuclear retaliatory capability by dispersing and concealing its nuclear forces in difficult terrain, improving their mobility, and hardening its missile silos.

The CJ-10 long-range cruise missile made its first public appearance during the military parade on the 60th Anniversary of the People's Republic of China; the CJ-10 represents the next generation in rocket weapons technology in the PLA. 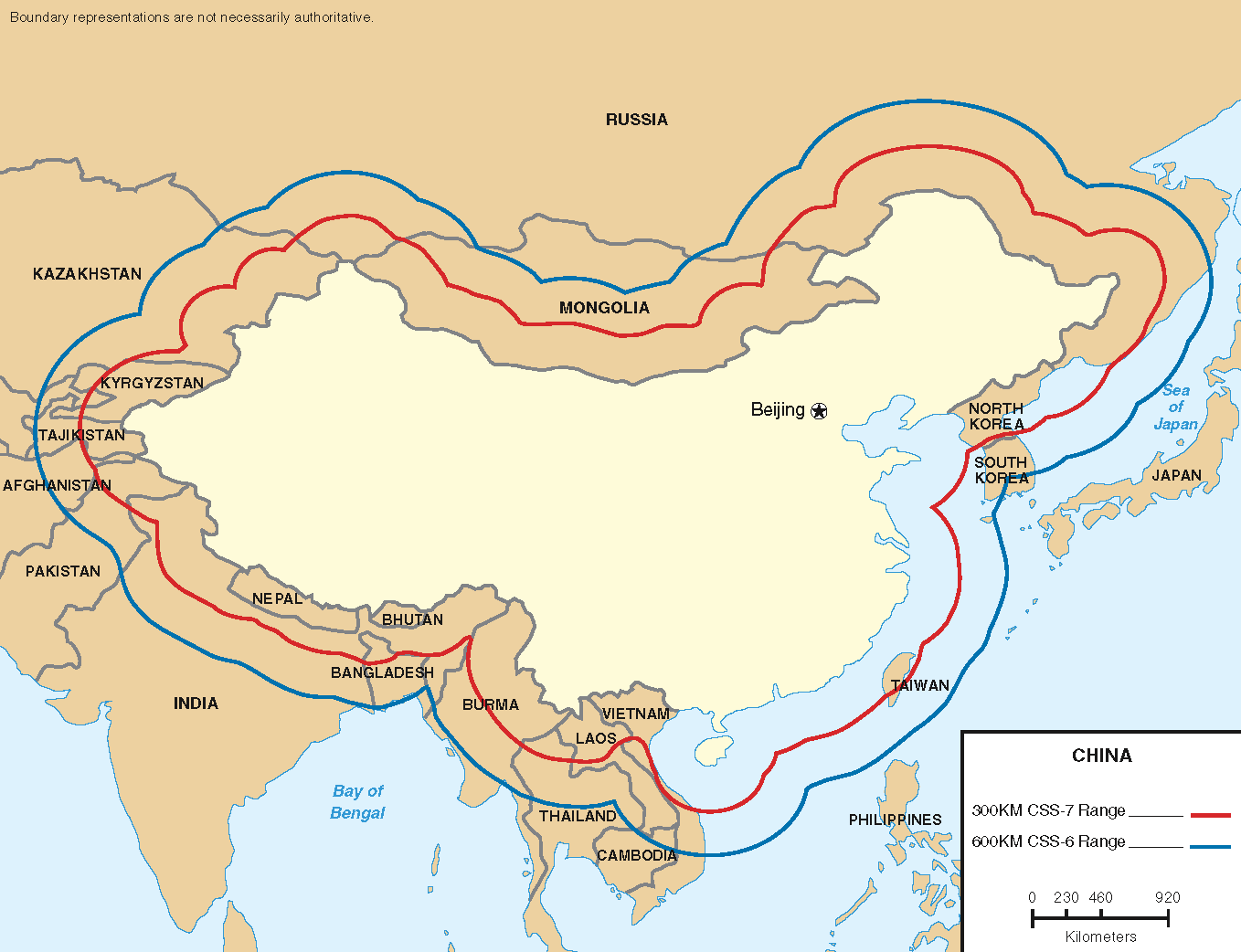 Medium and intercontinental range ballistic missiles. Note: China currently is capable of targeting its nuclear forces throughout the region and most of the world. Newer systems, such as the DF-31, DF-31A, and JL-2, will give China a more survivable nuclear force.
Add a photo to this gallery

Retrieved from "https://military.wikia.org/wiki/Second_Artillery_Corps?oldid=4781768"
Community content is available under CC-BY-SA unless otherwise noted.