Origin, World War 2 and the BushwarEdit

From the first Anti-Aircraft unit in 1939, Cape Town was no doubt the home of the Anti-Aircraft gunner. It became increasingly more evident that the Anti-Aircraft School/10 Anti-Aircraft Regiment, being situated at the southernmost centre of South Africa, lost out on valuable experience by not being able to regularly participate in integrated training with other South African Defence force fighting units. It was then decided to move the unit to Kimberley, and at the end of 1990, the whole unit with its personnel and equipment moved to Kimberley.

Air Defence Artillery in the SANDF after 1994Edit

The Army's reorganisation after the creation of the new South African National Defence Force, was lengthy. Corps were restructured with Regular and Reserve Regiments under command. The so-called “Type Formations” were established which assumed responsibility for the provisioning of combat-ready forces to be employed under the direction of Joint Operations Division.

The South African Air Force's Air Defence Artillery Group was mainly responsible for air field defense, was also disbanded at this stage and responsibility for overall Air Defence was centralized under this new Formation.[3][4] Equipment was transferred to the new Formation.

The South African Gunner publication states that during 1999, the Directorate Anti-Aircraft became the South African Air Defence Artillery Formation, with a colonel as officer commanding. Later a Brigadier General was appointed as the General Officer Commanding of two Regular Force units and four Reserve units. The SA ADA Formation was founded on January 1, 1999.

With effect from 1 January 2015, Col G.S. Hlongwa was promoted to the rank of Brigadier General in the post of GOC ADA Formation,[6] taking over from Brig Gen Mbuli who has been promoted to Maj Gen and appointed to the post of Chief Director Defense Acquisition Material.[7]

A history of air defence in South Africa is in the process of being compiled. This history will be authored by Col (Rtd) Lionel Crook in conjunction with the SA Army Reserves and the Formation. It is estimated that this history will take three years to compile.[8]

The Air Defence reserve regiments are the 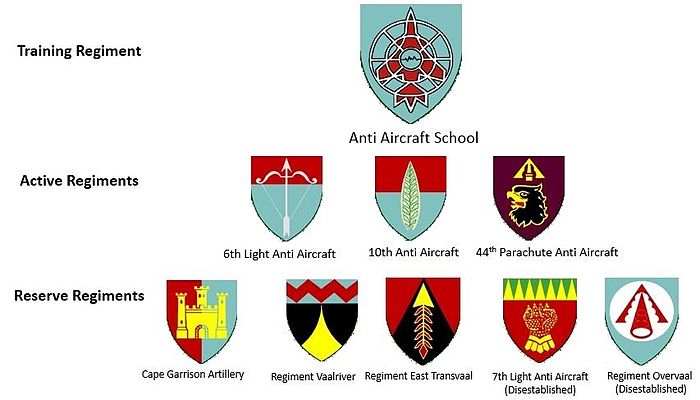 Due to a shortage of regular infantry, both 4 Artillery Regiment and 10 Air Defence Regiment have recently[when?] provided gunners deployed in a secondary role as line infantry in the central African region on peacekeeping duties. 10 Anti-Aircraft Regiment also provided three Batteries for external deployment in Burundi. The first Battery deployed was 102 Battery under command of Major L. Puckree. After 6 months, 101 Battery relieved them in Burundi under Command of Major S.G. Hlongwa. 103 Battery relieved 101 Battery in Burundi. After 18 months of external deployment the Regiment went back to its normal activities.

January 1999, different batteries within the Air Defence Artillery were deployed at Macadamia in Mpumalanga, Lesotho border and KwaZulu Natal.

In 2006, Air Defence Artillery sent two Batteries to Pondrift on the Zimbabwe border for border patrols.

The Formation uses the following equipment, among others:

Four Thutlwa systems were ordered in 1996 under Project Bioskoop and delivered by 2006. The Thutlwa is a highly mobile solid state L-band 2D surveillance radar designed to provide early warning to air defence artillery troops in the field. It is a fully autonomous armoured system with self-contained power plant packaged on a Spanish-designed Kynos Aljaba 8x8 (“Skimmel” in SANDF parlance) truck, and is capable of being fully operational within 10 minutes of arrival at the deployment site. The system also provides for a combined air picture derived from primary radar and IFF (identification, friend or foe), as well as a command and control system for effective air defence control. The high mobility nature of the system, which is transported on an all-terrain 8x8 transporter, coupled to the battlefield-specific local warning sensor design, make the system a pivotal element of the South African Army Ground-based Air Defence System. It is said to be able to track up to 100 targets simultaneously to a range of 120 km. The mast is 12m tall.

German defence company Rheinmetall AG will be responsible for the modernisation of this system, which will include logistics and training services scheduled for completion by 2017. The company is represented in South Africa by Rheinmetall Denel Munitions, with State owned Denel, a 49% shareholder. The contract will see Oerlikon Skyshield fire control systems being supplied. A number of these guns will be retrofitted with upgrade kits to accommodate Rheinmetall’s state-of-the-art Ahead airburst ammunition. The Skyshield technology will enable the SANDF to protect sensitive installations such as the Houses of Parliament, power plants, stadiums and other critical and civilian assets from a wide array of aerial threats, including asymmetric terrorist-type attacks. Skyshield air defence systems can be easily transported and can be deployed anywhere, depending on a evolving threat situation.

Retrieved from "https://military.wikia.org/wiki/South_African_Army_Air_Defence_Artillery_Formation?oldid=4688172"
Community content is available under CC-BY-SA unless otherwise noted.