This article is about the air force rank. For the francophone army rank sometimes translated as squadron leader, see chef d'escadron.

Squadron leader (Sqn Ldr in the RAF and IAF; SQNLDR in the RAAF and RNZAF; formerly sometimes S/L in all services) is a commissioned rank in the Royal Air Force[1] and the air forces of many countries which have historical British influence. It is also sometimes used as the English translation of an equivalent rank in countries which have a non-English air force-specific rank structure. In these cases a squadron leader ranks above flight lieutenant and immediately below wing commander.

It has a NATO ranking code of OF-3, equivalent to a lieutenant-commander in the Royal Navy or a major in the British Army or the Royal Marines.

The rank originated in the British Royal Air Force and was adopted by several other air forces which use, or used, the RAF rank system.

On 1 April 1918, the newly created RAF adopted its officer rank titles from the British Army, with Royal Naval Air Service lieutenant commanders and Royal Flying Corps majors becoming majors in the RAF. In response to the proposal that the RAF should use its own rank titles, it was suggested that the RAF might use the Royal Navy's officer ranks, with the word "air" inserted before the naval rank title. For example, the rank that later became squadron leader would have been air lieutenant commander. However, the Admiralty objected to this modification of their rank titles. The rank title squadron leader was chosen as squadrons were typically led by RAF majors and the term squadron commander had been used in the Royal Naval Air Service. The rank of squadron leader has been used continuously since 1 August 1919.

From 1 April 1918 to 31 July 1919, the RAF used major as the equivalent rank to squadron leader. Royal Naval Air Service lieutenant-commanders and Royal Flying Corps majors on 31 March 1918 became RAF majors on 1 April 1918. On 31 August 1919, the RAF rank of major was superseded by squadron leader which has remained in continuous usage ever since.

The rank squadron leader is the first senior officer rank within the RAF. 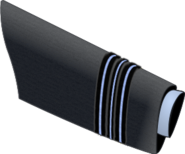 An RAF squadron leader's sleeve on No.1 service dress uniform
Add a photo to this gallery

The Royal Canadian Air Force (RCAF) used the rank until the unification of the Canadian Forces in 1968, when army-type rank titles were adopted. Canadian squadron leaders were retitled as majors. In official French Canadian usage, a squadron leader's rank title was commandant d'aviation. The Chilean Air Force equivalent rank, in Chilean Spanish, is comandante de escuadrilla or squadron commander. 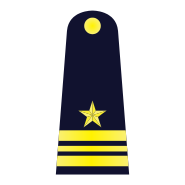 A PAF squadron-leader's shoulder rank insignia.
Add a photo to this gallery

In the British Household Cavalry and Royal Armoured Corps, "squadron leader" is the title (but not the rank) often given to the commander of a squadron (company) of armoured fighting vehicles. The squadron leader is usually a major, although in the Second World War the post was often held by a captain.

The rank has been borrowed in science fiction including the Star Wars films and its extended universe of literature and comics, though (at least in the Star Wars franchise) more often as the title and\or callsign of the leader of a starfighter squadron, irrespective of rank (similar to the aforementioned RAC usage; see flight leader), and usually with the word "squadron" replaced by the name of the squadron, e.g. red leader for the commander of Red Squadron, and infrequently as an actual rank. For the most part, this is just another example of common depiction of starfighter forces in most works featuring such craft as closely paralleling contemporary (at the time the work in question was produced) real-world air forces in almost all aspects.

Retrieved from "https://military.wikia.org/wiki/Squadron_leader?oldid=4544322"
Community content is available under CC-BY-SA unless otherwise noted.