Potocki was the son of Rotmistrz Andrzej Potocki and Zofia Piasecka and became father to Hetman Feliks Kazimierz Potocki and Hetman Andrzej Potocki. Initially a lukewarm member of the Polish Reformed Church, under the influence of Jesuits and his first wife he converted from Calvinism to Catholicism. Potocki was married to Zofia Kalinowska and Anna Mohyła.

He fought inter alia in the Battle of Cecora in 1620 and the Battle of Chocim in 1621. In 1654, Potocki was defeated at the Battle of Gródek Jagielloński by the Russians and Cossacks. Soon after, during "The Deluge", he surrendered to Swedish troops. Later he joined the Tyszowce Confederation and fought on the side of King Jan II Kazimierz against Sweden. He defeated the Cossack and Russian army at the Battle of Ochmatów in 1655. In 1660, together with Hetman Jerzy Sebastian Lubomirski, he stopped the Russian army led by V.B. Shriemietiev and forced them to surrender at the at Cudnów.

From 1665 to 1666, Potocki fought on the side of the King, against the Lubomirski Rokosz. 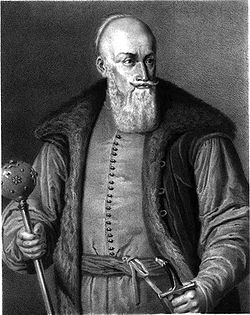 Retrieved from "https://military.wikia.org/wiki/Stanisław_%22Rewera%22_Potocki?oldid=5401406"
Community content is available under CC-BY-SA unless otherwise noted.