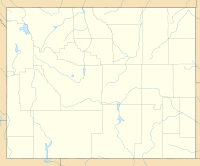 The station became operational with the activation of the 731st Radar Squadron (SAGE) on 1 December 1960, feeding data to DC-19 at Minot AFB, North Dakota. Operational status was delayed at Sundance AFS to allow testing to determine if atomic energy could be used to produce sufficient power to operate a radar station. A Portable Medium 1 (PM-1) transportable nuclear power plant developed by the US Army Nuclear Power Program was designed and installed on the site. The tests succeeded, and the site became operational in 1962 with the activation of AN/FPS-7C search radar and the AN/FPS-6 and AN/FPS-26 height-finder radars as the United States' first nuclear-powered radars. The radar squadron provided information to the SAGE Direction Center where it was analyzed to determine range, direction, altitude, and speed, and to evaluate whether aircraft were friendly or hostile.

The radars were operated until 1968 when Air Defense Command closed the station as part of a draw down of assets and budget reductions. The PM-1 plant was operated by Air Force, Army and Navy personnel, and it produced electricity for 4,101 hours without incident. It was dismantled after the site was inactivated. The reactor site remains fenced, marked as "US Government Property, No Trespassing".

Today, what was Sundance AFS is part of a ski area called "Vista West" What remains of undeveloped parts of the radar station are abandoned, the buildings severely deteriorated.

Retrieved from "https://military.wikia.org/wiki/Sundance_Air_Force_Station?oldid=2296705"
Community content is available under CC-BY-SA unless otherwise noted.