Military Wiki
Register
Don't have an account?
Sign In
Advertisement
in: Articles incorporating text from Wikipedia, Buildings and structures in Toronto, Cold War history of Canada,
and 2 more

The Supply Depot is a large warehouse located at Downsview Park in Toronto, Ontario, Canada.

The former military structure—built to withstand a nuclear attack—is today used as a farmer's market, film studio, and venue for the Toronto Roller Derby.

Entering the Supply Depot after a nuclear attack

The decontamination centre was underground near the office building

Individuals would shower and dress in clean clothing 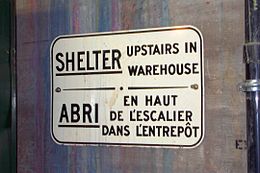 Then join others in the Supply Depot's bomb shelter

In 1952, the Canadian federal government acquired an airfield and several buildings and complexes located in the north Toronto neighbourhood of Downsview. A de Havilland Canada aircraft production facility was already located there, and the site would eventually become Canadian Forces Base Downsview.[1]

Several new buildings were constructed, including a massive warehouse used for storage and shipping. The "Supply Depot", completed in 1954, consisted of a one-story 81,470 m2 (876,900 sq ft) warehouse with an adjoining two-story office building.[1]

The Depot's location was ideal for shipping and receiving, with a Canadian National Railway mainline along the building's east side, and a spur-line connected to the north side. The newly constructed Ontario Highway 401 was a short distance south.[1]

The building was commonly referred to as the Supply Depot, though de Havilland named it "Building 151" in accordance with a numbering system they used. The Department of National Defence adopted this and officially named the structure Building 151.[1] The Treasury Board of Canada later referred to the building as "Supply Depot #1".[2]

The building became the central supply location for the Canadian military, and contained everything from screws and nails, to aircraft engines and wings.[3] The main floor was so vast that workers moving from station to station rode bicycles.[4]

When CFB Downsview closed in 1996, a portion of the former base—including the Supply Depot—became part of Downsview Park, the first national urban park in Canada. In 1998, the Supply Depot became one of 11 properties at the site listed on a municipal heritage inventory.[1]

The Supply Depot is a unique example of Cold War military construction in Canada, with heavily reinforced concrete used to create a fortress-like structure designed to survive a nuclear blast.[1] The walls are 1.5 ft (0.46 m) thick, and the flat roof is a 2 ft (0.61 m) thick slab of exposed concrete supported by columns spaced 40 ft (12 m) apart.[1][3][5]

On the building's south side is a door leading to a "Decontamination Centre", where individuals could enter the Supply Depot following a nuclear attack. The heavily-reinforced building also contained a bomb shelter.[7]

An architectural review from 2009 wrote, "the building was constructed during the period of Cold War and reflects the uncertain mood of the time with its tough envelope and back-up systems".[3]:56

The Supply Depot is used as a farmer's market and movie studio. Doors Open Toronto tours have also been conducted there. Since mid-2011, Toronto Roller Derby has played its home games in the south end of the building, known as The Bunker,[8][9] including its hosting of the inaugural Roller Derby World Cup in 2011.[10]