Tank desant (Russian: танковый десант, tankovyy desant) is a military combined arms tactic, where infantry soldiers, called tankodesantniki, ride into an attack on tanks, then dismount to fight on foot in the final phase of the assault. Desant (from the French language: descendre, "to disembark") is a Russian general term for airborne or parachute drops and naval infantry amphibious landings operations.

The tactic was used as an expedient by the Soviet Red Army during World War II. Tank desant troops (tankodesantniki) were infantry trained in the tactic in order to offer small-arms support in suppression of enemy anti-tank weapons or enemy infantry using anti-tank grenades. After the war, T-55 and T-62 tanks were built with hand-holds for this purpose. In northern areas during winter, similar tactics were used by Soviet infantry riding the skids of aerosani or towed behind them on skis. Nowadays, this tactic is very rare in well-equipped armed forces, with troops riding in armored personnel carriers or infantry fighting vehicles.

The use of tank desant was only prescribed within the first kilometer of the forward edge of the combat area for only the simplest of tactical mission objectives, since the circumstances would be difficult for the troops engaged.[2]

Riding on tanks during actual combat is very dangerous. Tank riders are very vulnerable to machine gun and high explosive fire, and the high silhouette of most tanks would draw enemy fire. Smoke and covering fire may be used to reduce the hazards. Tank riding is mostly used when troops need to move faster than is possible on foot and there is a shortage of motor transport or armoured personnel carriers.

Usually, the infantry and their heavy weapons were assigned to specific tanks well before the execution of the mission. This allowed the infantry to become familiar with the tanks and train with the tank crews. Support platforms for the heavy weapons were sometimes attached to the tanks to allow firing on the move. Ropes were attached to provide hand-holds for the infantry. The number of infantry assigned to a tank depended on the class of the tank; the usual numbers were:[2]

Tank desant would be used in such a way as to ensure surprise, approaching during a snow storm or mist or employing either smoke grenades or a smoke screen prepared by sappers or laid down by artillery.

Today, tank desant is considered a wasteful and human-costly improvisation, which, in the opinion of some writers, was adopted by the Red Army because they failed to appreciate the problem of tank–infantry co-operation.[3] However, this is not supported by historical analysis, and there is evidence that tank desant was used as early as 1937 during the Spanish Civil War. On 13 October, during the Aragon Front advance in the area of the Fuentes de Ebro, the 1st Independent Tank Regiment (Republican Army), using BT-5 tanks, attached to the 15th International Brigade, conducted a tank-desant mission with the attached 24th Infantry Battalion of the Spanish army (24ta de Voluntarios, commanded by Captain Aquilla). But lack of coordination and communication between the Soviet crews (which had just completed a 630 km march) and the Spanish infantry resulted in sixteen tanks being either destroyed or disabled (some salvaged) and 37 tank crewmen becoming casualties.[4]

Analysis of the Red Army's doctrine developed during the 1930s and documented in the 1936 Field Manual[5] shows that the cavalry arm was expected to perform in the role of the supporting dismounted infantry, and this was repeatedly displayed during the operations on the Eastern Front through use of the cavalry mechanized groups. The idea of using infantry tank desant was, however, retained in the 1942 Field Instructions for the infantry (battalion)[6]

Almost universal mechanization has rendered this tactic mostly obsolete among the more advanced armed forces, with infantry riding special-purpose armoured personnel carriers or infantry fighting vehicles into battle. The uses of explosive reactive armor, which creates a danger zone around an armoured vehicle by detonating an explosive charge when the tank suffers a serious hit, and gas turbine engines, with extremely hot exhaust, makes tank desant a dangerous and undesirable alternative.

Other military forces, including the United States Army in the Vietnam War, the Soviet Army in the War in Afghanistan, and the Russian Ground Forces in the First Chechen War, have chosen to ride atop their carriers while on patrol or routine movement, rather than inside them.

In contrast to the offensive Soviet tank desant tactics of World War II, these were soldiers who wanted to be able to move from their vehicles quickly in case of ambush (which often turned their transports into death traps). Fearing land mines and rocket-propelled grenades widely used by guerrillas, these soldiers refused to stay inside the personnel carriers—contravening normal standing orders for several reasons:

Soviet soldiers also adopted the tactic of riding the roofs of their BTRs (armoured personnel carriers), BMPs, BMDs and, rarely, tanks. During the Second Chechen War and other local conflicts of the post-Soviet era, the units of the Russian military and law enforcement acquired the tactic, making it a routine. However, riding outside the vehicles is still prohibited by Russian military doctrine, so it is not used during training and maneuvers. 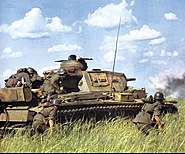 German infantry during an advance, 1941

U.S. Marines ride on top of an M1A1 Abrams tank in April 2003, Baghdad, Iraq
Add a photo to this gallery

Retrieved from "https://military.wikia.org/wiki/Tank_desant?oldid=2290066"
Community content is available under CC-BY-SA unless otherwise noted.