The Tupolev Tu-2 (Development names ANT-58 and 103, NATO reporting name: Bat) was a twin-engine Soviet (high) speed daylight bomber (SDB) front line bomber (FB) aircraft of World War II vintage. The Tu-2 was tailored to meet a requirement for a high speed bomber or dive-bomber, with a large internal bomb load, and speed similar to that of a single seat fighter. Designed to challenge the German Junkers Ju 88, the Tu-2 proved comparable, and was produced in torpedo, interceptor and reconnaissance versions. The Tu-2 was one of the outstanding combat aircraft of World War II and it played a key role in the Red Army's final offensives.[1]

In 1937 Andrei Tupolev, along with many Soviet designers at the time, was arrested on trumped-up charges of activities against the State. Despite the actions of the Soviet government, he was considered important to the war effort and following his imprisonment, he was placed in charge of a team that was to design military aircraft. Designed as Samolyot (Russian: "aircraft") 103, the Tu-2 was based on earlier ANT-58, ANT-59 and ANT-60 light bomber prototypes.[2] Essentially an upscaled and more powerful ANT-60 powered by AM-37 engines, the first prototype was completed at Factory N156, and made its first test flight on 29 January 1941, piloted by Mikhail Nukhtinov.[2] Mass production began in September 1941, at Omsk Aircraft Factory Number 166, with the first aircraft reaching combat units in March 1942. Modifications were made based on combat experience, and Plant Number 166 built a total of 80 aircraft. The AM-37 engine was abandoned to concentrate efforts on the AM-38F for the Il-2, which required Tupolev to redesign the aircraft for an available engine. Modifications of this bomber took ANT-58 through ANT-69 variants. A further 2527 aircraft were built at Kazan, with these modifications. Production ceased in 1951 after a total of some 3,000 aircraft were delivered to various Soviet Bloc air forces.[1]

Built from 1941 to 1948, the Tu-2 was the USSR's second most important twin-engine bomber (the first being the Pe-2). The design brought Andrei Tupolev back into favour after a period of detention. It was highly effective, being faster and more nimble, as well as having a greater bomb load and range, than virtually all medium bombers in service during the war with any army.[citation needed] Crews were universally happy with their Tupolevs. Pilots could maneuver like fighters and they were fast and tough enough to survive heavy damage.[3] The Tu-2 remained in service in the USSR until 1950. Some surplus Tu-2s were provided to the Chinese People's Liberation Army Air Force for use in the Chinese Civil War. Some Chinese Tu-2s were shot down by British and American airmen during the Korean War. In the 1958–1962 counter-riot actions in Qinghai-Tibet Plateau covering Qinghai, Tibet, southern Gansu, and western Sichuan, Chinese PLAAF Tu-2s took on the roles of ground-attack, reconnaissance and liaison. The Chinese Tu-2s were retired at the end of 1970s.

After World War II, the Tu-2 proved to be an ideal test aircraft for various powerplants, including the first generation of Soviet jet engines.[1] 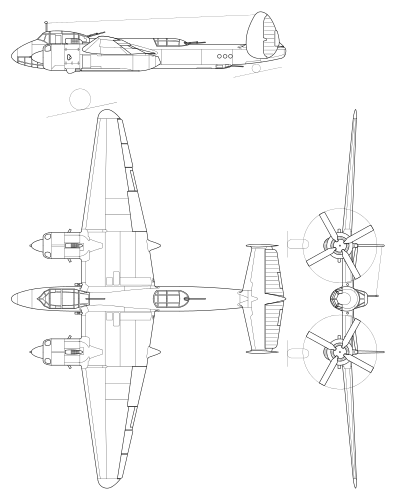 The initial version of this article was based on material from aviation.ru. It has been released under the GFDL by the copyright holder.

Retrieved from "https://military.wikia.org/wiki/Tupolev_Tu-2?oldid=4790321"
Community content is available under CC-BY-SA unless otherwise noted.