The Type 89 Grenade Discharger (八九式重擲弾筒, Hachikyū-shiki jū-tekidantō?), inaccurately and colloquially known as a knee mortar by Allied forces, is a Japanese grenade launcher or light mortar that was widely used in the Pacific Ocean theatre of World War II.

The Japanese Army, noting that grenades were short-ranged weapons, began efforts to optimize these weapons for close-in infantry fighting. After studying employment of grenades and mortars on the battlefield, the Japanese Army developed hand grenades, rifle grenades, and grenade/mortar shell dischargers (small mortars) suited to warfare in typical short-range combat environments such as urban, trench, and jungle warfare.

As part of this effort, the Japanese Army had adopted by 1932 a set of fragmentation grenades with almost universal adaptability. The Type 91 fragmentation grenade could be thrown by hand, fired from a spigot-type launcher, or used in a mortar-like grenade discharger, the Type 89.[1]

The Type 89 entered service in 1929, and differs from the earlier Type 10 Grenade Discharger in that it has a rifled barrel. The Type 89 could fire two types of grenades or shells: the Type 91 Grenade, which was a normal infantry fragmentation grenade adapted to the Type 89 discharger, and the Type 89 50 mm shell, which was an impact-detonated shell with considerably more explosive power.

When fired from the Type 89 discharger, the Type 91 fragmentation grenade was fitted with a propellant base and time fuse. It did not explode upon contact, but was designed to ignite its fuse while in flight. A weak creep spring inside the grenade firing mechanism allowed the firing pin to be thrown back upon launching, igniting a time fuse with a 7-8 second delay. Using this system, the Type 91 grenades could be launched right through jungle cover or through small openings without the danger of premature detonation in the event the grenade struck an object on its way to the target.[2] Although the Type 89 could be fired by a single person, it was typically operated with a crew of 3, enabling it to reach a rate of fire of about 25 rounds per minute.[3]

The Type 89 discharger could also be used with a more powerful impact-detonated shell approaching the power of a light mortar. Weighing approximately two pounds, it was known as the Type 89 50mm shell, and was made in high explosive (HE), incendiary, and smoke variants. To fire the shell (which had a nose-mounted impact fuse that detonated on contact), it was dropped base-down inside the tube of the discharger. By setting the Type 89 discharger at a fixed angle of 45 degrees, and varying distance to target by adjusting the size of a variable chamber space inside the discharger mechanism, Japanese soldiers could adjust fire onto multiple targets at varying ranges while firing the contact-detonated 50 mm shell through a single small clearing in the jungle canopy.[4] The method worked equally well when firing from deep trenches or pits, or between various building obstructions when fighting inside a built-up town or city.[4]

With its curved support plate, the Type 89 was designed to be placed on the ground or against a log or trunk at a fixed firing angle of 45 degrees. However, since it used a spring-loaded, lanyard-operated firing pin mechanism, in an emergency it could fire grenades or shells at point targets while braced horizontally against a tree or building.

The Type 89 discharger first saw service in China and Manchuria. During World War II, the weapon was used in Burma, China, and the Pacific islands. The Japanese Navy paratroopers carried special containers for the Type 89 clipped to their harnesses to provide fire support right on the landing zone.[5] Allied troops soon learned to hit the ground when they heard the telltale 'pop' of the weapon launching its grenades or shells, in some cases from more than 200 yards (183 m) away.[1] Some Allied infantrymen mistakenly assumed that the launcher's curve plate was propped on the leg to fire and thereafter referred to it as a "knee mortar". However, any soldier or marine who tried to fire a captured Type 89 in this fashion received a severe bruise (and sometimes a broken thigh bone) from the hefty recoil.[5]

The Type 89 discharger and its ammunition was responsible for many Chinese and later, Allied casualties after the start of World War II.

Japanese soldier demonstrating the correct use of the Type 89 discharger. 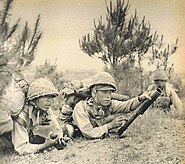