Military Wiki
Register
Don't have an account?
Sign In
Advertisement
in: Articles incorporating text from Wikipedia, Regiments of the United States Army

The Combat Arms Regimental System (CARS), was the method of assigning unit designations to units of the five combat arms (Infantry, Field Artillery, Armor, Cavalry, and Air Defense Artillery) of the United States Army from 1957 to 1981. CARS was superseded by the U.S. Army Regimental System (USARS) in 1981.

Before the adoption of CARS, there was no satisfactory means of maintaining the active life of the combat arms organizations. Whenever the nation entered periods of military retrenchment, units were invariably broken up, reorganized, consolidated, or disbanded. During periods of mobilization, large numbers of new units were created. Changes in weapons and techniques of warfare produced new types of units to replace the old ones. As a result, soldiers frequently served in organizations with little or no history, while units with long combat records remained inactive.

In the late 1950s requirements for maneuverable and flexible major tactical organizations demanded highly mobile divisions with greatly increased firepower. For this purpose the regiment was deemed too large and unwieldy and had to be broken up into smaller organizations. (Most artillery and armored regiments had already been broken up for flexibility and maneuverability during World War II.)

When the U.S. Army division was reorganized under the Pentomic structure in 1957, the traditional regimental organization was eliminated, raising questions as to what the new units were to be called, how they were to be numbered, and what their relationship to former organizations was to be.

On 24 January 1957 the Secretary of the Army approved the CARS concept, as devised by the Deputy Chief of Staff for Personnel, which was designed to provide a flexible regimental structure that would permit perpetuation of unit history and tradition in the new tactical organization of divisions, without restricting the organizational trends of the future.

Units that participated in CARS[]

The criteria for the majority of the regiments selected were two factors: age (one point for each year since original organization) and honors (two points for each campaign and American decoration). Those regiments with the most points were selected for inclusion in the system.

Each company, battery or troop in the regiment (as originally organized) was reorganized as the headquarters and headquarters element of a new battle group, battalion, or squadron in the new regiment. The new battle group, battalion, or squadron's organic elements (lettered elements, such as "Company A") were constituted and activated as new units. Each of the old companies, batteries, or troops of the former regiment also had the capability of becoming a separate company, battery, or troop in the new regiment. The regimental headquarters was transferred to Department of the Army control. (For detailed charts of typical regiments reorganized under CARS, see Appendix B.)

Difference between a brigade and a regiment[]

In a regiment not organized under CARS, there is a fixed number of organic elements organized into battalions or squadrons. For example, the infantry regiment of World War II contained Companies A through M divided into three battalions, plus supporting elements such as the service company.

A brigade, on the other hand, is a flexible organization; it has no permanent elements. A brigade may have several different kinds of units assigned to it, such as: 3 light infantry battalions or 2 mechanized infantry and 1 armor battalion or 1 light, 1 mechanized and 1 armor battalion; plus support units. The usual number of maneuver battalions was 3; however, this was a guideline not a rule (ex: the 173rd Airborne Brigade in Vietnam had 4 airborne infantry battalions).

In tactical structure, therefore, it is very similar to the Regimental Combat Team of World War II and Korean War. Its maneuver (infantry and armor) elements were not required to be from the same regiment. Since they were flexible, except for the headquarters and headquarters company, no two brigades need be alike, whereas all regiments were fixed with organic elements provided for under basic tables of organization and equipment.

Separate batteries, troops, and companies of CARS regiments display only those honors they actually earned, not the regimental ones. Campaign participation credit for these guidon-bearing units are displayed by silver bands and decorations streamers. (See ARs 672-5-1, 840-10 and 870-5 for further details.) Personnel wear the distinctive insignia for their regiment and the shoulder sleeve insignia of their division or other tactical organization to which they were assigned. (See AR 670-5 for further details.) The Adjutant General controls the designations of elements to be activated and coordinates his selections with the Center of Military History.

Illustrations of organization under CARS[] 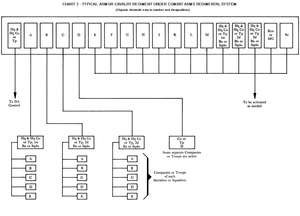 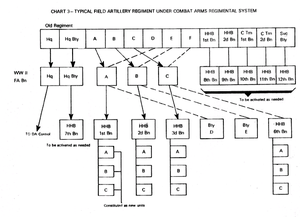 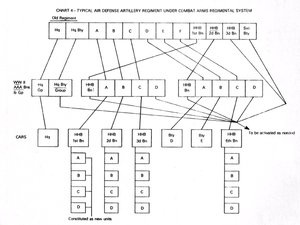