The UGM-133A Trident II, or Trident D5 is a submarine-launched ballistic missile (SLBM), built by Lockheed Martin Space Systems in Sunnyvale, California, and deployed with the American and British navies. It was first deployed in March 1990,[4] and remains in service. The Trident II Strategic Weapons System is an improved SLBM with greater accuracy, payload, and range than the earlier Trident C-4. It is a key element of the U.S. strategic nuclear triad and strengthens U.S. strategic deterrence. The Trident II is considered to be a durable sea-based system capable of engaging many targets. It enhances the U.S. position in strategic arms negotiation with performance and payload flexibility that can accommodate active treaty initiatives (see New START). The Trident II's increased payload allows nuclear deterrence to be accomplished with fewer submarines,[16] and its high accuracy – approaching that of land-based missiles – enables it to be used as a first strike weapon.[17][18][19]

Trident II missiles are carried by 14 US Ohio and four British Vanguard-class submarines, with 24 missiles on each Ohio class and 16 missiles on each Vanguard class (the number of missiles on Ohio-class submarines will be reduced to 20 each in coming years[when?][needs update], in compliance with the New Strategic Arms Limitation Treaty). There have been 176 successful test flights of the D5 missile since design completion in 1989,[20] the most recent being from USS Nebraska in September 2019.[21] There have been fewer than 10 test flights that were failures,[22] the most recent being from HMS Vengeance off the coast of Florida in June 2016.[23] The D5 is the sixth in a series of missile generations deployed since the sea-based deterrent program began 60 years ago. The Trident D5LE (life-extension) version will remain in service until 2042.[24]

The Trident II was designed with greater range and payload capacity than its predecessor (Trident C-4). In 1972, the US Navy projected an initial operating capability (IOC) date of 1984. The US Navy shifted the IOC date to 1982. On 18 October 1973, a Trident program review was administered. On 14 March 1974, the US Deputy Secretary of Defense disseminated two requirements for the Trident program. The first was an accuracy improvement for the Trident C-4. The second requirement asked for an alternative to the C-4, or a new Trident II missile with a larger first-stage motor than the C-4.

The U.S. Navy conducted studies to determine whether the more expensive Trident II could be constructed similarly to the US Air Force's MX ICBM, primarily to decrease budget costs. It was established that the Trident II would be 83 inches in diameter and 44 feet in length in order to match the performance of the existing MX ICBM. Modifications to the guidance system, electronics hardening, and external protective coatings were incorporated into the design. While this satisfied the Navy's study requirements, it did not accommodate the US Air Force payload requirements.

Propulsion stages were proposed to be used between the first stage and second stage motors, effectively making the Trident II a longer three-stage missile than the C-4. Studies were delayed in 1978 when Congress only approved $5 million of the suggested $15 million for the Navy and Air Force program studies. By December 1978, the Navy's and the Air Force's own studies agreed with each other that a similar missile structure would not achieve desired savings. It was determined that the Navy and Air Force would maintain and be responsible for their own unique weapon systems. The US Navy continued with its own design of the Trident II.

In March 1980, US Secretary of Defense Harold Brown proposed an increased level of funding for the submarine-launched ballistic missile modernization, emphasizing increased accuracy. The House Armed Services Committee (HASC) recommended no funding, while the Senate Armed Services Committee (SASC) recommended full funding of $97 million. The SASC asked for a plan incorporating "the fullest possible competition . . . [and] should consider competing among contractors for each major component, including the integrated missile." $65 million was awarded for the submarine-launched ballistic missile modernization.

On 2 October 1981, President Reagan called for the modernization of the strategic forces.[25] The Defense Department directed the Navy to fund all development of the Trident II D5 missile with a December 1989 IOC. All research and development efforts would be directed toward "a new development, advanced technology, high accuracy Trident II D5 system." In December 1982, Deputy SECDEF Frank Carlucci advised Secretary of the Navy Caspar Weinberger to include funding for a new reentry vehicle–warhead combination for Trident II. The reentry vehicle was to be designated as the Mk 5, which was to have a greater yield than the Mk 4. The development contract for Trident II was issued in October 1983. On 28 December 1983, the deputy SECDEF authorized the Navy to proceed with full-scale engineering development of the Trident II D5. The first Trident II launch occurred on 15 January 1987,[26] and the first submarine launch was attempted by USS Tennessee,[2] the first D-5 ship of the Ohio class, on 21 March 1989 off the coast of Cape Canaveral, Florida. The launch attempt failed four seconds into the flight because the plume of water following the missile rose to greater height than expected, and water was in the nozzle when the motor ignited. Once the problem was understood, relatively simple changes were quickly made, but the problem delayed the IOC of Trident II until March 1990.[4][27] IOC for SWFPAC[Clarification needed] completed on schedule in 2001, allowing Trident II SSBN to be deployed in the Pacific theater.

In 1980, the United Kingdom adopted the missile as part of its Trident nuclear program.[28]

The Trident II is a three-stage rocket, each stage containing a solid-fuel rocket motor. The first motor is made by Thiokol and Hercules Inc. This first stage incorporates a solid propellant motor, parts to ensure first-stage ignition, and a thrust vector control (TVC) system. The first-stage section, compared to the Trident C-4, is slightly larger, allowing increased range and a larger payload. In addition to a larger motor, the D-5 uses an advanced and lighter fuel binder (polyethylene glycol) than the C-4.[29] This fuel is more commonly known as NEPE-75. (NEPE stands for nitrate ester plasticized polyether.)[30][31]

Both the first- and second-stage motors are connected by an interstage casing, which contains electronic equipment and ordnance for separation during flight. The second stage also contains a motor made by Thiokol and Hercules Inc., parts to ensure the second-stage ignition, and a TVC system. The first and second stages are both important to the structural integrity of the missile. To ensure that the stages maintain a maximal strength-to-weight ratio, both stages are reinforced by a carbon-fiber-reinforced polymer hull.[30]

The second- and third-stage sections are connected by an integrated equipment/adapter section (ES). The equipment/adapter section is modified to be shorter and more compact than the C-4's adapter section.[29] The D-5's equipment section contains critical guidance and flight control avionics, such as the Mk 6 navigation system. The equipment section also contains the third-stage TVC system, ordnance for ejecting from the second-stage motor, and the MIRV platform. The nose fairing shields the payload and third-stage motor. Mounted within the nose cap (above the nose fairing) is an extendable aerospike.[32] This aerospike effectively decreases drag by 50%. The third-stage hull is also reinforced by carbon fiber and kevlar.[30]

The Trident II is the first missile of the US Navy's Fleet Ballistic Missile program to incorporate a 3D printed component.[33]

Before the launch sequence is initiated, the on-board MARK 6 navigation system is activated. The specified mission trajectory is loaded onto the flight computer.[34]

The astro-inertial guidance uses star positioning to fine-tune the accuracy of the inertial guidance system after launch. As the accuracy of a missile is dependent upon the guidance system knowing the exact position of the missile at any given moment during its flight, the fact that stars are a fixed reference point from which to calculate that position makes this a potentially very effective means of improving accuracy. In the Trident system this was achieved by a single camera that was trained to spot just one star in its expected position. If it was not quite aligned to where it should be, it would indicate that the inertial system was not precisely on target and a correction would be made.[38]

The equipment section, with the MIRV, then aims the reentry vehicles (RV) towards earth. The payload is then released from the MIRV platform. To prevent the PBCS correctional thrust from interfering with the RV when released, the equipment section initiates the Plume Avoidance Maneuver (PAM). If the RV will be disrupted by the PBCS nozzle's thrust, the nearest nozzle will shut off until the RV is away from the MIRV. The PAM is used only when a nozzle's plume will disrupt the area near an RV. The PAM is a specialized design feature added to the Trident II to increase accuracy.[36] 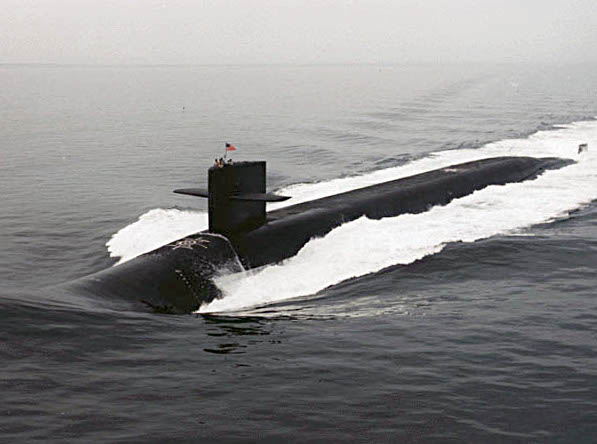 USS Kentucky, an Ohio-class submarine of the US Navy 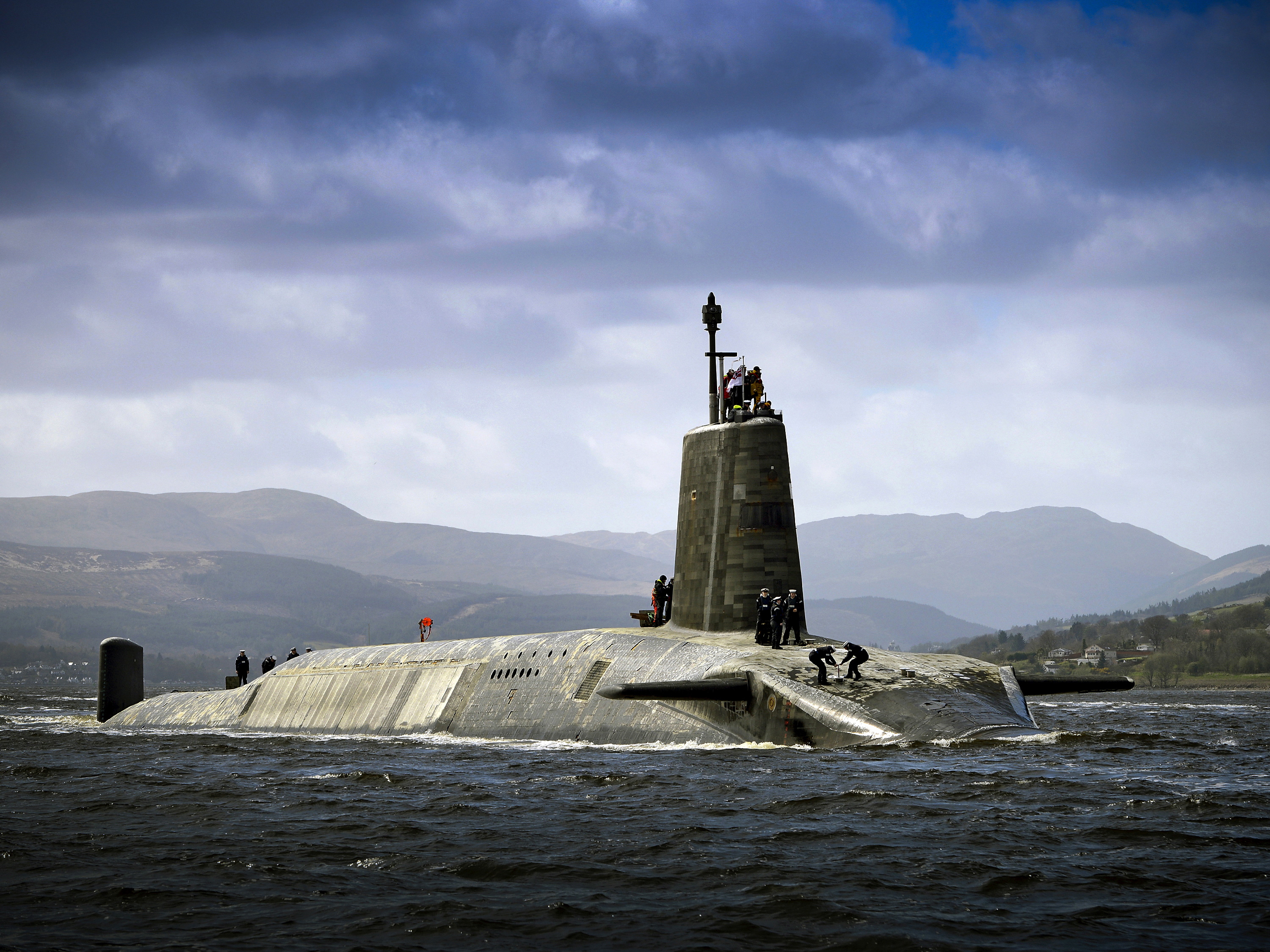 HMS Vigilant, a Vanguard-class submarine of the Royal Navy

The Royal Navy operates its missiles from a shared pool, together with the Atlantic squadron of the U.S. Navy Ohio-class SSBNs at King's Bay, Georgia. The pool is co-mingled and missiles are selected at random for loading on to either nation's submarines.[23][44]

Retrieved from "https://military.wikia.org/wiki/UGM-133_Trident_II?oldid=4911878"
Community content is available under CC-BY-SA unless otherwise noted.