Reacquired by the Navy on 28 September 1964 she was taken in hand by General Dynamics Quincy Shipbuilding Division for extensive modernization and rebuilding at its Quincy, Massachusetts yard. This included adding 80 feet to her length. While under conversion to a missile-range instrumentation ship, she was renamed for Muscle Shoals, Alabama and reclassified, becoming Muscle Shoals (AGM-19). Renamed Vanguard on 1 September 1965, she was placed in service with MSTS on 28 February 1966 as USNS Vanguard (T-AGM-19). Designed to be a seagoing missile tracking station, she participated in the Apollo Project test series and into 1969 had continued in these duties. She then participated in the Skylab program and the joint US/Soviet Apollo–Soyuz Test Project.

In September 1980, she was reconfigured and the large missile tracking antennas were removed. She replaced the USS Compass Island and reclassified as T-AG-194. Her role became that of a Navigational Test Ship and she was used to check submarine navigation systems. She steamed over 250,000 miles in support of Poseidon and Trident I navigation subsystems and in development of the Trident II navigation subsystem. She was stricken again on 12 December 1999 after being replaced by USNS Waters (T-AGS-45).[1]

On 29 November 2001 she was transferred to the United States Maritime Administration (MARAD). On 16 March 2005 MARAD issued a "Request for Comments" for public input on the historical significance of the Vanguard.[2]

As of 29 February 2008 she is anchored in the James River (2nd from right) as part of the National Defense Reserve Fleet or James River Reserve Fleet, a "Ghost fleet". Following historical review, the vessel was cleared for disposal by the Virginia State Historic Preservation Office on 15 November 2006. 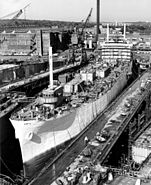