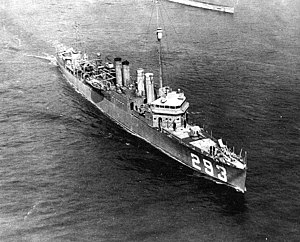 Billingsley joined Destroyer Force, Atlantic Fleet, in operations along the east coast and in the Caribbean until the summer of 1920 when she made Naval Reserve training cruises. In reserve until June 1922, she then joined Division 26, Squadron 9, Destroyer Force, at Philadelphia, Pennsylvania. She cruised along the Atlantic coast until June 1924, when Division 26 joined United States Naval Forces Europe. Billingsley cruised in European and Mediterranean waters for the next year and assisted refugees in the Near East. In the spring of 1925 she acted as plane guard for the North Atlantic crossing of the Army "Around-the-World Flight." Later in the year she returned home and resumed her routine activities along the east coast until the summer of 1929 when she again made Naval Reserve cruises.

Billingsley reported to Philadelphia Navy Yard in September 1929; was decommissioned 1 May 1930; and sold 17 January 1931.

As of 2005, no other ship in the United States Navy has been named Billingsley.

Retrieved from "https://military.wikia.org/wiki/USS_Billingsley_(DD-293)?oldid=2646553"
Community content is available under CC-BY-SA unless otherwise noted.