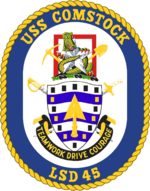 USS Comstock (LSD-45) is a Whidbey Island-class dock landing ship of the United States Navy. She was the second Navy ship to be named for the Comstock Lode in Nevada. Discovered in 1859, it was one of the richest deposits of precious metals known in the world.

Comstock was laid down on 27 October 1986, by the Avondale Shipyards, New Orleans, La.; launched on 15 January 1988; and commissioned on 3 February 1990, under the command of CDR. R. H. Howe, USN. Comstock was the first USN combatant ship to have a fully integrated crew of male and female sailors.

As of 2002, Comstock is homeported at NS San Diego, California, and assigned to Expeditionary Strike Group 3.

This article includes information collected from the Naval Vessel Register, which, as a U.S. government publication, is in the public domain.

Retrieved from "https://military.wikia.org/wiki/USS_Comstock_(LSD-45)?oldid=2956249"
Community content is available under CC-BY-SA unless otherwise noted.