The accident killed seven Fitzgerald sailors. Their bodies were recovered from the flooded berthing compartments of the ship.[5] At least three more of the crew of nearly 300 were injured, including the ship's commanding officer, Commander Bryce Benson.[4] The top two senior officers and the top enlisted sailor were relieved of duty; about a dozen other sailors will receive non-judicial punishment. 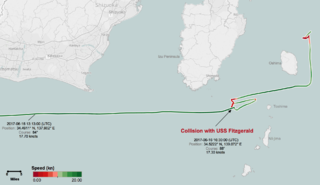 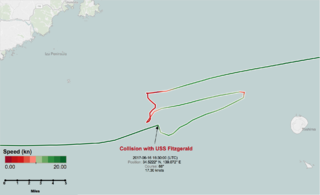 In a report released on 1 November[6] the Navy describes Fitzgerald's course in the half-hour prior to the collision as running 190T (nearly due south), with a speed of 20 knots (37 km/h; 23 mph). At about 01:17 Fitzgerald's OOD (Officer of the Deck, responsible for the ship's course and maneuvering) misjudged the course of ACX Crystal. At 01:25 the OOD noticed ACX Crystal getting closer, and ordered a turn to 240T (that is, to turn to the right and pass behind ACX Crystal), but then rescinded the order. Instead he "ordered an increase to full speed and a rapid turn to the left (port)" (to pass ahead of ACX Crystal), but "these orders were not carried out." At 01:29 the "Bosun Mate of the Watch, a more senior supervisor on the bridge, took over the helm and executed the orders."[7] The Navy has not said what those orders were, nor what transpired on the bridge following the collision at 01:30. Among other failings the Navy says "physical look out duties" were not performed on the starboard (right) side, where ACX Crystal and two other ships were approaching. The collision damaged Fitzgerald's starboard (right) side, including a "large gash near the keel" in the hull below the waterline, according to the commander of the US Seventh Fleet, Vice Admiral Joseph Aucoin.[8] The container ship's bulbous bow penetrated the destroyer's hull below the waterline, flooding a machinery space, the radio room, and two crew berthing spaces with sea water.[9][10] The collision also destroyed the captain's cabin, according to VADM Aucoin.[10] Hours of damage control by Fitzgerald's crew kept the ship from sinking.[11]

The executive officer assumed command as the destroyer returned to port with the assistance of tugs, the destroyer USS Dewey, and the Japanese Coast Guard.[12][13][14][15]

The Japan Coast Guard and Japan Maritime Self-Defense Force participated in the search-and-rescue operations, including evacuating CDR Benson by helicopter.[4][16] The other injured sailors were evacuated by US military helicopters.[4]

Although the collision occurred at night, the weather was clear. US and Japanese inquiries have begun to investigate the cause of the collision.[11]

Seven fatalities were reported, all aboard Fitzgerald. The Navy identified them as:

Three other sailors aboard the Fitzgerald were injured, including the captain.

Discrepancies about the time of collision[]

The time of the collision was unclear at first, but in the days after the collision a time of 01:30 was generally accepted. On 19 June (Japan Standard Time)—two days after the collision—the Japan Coast Guard and Nippon Yusen (NYK Line), ACX Crystal's operator, said, after further investigation, the collision was at about 01:30. At this time, ACX Crystal made a sudden turn, according to Automatic Identification System (AIS) data. (US Navy ships frequently turn off their AIS to preserve operational security.[19]) The US Navy initially said the event was at 02:20, when AIS data showed the cargo ship returning to the same area where it had turned earlier, and five minutes before the event was reported to the Japan Coast Guard by ACX Crystal at 02:25. On Monday, the US Navy said "all aspects of this incident" were under investigation and declined to comment on the discrepancy.[20][21] On 20 June, the Navy said it was "not disputing" the Japanese Coast Guard and ACX Crystal's captain's timeline, adding later that the Navy would not comment again on the time of the collision until after its investigation was complete.[22][23] In the Navy's report released on 1 November the time of the collision is given as 01:30:34.[6]

NYK Line was unable to provide information on what happened between the time of the collision and the report.[21] The Japan Coast Guard is investigating whether the collision was reported promptly.[20]

As the impact was on starboard side of Fitzgerald, the rules of the sea suggest Fitzgerald failed to give way as required, but there are possible complicating factors that may result in a different conclusion, such as if one of the vessels was overtaking the other, or other ships in the immediate vicinity created a special situation.[24][25]

After hitting Fitzgerald, ACX Crystal continued on course for 30 minutes, then returned to the collision location. Afterwards, she resumed her original course.[26] Investigators are seeking to understand why Fitzgerald's crew and sensor systems do not seem to have detected ACX Crystal in time to avoid the incident.[26] ACX Crystal's captain, in a report to the ship's owner seen by Reuters, said that Fitzgerald continued sailing on a collision course despite ACX Crystal signalling with flashing lights the imminent danger. The US Navy did not comment on the report.[27]

The Navy initially said Fitzgerald is repairable and will be back in service within twelve months.[11] A few days later, Navy officials said the superstructure, damaged in the collision, may actually be warped, which could have created misalignment problems for the AN/SPY-1 radar, which was also damaged on the starboard side. Flooding extended to a main engineering space and radio central, destroying equipment worth millions of dollars.[28] As at 30 June, the Navy expected to be able to put her in drydock between 6 and 8 July. With the need for a new dry dock plan, the damage caused to the hull by the collision could delay the process.[28] Fitzgerald entered a dry dock in Yokosuka on 11 July, in order for the Navy to evaluate the extent of the damage to Fitzgerald before deciding whether to repair the ship in Japan or back in the United States.[18] An analyst at the Center for Strategic and Budgetary Assessments said the repairs could not be done overseas, and the dry dock inspection is mainly to determine if the ship can return to a private shipyard in the US under its own power, or, more likely, must be carried back on a heavy-lift ship.[28] The costs for the repair are expected to be in the tens of millions of dollars.[29] Fitzgerald was scheduled to undergo a planned modernization in 2019, but it is yet unclear if the timeline for that will be affected by the repairs.[29]

In late August 2017, it was reported that the destroyer will be transported by the Dockwise heavy-lift ship MV Transshelf to Huntington Ingalls Industries’ shipyard in Pascagoula.[30][31][32] On 28 November 2017, the destroyer was further damaged by two punctures to its hull during the loading process to the MV Transshelf.[33]

Within a day of the collision, investigations were begun by the United States Navy, US Coast Guard, Japan Coast Guard, Japan Transport Safety Board, and ACX Crystal's insurers. The US Navy is conducting an internal inquiry of its crew operations, led by Rear Admiral Brian Fort, former commander of Gonzalez and the present commander of Navy Region Hawaii and commander of Naval Surface Group Middle Pacific.[5][34][35] The US and Japanese coast guards are investigating the cause of the accident.[22] On 22 June, Japanese investigators said they had the cargo ship's data recorder.[23]

Preliminary findings suggest the accident was caused by multiple errors by Fitzgerald's crew and a failure to take action in the minutes leading up to the collision, two unnamed US defense officials told CNN.[36]

A US Navy official said, off the record, that since the warship had sovereign immunity, the US Navy would not allow crew members of Fitzgerald to be interviewed by officials from other countries. The United States Coast Guard is instead expected to provide summaries to the Japan Transport Safety Board (JTSB), which will share them with local investigators.[37]

On 17 August 2017, Vice Chief of Naval Operations Admiral William Moran announced that Commander Bryce Benson, Executive Officer Commander Sean Babbitt and Ship Command Master Chief Petty Officer Brice Baldwin are to be relieved of shipboard duty, and close to a dozen other sailors will receive non-judicial punishment. Moran stated that "serious mistakes" were made by the "bridge team" (those conducting safety watch on board the ship's bridge) which caused them to lose "situational awareness," thus rendering it impossible to avoid the collision even after the container ship had already been sighted.[38]

On 23 August 2017, commander of the US Seventh Fleet, Vice Admiral Joseph Aucoin, was dismissed a few weeks before his planned retirement date following four collisions within a year involving Seventh Fleet warships.[39] On 18 September 2017, the new commander of the US Seventh Fleet, Vice Admiral Phillip Sawyer, as part of the investigations into four surface ship incidents involving Navy ships in the Western Pacific in 2017, including the collision involving the Fitzgerald, ordered that Rear Admiral Charles Williams, commander of Combined Task Force 70, and Captain Jeffrey Bennett, commodore of Destroyer Squadron 15, be removed from their positions due to a loss of confidence in their ability to command.[40]

Fitzgerald is a Flight I Arleigh Burke-class destroyer. Built at Bath Iron Works in Maine, the ship was commissioned into the US Navy on 14 October 1995. Since September 2004, Fitzgerald has operated from the US Yokosuka base in Japan, as part of Destroyer Squadron 15 attached to Carrier Strike Group 5, a unit of the US Seventh Fleet.

ACX Crystal is a container ship owned by the Olympic Steamship Co SA, Panama. Built by STX Offshore & Shipbuilding at Changwon, South Korea, the ship entered service in August 2008. ACX Crystal has been employed for use by ACX, a subsidiary of NYK Line, on shipping routes between Japan, Vietnam, and Thailand.