For other ships of the same name, see USS Key West.

USS Key West (SSN-722), a Los Angeles-class submarine, was the third ship of the United States Navy to be named for Key West, Florida. The contract to build her was awarded to Newport News Shipbuilding and Dry Dock Company in Newport News, Virginia on 13 August 1981 and her keel was laid down on 6 July 1983. She was launched on 20 July 1985 sponsored by Mrs. Virginia Conn, and commissioned on 12 September 1987 with Commander Warren Lipscomb, Jr. in command. She is the fourth Los Angeles - class submarine equipped with the vertical launch system (VLS) capable of carrying 12 Tomahawk land attack cruise missiles (TLAM).

USS Key West was home ported at the Norfolk Naval Base, Norfolk, VA. She operated out of Norfolk, VA until 1995. During her Atlantic Fleet service, she completed numerous Cold War deployments and supported operations in the Caribbean, Western Atlantic and Mediterranean. USS Key West was awarded the "Hook-em" antisubmarine warfare (ASW) excellence award following her 1990 Mediterranean Cruise. She later was awarded the Meritorious Unit Commendation Award for her superior performance in Cold War operations during the 1989 and 1990 deployments. USS Key West won the "TOP TORP" Torpedo Shooting Competition in 1992 and was later awarded the Submarine Squadron Eight Battle "E" for that year.

The USS Key West deployed with the Theodore Roosevelt Carrier Battle Group in 1995. During that deployment she operated in the Mediterranean Sea and Persian Gulf and was awarded the Navy Unit Commendation, Armed Forces Service, and NATO Service medals. Following the 1995 deployment, USS Key West underwent an availability in Norfolk, VA in preparation for her transfer to the Pacific Fleet in 1996. She departed Norfolk in June 1996 and transited the Panama Canal as part of her transfer to the Pacific Fleet. She arrived in Pearl Harbor, Hawaii in July 1996 and began operations under Submarine Squadron One.

The USS Key West visited her name sake city in 1987 for a week long celebration after commissioning, in 1992 and later in 1994. Since reassignment to the Pacific Fleet she has not been able to visit Key West, Florida again.

In April 1997, USS Key West conducted her first Pacific deployment with the Constellation Carrier Battle Group. During this deployment, she operated in the Pacific Ocean, Indian Ocean and the Persian Gulf. Later that year, USS Key West was reassigned to Submarine Squadron Three. In the next year, she deployed to the Eastern Pacific in support of the Carl Vinson and Abraham Lincoln Carrier Battle Groups, and later supported the 1998 Rim of the Pacific (RIMPAC) exercise.

From 1998 through 2001 she supported Pacific theater operations in both the Third Fleet and Seventh Fleet area of operations. During this time she participated in numerous bilateral and multilateral exercises with our Pacific Theater partner. Following the 11 September attacks, she was redirected Bahrain to the Northern Arabian Sea where she launched Tomahawk Land Attack Cruise Missiles against Afghanistan in October 2001.[1]

In 2007 USS Key West was named "Battle E" for COMSUBRON THREE, given to the best submarine in its squadron, awarded the Arleigh Burke Trophy for the most improved sea command in the Pacific, and awarded the Naval Unit Commendation for its outstanding accomplishments during the deployment.

In 2009 USS Key West was again awarded the "Battle E" award for COMSUBRON Three for outstanding performance during the 2009 WESTPAC deployment. 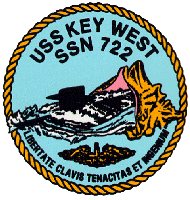 The conch shell is the focal point of the submarine's emblem for the fabled horn of the Greek God Triton and the symbol of the submarine's namesake city. The USS Key West is emerging from the shell which symbolizes the emergence of the city as the leading city of the Florida Keys.

The submarine insignia symbolizes the heritage that the ship has with all past and future submarines. The motto "Liberate Clavis Tenacitas et Ingenium" translates to "The Key to Freedom is Tenacity and Resourcefulness." Specifically, the phrase "The Key to Freedom" represents the namesake city and the submarine's mission to protect the fundamental rights and liberties of the American people.[6] The phrase "Tenacity and Resourcefulness" was used by the Mayor of Key West during his speech at the ship's launching to describe the characteristics of a true Conch —a native of Key West. Additionally, "Ingenium" is a word used by the ancient Greek and Roman historians to describe the resourcefulness and ingenuity of sailors in the period.[7]

In the Tom Clancy novel Red Storm Rising, Key West participated in a cruise missile strike against the Soviet Union.

In the novel Kirov III-Pacific Storm by John Schettler, Key West is involved in a critical action with the Russian Battlecruiser Kirov II.

In the Swedish novel Landsförrädaren by Anders Jallai, the Key West makes an appearance to save the protagonist.

This article includes information collected from the Naval Vessel Register, which, as a U.S. government publication, is in the public domain.

Retrieved from "https://military.wikia.org/wiki/USS_Key_West_(SSN-722)?oldid=2630009"
Community content is available under CC-BY-SA unless otherwise noted.