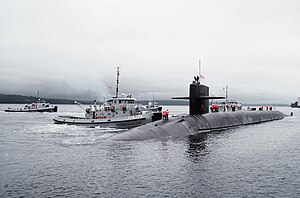 First assigned duty in the 14th Naval District, she took up and ably performed the vast array of tasks appropriate to tugs at Pearl Harbor. She continued active service at Pearl Harbor into 1970. Sometime before decommissioning, Ottumwa was transferred to Naval Submarine Base Bangor, Washington.

Stricken from the Navy List 28 October 2002, she was transferred to the General Services Administration (GSA) under the Property Donation Exchange Program, 8 July 2004. Since then, ex-Ottumwa has been extensively modified and serves as a commercial tug in the Puget Sound area.[2]

Retrieved from "https://military.wikia.org/wiki/USS_Ottumwa_(YTB-761)?oldid=2880050"
Community content is available under CC-BY-SA unless otherwise noted.