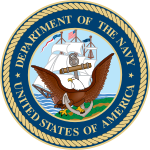 United States Navy Regulations is the principal regulatory document of the Department of the Navy (not just the United States Navy), endowed with the sanction of law, as to duty, responsibility, authority, distinctions and relationships of various officials, organizations and individuals.

Thirteen editions of Navy Regulations were published in accordance with this authority (later codified as Section 1547, Revised Statutes) between 1865 and 1948. The 1973 edition of Navy Regulations was published under authority of 10 U.S.C. § 6011, which provided that "United States Navy Regulations shall be issued by the Secretary of the Navy with the approval of the President." In 1981, this provision was amended to eliminate the requirement for presidential approval.

While leaving this provision unaffected, Congress enacted the Goldwater-Nichols Department of Defense Reorganization Act of 1986 (Pub. L. 99–443), which granted each of the service secretaries the explicit authority to prescribe regulations to carry out his or her statutory functions, powers and duties.

Retrieved from "https://military.wikia.org/wiki/United_States_Navy_Regulations?oldid=2135679"
Community content is available under CC-BY-SA unless otherwise noted.