Utah Beach was the code name for the right flank, or westernmost, of the Allied landing beaches during the D-Day invasion of Normandy, as part of Operation Overlord on 6 June 1944. Utah was added to the invasion plan toward the end of the planning stages, when more landing craft became available.

Utah Beach, about 3 miles (5 km) long, was the westernmost of the five landing beaches, located between the villages of Pouppeville and La Madeleine,[1] which became the right flank anchor of the Allied offensive along the left bank (western bank) of the Douve River estuary.[2] The German sector code was W5.

Despite being substantially off course, the US 4th Infantry Division (part of VII Corps) landed with relatively little resistance, in stark contrast to Omaha Beach, where the fighting was fierce.

The landing was planned in four waves. The first consisted of 20 Higgins boats or LCVPs, each carrying a 30-man assault team from the 8th Infantry Regiment. The 10 craft on the right were to land on Tare Green Beach, opposite the strong-point at les Dunes de Varreville. The 10 craft on the left were intended for Uncle Red Beach, 1,000 yards (900 m) farther south. The entire operation was timed against the touchdown of this first assault wave, which was scheduled to take place at 06:30 am. Eight LCTs (Landing crafts, tanks), each carrying four amphibious DD Tanks, were scheduled to land at the same time or as soon thereafter as possible.

The second wave consisted of another 32 Higgins boats with additional troops of the two assault battalions, some combat engineers, and also eight naval demolition teams that were to clear the beach of underwater obstacles.

It was followed within two minutes by the fourth wave, mainly detachments of the 237th and 299th Combat Engineer Battalions, to clear the beaches between high- and low-water marks.

Two hours before the main invasion force, a raiding party swam ashore from Landing Craft Assault at Îles Saint-Marcouf, thought to be a German observation post. It was unoccupied.

The first wave arrived at the line of departure on time and all 20 craft were dispatched abreast. Support craft to the rear were firing machine guns, possibly with the hope of exploding mines. When the LCVPs were 300–400 yards (270–360 metres) from the beach, the assault company commanders fired special smoke projectors to signal the lifting of naval support craft fire. Almost exactly at H Hour the assault craft lowered their ramps and 600 men waded through waist-deep water for the last 100 or more yards to the beach. The actual touchdown on the beach was therefore a few minutes late, but the delay was negligible and had no effect on the phasing of the succeeding wave. Enemy artillery had fired a few air bursts at sea, but otherwise there was no opposition at H Hour.

The first troops to reach shore were from the 2nd Battalion, 8th Infantry. Captain Leonard T. Schroeder, leading Company F, was the first man from a landing craft to reach the beach.[3][4] The 1st Battalion landed a few minutes later. Both came ashore considerably south of the designated beaches. The 2nd Battalion should have hit Uncle Red Beach opposite Exit 3. The 1st Battalion was supposed to land directly opposite the strong-point at les Dunes de Varreville. The landings, however, were made astride Exit 2 about 2,000 yards (1,800 metres) south.

This error was potentially very serious, for it could have caused great confusion. But it did not. The original plans, in which each assault section had a specific mission, could not be carried out in detail, of course.

Some 20 minutes after the first waves, British Royal Marine Commandos from 30 Commando Assault Unit, under the command of Captain G. Pike, landed at the beach. Their mission was the capture of a German radar station at Douvres-la-Delivrande.[5][6]

Brigadier General Theodore Roosevelt, Jr., assistant commander of the 4th Division, had requested several times, against his commander's best judgement, to go in the first wave and personally lead the initial attack on the beach strong points. His written request was finally approved by General Barton, 4th Division Commander.

Roosevelt was the only general to land with the initial seaborne assault wave on D-Day, coming ashore in Schroeder's LCVP.[4] At age 56, he was the oldest soldier to land. When Roosevelt realized the landing craft had drifted south with the current and smoke more than a mile from their objective—and that the first wave was a mile off course—he personally made a reconnaissance of the area immediately to the rear of the beach to locate the causeways which were to be used for the advance inland.

He then returned to the point of landing, contacted the commanders of the two battalions (Lieutenant Colonels Conrad C. Simmons and Carlton O. MacNeely), and coordinated the attack. Roosevelt's famous quote was, "We’ll start the war from here!" These impromptu plans worked successfully and with little confusion. With artillery landing close by, each followup regiment was personally welcomed on the beach by a cool, calm and collected Roosevelt, who inspired all by humor and confidence. He pointed almost every regiment to its changed objectives. For his actions on Utah Beach, Roosevelt was later awarded the Medal of Honor. 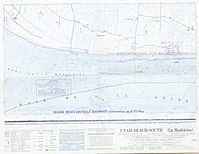 Southern Utah Beach with obstacle overprint from 30 May 1944 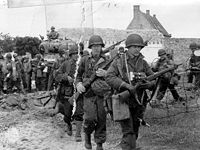 Utah Beach, 2011. View to the north.
Add a photo to this gallery

By the end of D-Day, some 23,250 troops had safely landed on the beach, along with 1,700 vehicles. Only about 200 casualties were recorded during the landings. Several factors contributed to the success at Utah compared to the bloody battle at nearby Omaha:

The true cost of Utah Beach is reflected in the heavy airborne casualties: The 101st alone lost less than 20% of its forces on D-Day.[citation needed] Also, the 1,000 casualties during Exercise Tiger, a practice run for the Utah assault, could also be considered part of the price for D-Day.

Retrieved from "https://military.wikia.org/wiki/Utah_Beach?oldid=5124946"
Community content is available under CC-BY-SA unless otherwise noted.