The Vanguard-class are a class of nuclear-powered ballistic missile submarines (SSBN) in service with the Royal Navy. Each submarine is armed with up to 16 Trident II missiles. The class was introduced in 1994 as part of the UK government's Trident nuclear weapons programme. The class includes four boats: Vanguard, Victorious, Vigilant and Vengeance. They were built at Barrow-in-Furness by Vickers Shipbuilding and Engineering between 1986 and 1999.[2] All four boats are based at HM Naval Base Clyde (HMS Neptune), 40 km (25 mi) west of Glasgow, Scotland. Since the decommissioning of the Royal Air Force WE.177 free-fall nuclear bombs in 1998, the four Vanguard submarines are the sole platforms for the United Kingdom's nuclear weapons.[2][4]

Since the late 1960s, the UK had operated four Resolution class submarines armed with US-built Polaris missiles under the terms of the 1963 Polaris Sales Agreement.

On 10 July 1980, Prime Minister Margaret Thatcher wrote to US President Carter to request the supply of Trident I (C4) missiles on a similar basis for the United Kingdom's next generation ballistic missile submarines. However in 1982 Thatcher wrote to US President Reagan to request the UK be allowed to procure the improved Trident II (D5) system, which had been accelerated by the US Navy. This was agreed in March 1982.[5] Under the agreement, the United Kingdom made a 5% research and development contribution.[6]

The Trident II D-5 achieved an initial operational capability with the U.S. Navy in March 1990. Following launch and commissioning the vessels deployed on Demonstration and Shakedown Operations (DASOs) which included test firing of Trident missiles at the United States' SLBM Launch Area, Eastern Test Range, Cape Canaveral, off the coast of Florida.

In February 2002, Vanguard began a two-year refit at HMNB Devonport. The refit was completed in June 2004 and in October 2005 Vanguard completed her return to service trials (Demonstration and Shakedown Operations) with the firing of an unarmed Trident missile. During this refit, Vanguard was illegally boarded by a pair of anti-nuclear protestors.[8] Mid-life refits for Victorious and Vigilant followed, with Vengeance currently undergoing this process.

In 2002, protesters from Trident Ploughshares breached security at Faslane Naval Base where the Vanguard submarines are based. Two protesters managed to spraypaint Vigilant with the CND symbol and the word "Vile".[9]

On 31 March 2011, Vengeance returned to Faslane naval base on the surface after developing mechanical problems while on a training exercise. According to the MOD the problems were not nuclear related.[14]

In June 2012, HMS Vigilant completed a three-year long refit which included refuelling of her nuclear reactor and costing over £300 million.[15] In October 2012, the submarine sailed to the USA where it successfully test fired an unarmed Trident II D5 SLBM.[16] However, two months later it was learned that shortly afterwards the submarine suffered unspecified problems, allegedly involving her rudder, prompting an unscheduled stop at the US Navy's Naval Submarine Base Kings Bay in order to carry out repairs.[17]

A decision on the replacement of Trident was made on the 4 December 2006. Then-Prime Minister Tony Blair told MPs it would be "unwise and dangerous" for the UK to give up its nuclear weapons. He outlined plans to spend up to £20 billion on a new generation of submarines for Trident missiles. He said submarine numbers may be cut from four to three, while the number of nuclear warheads would be cut by 20 percent to 160. Blair said although the Cold War had ended, the UK needed nuclear weapons, as no-one could be sure another nuclear threat would not emerge in the future.

The 2006 white paper stated that the option of reducing the Trident carrying submarine fleet from four to three submarines, as part of plans to cut costs and to promote nuclear disarmament, would be considered.[18] On 23 September 2009, Prime Minister Gordon Brown confirmed that this reduction to three submarines was still under consideration.[19] In February 2011, the Defence Secretary Liam Fox stated that four submarines would be needed if the UK was to retain its current capabilities.[20] On 18 May 2011 the British government approved the initial assessment phase for the construction of new Trident submarines, paving the way for the ordering of the first long-lead items and preparations for the main build to begin in the future. The new submarine class will retain the current Trident II missiles, and will incorporate a new 'PWR3' nuclear reactor as well as technology developed for the Astute-class SSNs. The final decision whether to build three or four submarines will be taken in 2016. The cost for four boats is estimated to be £15–20 billion at 2006/7 prices, and they will have a projected life span of more than 25 years.[21][22]

The Vanguard class was designed and built at Barrow-in-Furness by Vickers Shipbuilding and Engineering, now BAE Systems Submarine Solutions. The Devonshire Dock Hall was built specifically for the construction of the submarines. The missile compartment is based on the system used on the American Ohio class, although only 16 missiles are fitted, rather than the 24 equipped on the Ohio class. The Vanguard submarines were designed from the outset as nuclear-powered ballistic missile platforms to accommodate the Trident D-5 submarine-launched ballistic missile. This required the boats to be significantly larger than the previous Polaris-equipped Resolution class, and they are some of the largest submarines ever built, only eclipsed by the American Ohio-class, and Russian Typhoon- and Borei-class submarines. In addition to the missile tubes, the submarines are fitted with four 21 inch (533 mm) torpedo tubes and carry the Spearfish heavyweight torpedo[23] allowing them to engage submerged or surface targets at ranges up to 65 kilometres (40 mi; 35 nmi). Two SSE Mark 10 launchers are also fitted allowing the boats to deploy Type 2066 and Type 2071 decoys, and a UAP Mark 3 electronic support measures (ESM) intercept system is carried. A 'Core H' reactor is fitted to each of the boats during their long-overhaul refit periods, ensuring that none of the submarines will require further re-fuelling for the rest of their service lives.[2]

The boats are capable of deploying with a maximum of 192 independently targetable warheads, or MIRVs, with immediate readiness to fire. However, as a result of a decision taken by the 1998 Strategic Defence Review this was reduced to 48 warheads with a readiness to fire reduced 'to days rather than minutes'. Furthermore the total number of warheads maintained by the United Kingdom was reduced to approximately 200, with a total of 58 trident missiles. The reduced warhead load per missile allowed the development of lower-yield non-strategic warheads loading options.[2][4] The 2010 Strategic Defence and Security Review reduced this number further and the submarines will put to sea in future with a reduced total of 40 warheads and a reduced missile load of 8 (from a maximum possible 16). The number of operationally available nuclear warheads is to be reduced 'from fewer than 160 to no more than 120' and the total UK nuclear weapon stockpile will number no more than 180.[24]

A new pressurised water reactor, the Rolls-Royce PWR 2, was designed for the Vanguard class. This has double the service life of previous models, and it is estimated that a Vanguard class submarine could circumnavigate the world 40 times without refuelling. The reactor drives two GEC steam turbines linked to a single shaft pump jet propulsor giving the submarines a maximum submerged speed of 25 knots (46 km/h; 29 mph). Auxiliary power is provided by a pair of 6 MW steam-turbine generators supplied by WH Allen, (later known as NEI Allen, Allen Power & Rolls-Royce), and two, 2 MW Paxman diesel alternators for provision of backup power supply.[2]

A specialised Submarine Command System (SMCS) was originally developed for the Vanguard boats and was later used on the Trafalgar-class.[25]

The submarines carry the Thales Underwater Systems Type 2054 composite sonar. The Type 2054 is a multi-mode, multi-frequency system, which incorporates the 2046, 2043 and 2082 sonars. The Type 2043 is a hull-mounted active/passive search sonar, the Type 2082 a passive intercept and ranging sonar, and the Type 2046 a towed array sonar operating at very low frequency providing a passive search capability. The fleet is in the process of having the sonars refitted to include open-architecture processing using commercial off the shelf technology. Navigational search capability is provided by a Type 1007 I-band navigation radar.[2]

Two periscopes are carried, a CK51 search model and a CH91 attack model. Both have TV and thermal imaging cameras in addition to conventional optics.

Boats of the class[edit | edit source] 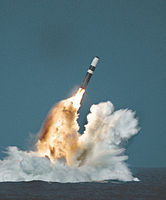 Vanguard being assisted into a Florida harbour by two civilian tugboats

HMS vigilant in the Clyde area of Scotland
Vanguard and Dragon.jpg
HMS Vanguard along side the Type 45 destroyer HMS Dragon
Add a photo to this gallery

Retrieved from "https://military.wikia.org/wiki/Vanguard-class_submarine?oldid=4539446"
Community content is available under CC-BY-SA unless otherwise noted.